Mark Twain once said, "The difference between fiction and reality is that fiction has to be believable."

I ran across a particularly good example of that yesterday over at the site Mysterious Universe.  It's the story of one Katherine Brewster, a 27-year-old woman from England, who was visiting Brazil.  On the morning of March 26, she went for a walk down a trail in the jungle... and didn't return.

I've been to the jungle -- specifically, the Amazon lowlands of Ecuador and the Taman Negara region of Malaysia -- and I can say from personal experience that they are not places where you'd want to get lost.  The jungle abounds in plants with various kinds of toxins, not to mention sharp spines.  Many of the animals there specifically want to kill you in unpleasant ways.  Because of the high biodiversity and extreme competition for niches, the organisms there have evolved some pretty terrifying adaptations -- venom, talons, and big, nasty, pointy teeth to name three.  In Malaysia, I found out that they even had terrestrial leeches -- bloodsucking critters who hide in the leaf litter and then crawl up your leg to find a nice spot to fasten on.

I'm not normally squeamish, but these guys skeeved me out so much that I took to dousing my boots daily in a repellent containing DEET.  It worked, but if I ever throw those boots away, I'm going to have to file an Environmental Impact Statement. 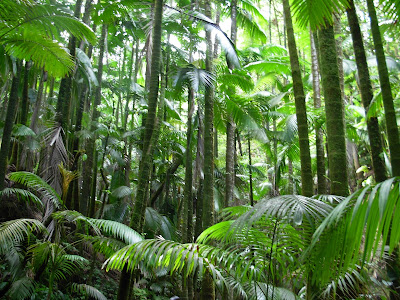 So getting lost there would be a seriously bad idea, which is why Katherine Brewster's friends and family were in a panic.  When a search party found no trace, and two, then three days went by, everyone feared the worst.  But then five days later she walked out the jungle, covered with cuts, bruises, and insect stings, saying that a "divine voice" had told her to trek into the wilderness, and while she was there she learned to talk with the plants, who had taught her how to perform photosynthesis.

At this juncture, I feel obliged to tell my readers that I'm not making this up.

Besides becoming photosynthetic, Brewster also said the plants told her about this thing called the "morphogenetic field."  Here's her explanation:


[C]onsciousness within form connects everything. We have access to the whole universe, all we need to do is to detach ourselves from the material.  We are thus the intrinsic consciousness of the universe.

Whatever that means.  As far as how she avoided starving, she said that the plants themselves told her which ones were safe to eat:

I'm not entirely sure that even if plants could talk, I'd believe what they said.  My sense is that the multiflora rose currently taking over my entire back yard, for example, is actively evil.  It's constantly doing things like sitting there, looking innocuous, then when I get a little too close, or worse, come at it with a pair of clippers, it reaches out and skewers me with thorns as sharp as hypodermic needles.  My son, who sometimes has more good intentions than sense, once attacked a multiflora rose bush with a machete.  He was successful at hacking it back some, but came out of the encounter looking like he'd been mauled by a jaguar.

Brewster, on the other hand, seemed to view everything she encountered on her little impromptu nature walk as being benevolent.  She even said she came to an understanding with the insects -- specifically, that they could bite her or sting her if they wanted to.  She said that she needed to "learn from the experience," which doesn't to me sound like an "understanding" so much as a statement of "fuck it, I give up."  I'm not sure what you could learn from a wasp sting other than "It hurts like hell," but for some reason she felt the need to let the bugs know that she meant them no harm.

My guess is that the wasps all went back to their nests and told their friends where she was.  "Go sting this chick," they probably said, in Wasp.  "She just kind of stands there with this bemused smile on her face."

Wasps are a little like multiflora rose in that respect.

So anyway, Brewster said she learned a lot from her experience, most strikingly how to synthesize her own food using sunlight as an energy source.  Myself, I didn't think that's something that could be taught.  I thought you needed all these enzyme systems and subcellular structures and so on in order to photosynthesize.  But I'm just a biologist.  What do I know about morphogenetic fields, and whatnot?

Amazingly, Brewster also says she's ready to go back in and do another Back-to-Nature trek again.  I guess the plants haven't taught her enough yet.  Maybe this time she'll learn how to make flowers come out of her ass, or something.  I dunno.  But one thing I'm sure of: the wasps are probably already preparing their welcome.
Posted by Gordon Bonnet at 2:09 AM