Nazi coins from the future

In the latest from the "News Stories That Make Me Want To Take Ockham's Razor And Slit My Wrists With It," we have a claim about an odd coin allegedly found near a construction site in Mexico.

First, the facts of the situation, insofar as I could find out.

The coin is highly weathered, and has some phrases in both German and Spanish.  It says "Nueva Alemania" ("New Germany," in Spanish) and "Alle in einer Nation" (German for "all in one nation").  There's a swastika on one side and the Iron Cross on the other, and a blurred date ending in "39."  (If you want to see a video that includes shots of the coin, there's a clip at The Daily Star showing it and its finder, Diego Aviles.)

So that's the claim.  Now let's see which of the three possible explanations proffered to account for it makes the most sense to you:
Yes, apparently there are people who think that explanation #3 is spot-on.  So it's like someone reworded Ockham's Razor to read, "Of competing explanations that account for all of the known facts, the most likely one is the one that requires 5,293 ad-hoc assumptions, breaking every known law of physics, and pretzel logic that only someone with the IQ of a peach pit could think sounded plausible."

But maybe I'm being a little uncharitable, because there are people who add to #3 some bizarre bullshit about it having to do with the "Mandela effect" and parallel universes and alternate realities.

Myself, I'm perfectly satisfied when I can explain things using the regular old reality.  But that's just me. 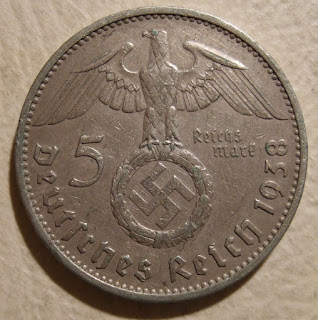 NOTE: Not the coin they found.  This one's a real Nazi coin.  [image courtesy of the Wikimedia Commons]

Over at Mysterious Universe (the first link provided above), Sequoyah Kennedy does a pretty thorough job of debunking the whole thing, ending with the following tongue-in-cheek comment that rivals this post for snark:


Maybe the only explanation is that the Antarctic Nazis develop time travel in the near future, go back in time to the 1930’s, and try to convince the Mexican government to side with them in WWII by giving them a commemorative coin, which won’t work, because that’s a ridiculous and insulting way to forge an alliance.  The commemorative future coin will then be thrown away and left to sit in the dirt until it’s unearthed in 2018.  It’s the only rational explanation, really.

Indeed.  And we should also take into account that the story was broken in The Daily Star, which is the only media source I know that rivals The Daily Mail Fail for sheer volume of nonsense.

So the coin may well exist, but I'm putting my money on "fakery."  Even the idea that it's a real coin from the 1930s doesn't bear much scrutiny, because Mexico and Germany weren't on the same side in World War II, so it'd be pretty bizarre to have some kind of Mexican Nazi currency lying around.

Of course, when the Stormtroopers come roaring out of their secret bases in Antarctica and Cancun, I suppose I'll have to eat my words.  Occupational hazard of what I do.