No hell below us, above us only sky

I think my problem is that I really don't understand religion.

I understand, or at least think I do, religious people.  I have a lot of religious friends, and mostly we get along fine, even if I am a fairly outspoken godless heathen.  I've been in many a discussion with my religious friends, and from what they've told me they believe for a variety of reasons -- it's their culture/the way they were raised to believe, it makes sense of the world around them, it's comforting, and (for some of them) they have had experiences that they interpret as being in contact with the divine.

But what I don't understand is some of the pronouncements from religious leaders, who take their own convictions about the nature of the deity and feel obliged to make sure that everyone else believes the same way.  Especially given that (1) each of said religious leaders is telling us something different, and (2) even the same religious leader can seriously change his tune from one moment to the next, as if suddenly the entire cosmos shifted and only he was aware of it.

It's this latter one that I want to address today, given Pope Francis's recent pronouncement that hell doesn't exist.  Now, let me say up front that my impression is that the Pope is a pretty cool guy.  We (obviously) don't agree on much in a doctrinal sense, but he seems like a genuinely kind and moral person. 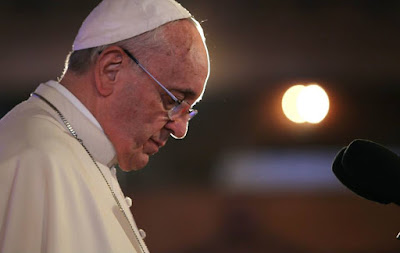 But sometimes he does say things that leave me scratching my head.  In an interview in La Repubblica conducted by Eugenio Scalfari, the Pope said the following:


They [people who die without confessing mortal sin] are not punished, those who repent obtain the forgiveness of God and enter the rank of souls who contemplate him, but those who do not repent and cannot therefore be forgiven disappear.  There is no hell, there is the disappearance of sinful souls.

Which is a little cheerier than the prospect of the Fiery Furnace.  However, there's the problem that it runs counter to The Catechism of the Catholic Church, which you think would be fairly authoritative:


The teaching of the Church affirms the existence of hell and its eternity.  Immediately after death the souls of those who die in a state of mortal sin descend into hell, where they suffer the punishments of hell, 'eternal fire.'  The chief punishment of hell is eternal separation from God, in whom alone man can possess the life and happiness for which he was created and for which he longs.

So that's awkward.  The Vatican scrambled to do damage control, and a day after the interview went public, issued the following statement:


The Holy Father Francis recently received the founder of the newspaper La Repubblica in a private meeting on the occasion of Easter, without however giving him any interviews.  What is reported by the author in today’s article [in La Repubblica] is the result of his reconstruction, in which the textual words pronounced by the Pope are not quoted.  No quotation of the aforementioned article must therefore be considered as a faithful transcription of the words of the Holy Father.

So, basically, "you weren't there and you can't prove that's what he said."

Apparently, however, it was too late, as only a few hours after the article was published, some big chunks of the ceiling of St. Peter's Basilica broke off and fell hundreds of feet to the cathedral floor.  No one was injured, but the faithful said it was a message from God that you better just forget the whole "hell doesn't exist" episode ever happened.

What I wonder about is if Pope Francis is right and hell doesn't exist, how does the Vatican justify exorcism?  Because if hell doesn't exist, then how can Satan and demons and all?  I would think that they would be first on the list of "did not repent and cannot therefore be forgiven," and would have vanished along with the rest of the sinners.  But that hasn't stopped the powers-that-be in the Catholic Church from launching a new program to train exorcists, spurred, they say, by a sudden uptick in demonic possession.  The number of possessed people in Italy alone, they say, has risen to 500,000 a year.

Which is a shitload of demons.  So from April 16 to April 21, the church is sponsoring an exorcism training course at the Pontifical Athenaeum Regina Apostolorum in Rome.  One of the course instructors, Father Cesare Truqui, said:


The fight against the evil one started at the origin of the world, and is destined to last until the end of the world.  But today we are at a stage crucial in history: many Christians no longer believe in [the devil’s] existence, few exorcists are appointed and there are no more young priests willing to learn the doctrine and practice of liberation of souls.

Pope Francis has said he agrees:


If a priest becomes aware of genuine spiritual disturbances that may be in large part psychic, and therefore must be confirmed by means of healthy collaboration with the human sciences, he must not hesitate to refer the issue to those who, in the diocese, are charged with this delicate and necessary ministry, namely, exorcists.

Now just hang on a moment.

I'll admit that I might not be the right one to try to figure this all out, given my aforementioned godless-heathen status.  But how can all of this fit together?  That is, if Eugenio Scalfari reported what the Pope said accurately, which (I note) the Pope himself hasn't denied.  Hell doesn't exist, and souls that disobeyed God simply vanish, but there are demons loose in the world who disobeyed God and didn't vanish, and they can take over humans, and if they're not exorcised by a priest said human/demon hybrids will die in sin, and vanish again, presumably for good this time.

Is there something I'm missing here?  I'm willing to admit I may just be confused.

Anyhow, that's today's missive from the world of religion.  Allow me to reiterate that I'm not trying to offend any of my religious readers; if I come off as sounding snarky it's because I'm genuinely perplexed at how someone could reconcile all of the above.  So I'm gonna just throw this out there, and go back to thinking about something that's easier to make sense of, like quantum physics.

UIPDATE:  Apparently there's a significant possibility that the interviewer might not be very reliable -- Snopes is calling his claim "unproven" and says that it's not the first time he's claimed the Pope has said something like this, without any facts to back him up.  So we'll file this one in the "well, maybe" folder for now.
Posted by Gordon Bonnet at 2:13 AM