Order out of chaos

One of the consistent criticisms I hear of the evolutionary model, as embodied in the principle of natural selection, is that it claims that order has appeared out of an essentially random process.

"You admit that mutations are random," the critic says.  "And then in the same breath, you say that these random mutations have driven evolution to create all of the complexity of life around us.  How is that possible?  Chaos can only create more chaos, never order.  For order, there must be a Designer."

Professor Armand Leroi and Bob McAllen, of the Imperial College of London, have teamed up with musician Brian Eno to demonstrate that this view is profoundly incorrect, because it misses 2/3 of what is necessary for evolution to occur.  Not only do you need mutations -- random changes in the code -- you also need two other things: a replication mechanism, and something external acting as a selecting agent.

In order to show how quickly order can come from chaos, Leroi, McAllen, and Eno created a piece of electronic "music" that was just a jumble of random notes and chords (i.e., noise).  They then allowed 7,000 internet volunteers to rate various bits of the string of notes for how pleasant they sounded.  The sum total of these votes was used by a computer program to create a second generation of the tune (replication), making a few changes each time (mutation), and then choosing to retain segments that were the most popular (selection).  The successful loops were allowed to recombine (to "have sex," in McAllen's words), creating the next generation of loops.  Then the whole process was repeated.

After 3,000 generations, a pleasant, and relatively complex, melodic riff was created -- with interlocking phrases and an interesting and steady rhythm.  It's not exactly what the rather hyperbolic headline in Why Evolution is True says it is -- "the perfect pop song" -- but for something that bootstrapped itself upwards out of chaos, it's not bad.  (McAllen created an audio clip that outlines the progression of the piece from random notes to listenable music, along with some fascinating narration of the alterations that occurred in the music over time.) 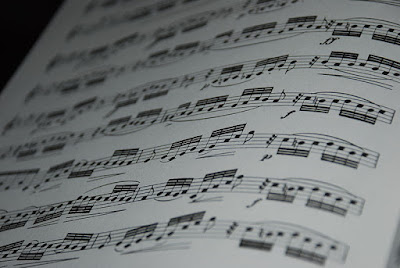 The analogy to evolution isn't perfect, in that human judges with an end product in mind (modern western music) were picking the sound combinations that matched that goal the best.  In that respect, it more closely resembles artificial selection -- in which naturally-occurring mutations result in changes to a population, and humans act to select the ones they think are the most useful.  It is in this way that virtually every breed of domestic animal has been created, most of them in the past thousand years.

But still, as a first-order approximation, it's not bad, and certainly gives a nice answer to people who think that chaos can never give rise to order without the hand of a Designer.  It turns out that no Designer is necessary, as long as you have something acting as a selecting mechanism -- even if that something is as simple as 7,000 people on the internet giving a thumbs-up or thumbs-down to tiny fragments of a musical passage.  In the natural world, with the powerful dual selectors of survival and reproduction, and two billion years to work, it suddenly ceases to be surprising that the Earth has millions of different and diverse life forms -- although that fact is, and always will be, a source of wonderment and awe for me even so.
Posted by Gordon Bonnet at 2:02 AM