In further adventures of friends and loyal readers of Skeptophilia trying to induce me to do a skull-fracture-inducing faceplant, today we have: "Real Water."

I bet you thought you were fine drinking regular old tap water.  I know that's what I thought.  But little did I know that tap water (and other sorts of water) are "damaged."  Here's a direct quote from their website:


Most of the drinking water is stripped of valuable electrons, making the water acidic and creating free radicals.

Free radicals steal electrons from the body’s cells.  This is called Free Radical Damage and it is the cause of many serious health conditions.  They operate much like rust on a car, zapping people from their life force.

So the claim, apparently, is, "the more electrons, the better."  This comes as a bit of a surprise, because when large amounts of electrons are contributed to someone's body all at once, this is called "being struck by lightning."  The result is called "electrocution," and frequently, "death."

But that doesn't stop the "Real Water" people, who tell us that they somehow put the missing electrons back in:

Like many woo-woo claims, this one has a few grains of truth.  Antioxidants do exist, and they do neutralize free radicals that (left unchecked) would oxidize organic compounds.  One of the most common free radicals in living systems is the peroxide ion (O2-), and we actually make three enzymes to deal with it -- catalase, superoxide dismutase, and glutathione peroxidase.  Given that peroxide ions and other free radicals would build up and kill us without them, it's a little unlikely that we'd have evolved just to sit around until the Real Water company came along to provide us with "alkalinized water" to deal with the problem.

We also get antioxidants in our food, especially vitamins C and E, and selenium.  However -- and this is important -- extensive studies have shown that taking supplements of any or all of these has no effect on the incidence of either cancer (often attributed to free radical damage) or degenerative diseases like Alzheimer's.  So the whole antioxidant craze is a conglomeration of small amounts of actual science mixed with a heaping helping of hype and outright falsehood. 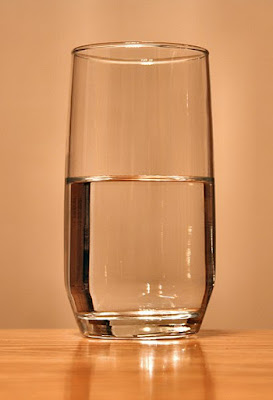 Don't be fooled by how harmless this looks.  It could be hosting free radicals.  Or evil spirits.  Or something.  [Image courtesy of the Wikimedia Commons]

Then there's the aquaporin thing.  Those do exist, and in fact are critical for moving water into and out of cells (water can pass through cell membranes, but slowly).  However, there is absolutely no evidence that creating "stable negative ionization," or (as the site also claims) "structuring water," makes a difference with regards to how the body uses it.  If you don't believe me, humble biology teacher that I am, maybe you'll accept the word of Stephen Lower, Professor Emeritus of Chemistry at Simon Fraser University:


Any uncertainty that the chemistry community may have about the nature and existence of water clusters is not apparently shared by the various "inventors" who have not only "discovered" these elusive creatures, but who claim findings that science has never even dreamed of!  These promoters have spun their half-baked crackpot chemistry into various watery nostrums that they say are essential to your health and able to cure whatever-ails-you.  These benificences are hawked to the more gullible of the general public, usually in the form of a "concentrate" that you can add to your drinking water— all for a $20-$50 charge on your credit card.

Some of these hucksters claim to make the water into "clusters" that are larger, smaller, or hexagonal-shaped, allowing them to more readily promote "cellular hydration" and remove "toxins" from your body.

The fact is that none of these views has any significant support in the scientific communities of chemistry, biochemistry, or physiology, nor are they even considered worthy of debate.  The only places you are likely to see these views advocated are in literature (and on websites) intended to promote the sale of these products to consumers in the notoriously credulous "alternative" health and "dietary supplement" market.

And one last thing: "acid" doesn't mean "bad" and "alkaline," "good."  In fact, one of the major functions of your kidneys is to maintain your blood pH, and if that didn't work, you'd drop dead of blood acidosis every time you drank a glass of lemonade, which (at a pH of around 3) has 10,000 times the number of hydrogen ions per milliliter as tap water does.  If you are in any doubt as to how tightly this system is controlled, let me elaborate:

So even if "Real Water" could alkalinize your blood, the result would not be better health, or protecting you from rusting, or whatever the fuck it is they're claiming.

And at $36 (plus shipping and handling) for a twelve-pack of one-liter bottles, it's not cheap.  The bottom line: "Real Water" is primarily aimed at people with more money than sense.

Anyhow.  That's today's helping of pseudoscience.  Me, I'm going to go get a cup of plain old tap water, heated up, to which has been added ground up toxin-free all-natural free-radical-busting aura-protecting seeds from the sacred plant Coffea arabica.

Each week (more often if I find something really cool) I'll post a link to a book that should be required reading for all skeptics.  This week I'll start with a classic: Carl Sagan's The Demon-Haunted World: Science as a Candle in the Dark.  If you haven't read this one, you should rectify that error immediately!