Relics of a lost world

There are times that I get impatient with people doing what I call hypothesizing in a vacuum -- coming up with pointless "what ifs" that are unverifiable.  A lot of it seems to me to be useless mental messing-about that doesn't tell us anything new about how the universe actually works.

So it was a little surprising that I reacted as positively as I did to the paper that appeared last week in the International Journal of Astrobiology called, "The Silurian Hypothesis: Would It Be Possible to Detect an Industrial Civilization in the Geological Record?" by Gavin Schmidt and Adam Frank.  The authors write:


One of the key questions in assessing the likelihood of finding such a civilization is an understanding of how often, given that life has arisen and that some species are intelligent, does an industrial civilization develop?  Humans are the only example we know of, and our industrial civilization has lasted (so far) roughly 300 years (since, for example, the beginning of mass production methods).  This is a small fraction of the time we have existed as a species, and a tiny fraction of the time that complex life has existed on the Earth’s land surface (∼400 million years ago, Ma).  This short time period raises the obvious question as to whether this could have happened before.  We term this the "Silurian Hypothesis."

You're reading this correctly; the authors are trying to parse whether we could detect the presence of an industrial civilization on Earth -- if it last existed, say, 250 million years ago.

They're not the first ones to think about this.  It's showed up in fiction, most notably in the short story "At the Mountains of Madness" by H. P. Lovecraft, wherein some explorers in Antarctica discover a colossal ruin that is not centuries, or even millennia, old, but tens of millions of years old -- when Antarctica was far north of its present location and had a tropical climate, and when it was inhabited by an intelligent civilization that was decidedly not human.  Being Lovecraft, of course this discovery presages several of the main characters losing important body parts, but I still remember that when I first read this story, when I was maybe fifteen years old, it wasn't the horror element that struck me most; it was the idea that maybe 90 million years ago, the world hosted a non-human intelligence of which most of the traces had been wiped out.

Schmidt and Frank first look at the likelihood of we ourselves becoming fossils, and they conclude that the answer is -- it's not very high:


The fraction of life that gets fossilized is always extremely small and varies widely as a function of time, habitat and degree of soft tissue versus hard shells or bones.  Fossilization rates are very low in tropical, forested environments, but are higher in arid environments and fluvial systems.  As an example, for all the dinosaurs that ever lived, there are only a few thousand near-complete specimens, or equivalently only a handful of individual animals across thousands of taxa per 100,000 years.  Given the rate of new discovery of taxa of this age, it is clear that species as short-lived as Homo sapiens (so far) might not be represented in the existing fossil record at all.

So the mind-blowing outcome of this reasoning is that the vast majority of species that have ever lived left no fossil record at all -- and that our knowledge of prehistoric life is so scanty that using the word "incomplete" to describe it is a woeful understatement. 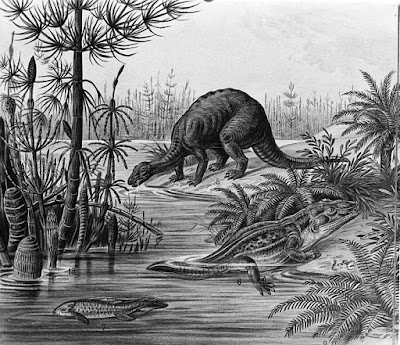 [Image courtesy of Wellcome Images and the Wikimedia Commons]

As far as our artifacts, they're not much more hopeful:


The likelihood of objects surviving and being discovered is similarly unlikely. Zalasiewicz (2009) speculates about preservation of objects or their forms, but the current area of urbanization is less than 1% of the Earth’s surface, and exposed sections and drilling sites for pre-Quaternary surfaces are orders of magnitude less as fractions of the original surface.  Note that even for early human technology, complex objects are very rarely found. For instance, the Antikythera Mechanism (ca. 205 BCE) is a unique object until the Renaissance.  Despite impressive recent gains in the ability to detect the wider impacts of civilization on landscapes and ecosystems, we conclude that for potential civilizations older than about 4 Ma, the chances of finding direct evidence of their existence via objects or fossilized examples of their population is small.

Of course, the thing is, all it would take is one single artifact; you don't need an entire city to be preserved (as it was in Lovecraft).  We've made a number of very durable things -- of which, surprisingly, glass is one of the most resistant.  Most metal objects corrode on the scale of a human lifetime, much less millions of years; and plastics, long thought of as indestructible, are likely to break down to microscopic dust within a few centuries.  Any Jurassic-era plastics would long since be undetectable.  But a single glass marble or fragment of a drinking glass, encased in sediment -- that'd definitely do the trick.

Schmidt and Frank aren't the only scientists to consider the question.  Alan Weisman, in his fascinating book The World Without Us, considers the sequence of events that would occur if humanity disappeared, and concludes that not only would life march on just fine, most of our impacts would be gone in short order.  Within three days, he says, all the lights would have gone out; the loss of electricity would have results like the entire New York City subway system, and most of New Orleans, flooding.  Structures in tropical climates -- like the Panama Canal and most cities within twenty degrees either side of the Equator -- would be overgrown and swallowed by jungle within a few decades.  Within five hundred years, Weisman says, just about all that would be left is aluminum cookware, plastic residue, some of the more durable glass objects, remnants of buildings, especially in dry climates, and monuments like Mount Rushmore.

And that's after five hundred years.  Which is 0.001% of fifty million years -- and even that time span doesn't bring us back to the extinction of the dinosaurs.

What's fascinating about this study is that Schmidt and Frank aren't trying to tell us that there have been ancient civilizations in previous eras; they're simply considering the question of whether it'd be detectable if there had been.  And the answer is: probably not.  Even such factors as an industrial civilization's impact on the climate and the chemistry of the atmosphere might not leave traces that would still be discernible a hundred million years later.  The authors end their paper thusly:


Perhaps unusually, the authors of this paper are not convinced of the correctness of their proposed hypothesis.  Were it to be true it would have profound implications and not just for astrobiology.  However most readers do not need to be told that it is always a bad idea to decide on the truth or falsity of an idea based on the consequences of it being true.  While we strongly doubt that any previous industrial civilization existed before our own, asking the question in a formal way that articulates explicitly what evidence for such a civilization might look like raises its own useful questions related both to astrobiology and to Anthropocene studies.  Thus we hope that this paper will serve as motivation to improve the constraints on the hypothesis so that in future we may be better placed to answer our title question.

Which is it exactly.  Science isn't just the description of what we know, it also asks questions like "What would the universe look like if X were true?"  The ability to create a model of some version of reality, and then see if the predictions of that model line up with the evidence, is a powerful tool for understanding.

So as bizarre as it seems, apparently it is likely that even if there were a highly advanced industrial civilization that got wiped out by the Permian-Triassic Extinction 252 million years ago (along with damn near everything else; paleontologists Jack Sepkoski and David Raup, who specialize in studying the cheerful topic of mass extinctions, have estimated that the Permian-Triassic event obliterated 95% of the species on Earth), we would probably not have a single detectable trace of it left.

But maybe, just maybe, there's an Eldritch Cyclopean City still awaiting discovery somewhere.  Like Antarctica.  If so, though, I'm not going to be the one who explores it.  When that happened in Lovecraft's story, it resulted in a number of people having their brains sucked out by Shoggoths.

Which could seriously ruin one's day.