I know that I'm not exactly a model of restraint when it comes to holding my tongue about outrageous statements, but you'll have to take my word for it that I really tried with this one.

It was only after about the tenth time I saw a screencap of a woman's Twitter post, along with people sharing it and saying "fuck yeah!" and high-fiving each other that it pushed me over the edge.  Here's the image: 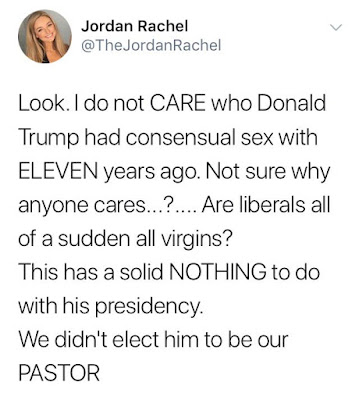 The layers of "I Don't Get It" here are so numerous that I don't know where to start.  But I'll try.  In no particular order:
So the fact is, all of this does have to do with his presidency.  Which is obvious if you consider how Fox News, Sean Hannity, and the other Trump apologists would have reacted if President Obama had done 1% of what Trump has done, and thus far, gotten away with.  When prior to the election, Trump bragged that he could shoot someone in plain sight on 5th Avenue and not lose a single supporter, I thought at the time he was just engaging in his typical hyperbole.

Now, I see that it's the literal truth.

Look, I know we all tend to give politicians we like a bye on questionable behavior.  For one thing, the sunk-cost fallacy pushes us to stick with someone when we've put a lot of our time, effort, money, and emotional energy into seeing him or her elected.  But this goes way beyond sunk-cost.  This amounts to a significant subset of Americans -- 39%, by the latest polls -- who look at the mounting scandals, accusations, and unethical (if not illegal) behavior, and shrug their shoulders.

Or disbelieve it.  Or don't even hear about it.  (Speaking of Fox News.)

So don't start with me that this is about liberals suddenly turning into prudes, or how these allegations have nothing to do with Trump's presidency.  And if you really think that "Jordan Rachel" made a good point in her now-viral tweet, you're being disingenuous at best, and a willful hypocrite at worst.