I know that when I was in Malaysia three summers ago, it brought home the fact that we're on a spinning ball as vividly as anything could have.  Malaysia is exactly twelve hours different from upstate New York, so when I Skyped home with my wife, I was getting ready to go to dinner while she was getting ready to go to work.  Showing her a horizon with a sunset while she was showing me a horizon with a sunrise was a little surreal.

That Australia is a figment of our collective imaginations was brought to my attention by a friend who, and the irony of this is not lost on me, lives in Australia.  My comment to her was that I wished she'd told me ages ago that she was nonexistent.  I mean, friends should own up about stuff like this, you know?  It was a little hurtful that all this time, I've been talking to someone imaginary, and I didn't even know it. 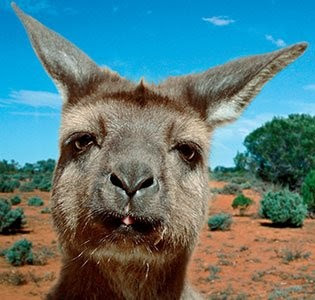 So I guess that means that kangaroos don't exist, either, which is kind of a shame.  [Image courtesy of the Wikimedia Commons]

As far as the Flerfs, the article I linked above has some explanations (if I can dignify them by that term) of what they think is going on, apropos of Australia.  Here are some especially inspired ones:


Everything you have ever heard about [Australia] was made up, and any pictures of it you have seen were faked by the government.

I am sure you have even talked to people on the internet who claim to be from Australia. They are really secret government agents who are surfing the internet to enforce these false beliefs.

We are not entirely sure why the government made up an imaginary continent, or why it is trying to convince the world that this continent is real, but we can tell you that we know for a fact that Australia doesn’t really exist.

Another person said that any Australians you happen to know are "computer-generated," and said the hoax has been going on for centuries, despite the fact that CGI kind of didn't exist in the 18th century:


Australia is not real. It’s a hoax, made for us to believe that Britain moved over their criminals to someplace.

In reality, all these criminals were loaded off the ships into the waters, drowning before they could see land ever again.

It’s a coverup for one of the greatest mass murders in history, made by one of the most prominent empires.

So that's kind of sinister.  But what about people who claim to have gone there, and seen the place, as advertised?  They've got a response for that, too:


[T]he ‘plane pilots’ are in on this secret.  Instead of flying you to Melbourne or Sydney, they fly you to islands close nearby ‘or in some cases, parts of South America, where they have cleared space and hired actors to act out as real Australians.

Well, okay, maybe Australia doesn't exist, but what about other countries in the region?  Does Papua-New Guinea exist?  I have to admit Birds of Paradise are weird enough that they could well be a hoax. 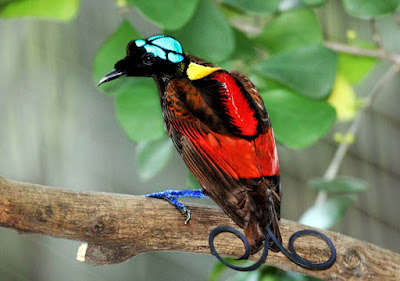 But what about Indonesia?  And Japan?  And China?  I mean, they're all way closer, time-zone-wise, to Australia than they are to us.  Why have they singled out Australia?

Then there's Malaysia, which I can verify exists because as I mentioned earlier, I've been there.  (Actually, I stopped along the way in Hong Kong, but maybe that was secretly part of South America.  I wasn't there long enough to check.)  But given the fact that the flight back -- from Hong Kong to La Guardia Airport in New York City -- had me in the air for sixteen hours, I can say with some certainty that those two places are not located near each other.

Not that I'd expect any of this to be convincing to your average Flerf, who has long ago jettisoned anything like "evidence" as a road to understanding.  Me, I'm still wondering what to do about my imaginary and/or computer-generated Australian friend.  Given that she's the one who sent me the link, it's kind of rubbing my face in it, you know?  On the other hand, if she doesn't actually exist, I probably shouldn't worry about it.