Vitriol in the mailbox

Whenever I write a post that's critical of Donald Trump, I always cringe a little as my finger is poised above the "Publish" button.

Because it never fails to result in hate mail, which runs the gamut from implications that I'm hopelessly stupid to spittle-flecked, obscenity-laden screeds, many of which make suggestions that would not have been anatomically possible even when I was in my twenties and was a great deal more flexible.

I've never seen anything quite like this.  I've written this blog for going on eight years, and during that time I have been critical of a large number of public figures.  Those public figures represent a reasonably good cross-section of political and philosophical ideologies; I try my best to be even-handed and criticize faulty thinking wherever I see it, regardless of whether the person in question belongs to the political party I favor.

So, as you might expect, people often take exception to what I say, and pretty frequently will come back at me with some kind of response, question, or rebuttal.  This is fine.  I have no problem being challenged; if I did, I wouldn't be a blogger, I would stay home and talk to my dog, who no matter what I say looks at me with this adoring expression that says, "Good heavens!  I would never have thought of that!  That's absolutely brilliant!"

But I have never seen anything like the vitriol that gets thrown at me over Donald Trump.  There's something about him that seems to incite either blazing hatred or defend-till-death loyalty.  I find this a little puzzling, but it played out again apropos of my post from two days ago, wherein I described the peculiar evidence-resistance I've seen in Trump and his spokesperson Sarah Huckabee Sanders, wherein they will not admit to being wrong even when the facts are incontrovertible.  Here are just a few of the responses I got within twenty-four hours of the post.  I'm leaving out the ones that were pure vulgarity, because you can only write "go fuck yourself" so many times.


You liberals are doomed.  You know that, right?  We threw away the elephant and the donkey, and elected a lion.  You're [sic] days are numbered.

Correct me if I'm wrong, but the polls aren't really bearing this out.  Support for Trump dwindled into the low 30s by mid-2017 and have pretty much stayed there, and most pundits are predicting that the Democrats are poised to have a good shot at taking back both the House and the Senate.  Now, I'm well aware that a lot can happen between now and November.  Hell, given the last week's headlines, a lot can happen between now and next Thursday.  But even so, the "lion" seems to be in some serious jeopardy of ending up in a very, very small cage.

What part of Trump is in the WH do you not understand?

I understand who the president is all too well, thanks.  My primary concern at the moment is not wishing someone else had won, it's wishing he wouldn't lie every time he opens his damn mouth, not to mention do something idiotic that gets us into yet another war.  And if you don't see him as  increasingly erratic, you're not paying attention.  To take one example (of many), consider his calling out Obama for making public a plan to send the military into Syria, then posting a tweet that... made public a plan to send the military into Syria.  The only difference was that this one came along with a slam against Russia for supporting Assad.  Then -- twenty minutes later -- he backpedaled and said our relationship with Russia is just fine.  And followed it up with saying that he didn't really say he was going to bomb Syria, and if he did, he didn't tell them the actual launch date, so it was all cool.

The man is a petulant, moody, ignorant toddler, whose response to everything is to call people names, lie, and sulk.  And I'd feel this way regardless of which political party he belonged to.  He could agree with me on damn near every political stance there is, and he'd still be completely unfit to run the country.


Finally we have someone whose [sic] doing something about stopping the immigrants from taking over, and people like you can't handle it.  Let's see how you feel when sharea [sic] law is declared in your home town.

Let me quote from my own post: "I'm not here to discuss immigration policy per se.  It's a complex issue and one on which I am hardly qualified to weigh in."  I never once said, either in that post or in any other, whether I'm for tightening or loosening immigration laws, whether I support DACA, whether there should be amnesty for illegals living in the United States, and so on.  (And I'm not going to.  When I don't feel qualified to comment on a topic, I don't comment on it.)  What I did comment upon was that both Trump and Sanders have said that illegal immigration is increasing now, and increased steadily throughout the Obama presidency, both of which are simply false.  I'm not so much concerned with the specific topic of immigration as I am with the fact that the president seems to be incapable of telling truth from fiction.


There has never been a president who has been so abused, so criticized, and had so many roadblocks placed in his way.  People criticize him for not accomplishing his agenda, but he's spending so much of his time defending himself against unfair attacks and criticism that it's no wonder.

First, allow me to point out that if a Republican president with a Republican Senate, Republican House, and Supreme Court dominated by conservatives can't achieve his agenda, it's hardly the fault of the Democrats. But about the abuse -- geez, how short a memory do you have?  Every president gets a dose of criticism (fair and unfair), ridicule, and so on, but have you forgotten what happened when Obama was elected?  The man couldn't wear a tan suit without Fox News having a complete meltdown.  He had a Supreme Court nomination stalled for nine months (an act that Mitch McConnell said was "the proudest moment of [his] political life"), resulting in the nomination never coming to a vote, something that was completely unprecedented.  And as far as how he was treated by the voters, do you remember this photograph? 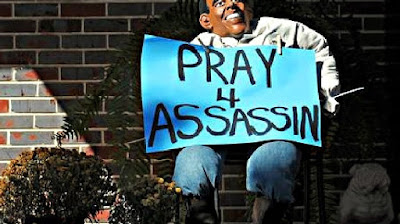 Oh, wait, maybe you didn't see it, because it was never mentioned by Tucker Carlson, Rush Limbaugh, or Sean Hannity.  And it's only one of many.  If you do a Google image search for "Obama lynched in effigy," you'll see what kind of shit he and his family had to face on a daily basis.

So anyway.  I've probably just opened myself up to another waterfall of vitriol, which is fine.  Like I said, I'm used to it; it's an occupational hazard of what I do.  But the point I made in my original post still stands; if you hold a stance, and you are presented with hard, unassailable facts that the opposite is true, the only honest thing to do is to admit you were wrong, not to claim that you "still feel you're right" or that there are "alternate facts."

And sending the person who pointed it out anatomically impossible suggestions really doesn't help your case much.
Posted by Gordon Bonnet at 2:19 AM