Today we're going to take a break from subatomic physics and the Big Bang, not to mention the current state of political affairs (and I'm using that in both senses of the word) in the United States, to consider:

DNA tests that are designed to see if you have alien ancestry.

As with so many of the topics I address here at Skeptophilia, I owe this one to Reddit, that amazing clearinghouse for ideas from profound to ridiculous to completely baffling.  The post on Reddit that clued me in to the fact that alien DNA testing is a thing lands toward the "baffling" end of that continuum, although to be fair, the person who found it posted it on r/Skeptic, so they clearly didn't believe it themselves.

It was accompanied by a screencap of the offer on eBay, which I include below: 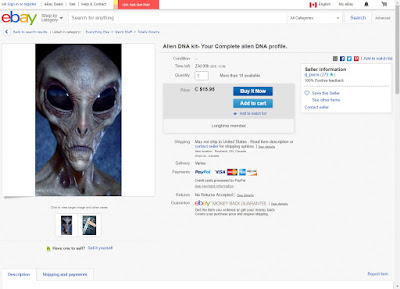 Being that the print is a little small, let me list the salient features:
So to any of my Canadian readers who don't mind sacrificing sixteen bucks for a little empirical research, I encourage you to buy a kit, and let us know here at Skeptophilia headquarters about the results.

Having a background in genetics, however, I have to wonder what they're using for their basis of comparison.  I know that in the historical documentary The X Files, the government had lots of deep-frozen alien babies in a lab somewhere, which (of course) Mulder found and (of course again) Scully didn't get to see.  So did they do a genetic analysis of the alien babies?

More importantly, why am I putting so much effort into analyzing this?

My general feeling is that even if alien intelligence exists, it's extremely unlikely that it will have a similar biology to ours, and even less likely that it will encode its genetic material the same way.  (Witness the fact that even related terrestrial species, who have fairly recent common ancestry, can't interbreed.)  So the chance of human/alien hybridization is nil, and that's even assuming they have naughty bits that are of the right size and shape to be compatible with ours.

Anyhow, that's our dip in the deep end for today.  And if you turn out to have alien DNA, I'm sorry if I sounded scornful.  I don't mean to insult your family.

Although I'd make an exception in the case of Rudy Giuliani.