Several times here at Skeptophilia headquarters we've made fun of people predicting the end of the world, be it from a collision with the planet Nibiru, an alien invasion, and the Borg cube draining the Sun of energy (no, I swear I'm not making that one up), not to mention the depredations of the Four Apocalyptic Horsepersons.  Until yesterday, however, I didn't know the scale of the problem.  A friend and loyal reader sent me a list of predicted end dates -- and all I can say is, we're not out of the woods yet.

As if we didn't have enough to worry about, what with impending ecological catastrophes, wars breaking out, and sociopaths in leadership roles in government, now we have to worry about the world ending over and over.  So without further ado, here's what we're in for:
So there you have it; eight times the world's gonna end.  And those are just the ones in the future.  The same list includes 173 dates the world has ended in the past (I shit you not) including several by such luminaries as Martin Luther, Jerry Falwell, Christopher Columbus, and Cotton Mather (Columbus and Mather each predicted the end three separate times). 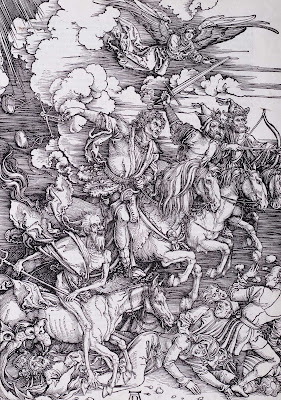 Albrecht Dürer, The Four Horsemen of the Apocalypse (ca. 1497) [Image is in the Public Domain]

Interesting that 173 failures in a row doesn't stop the apocalyptoids from claiming that okay, we've been wrong before, but this one's real, cross our hearts and hope to die in shrieking agony as the world burns.  Myself, I'd be a little discouraged by now.  It must be disappointing to think you're going to see the Rivers Running Red With The Blood Of Unbelievers a week from next Tuesday, and then you have to go to work the next day as if nothing happened, which it did.  At least we only have till June to wait for the next time the world is going to end, so we won't be kept in suspense for much longer.