Centennial of a curious fellow

A hundred years ago today, groundbreaking physicist Richard Feynman was born in Manhattan, New York.  I first bumped into Feynman when I was in high school, and I found out about "Feynman diagrams" -- a way of looking at particle interactions that was simple and elegant, but raised profound questions about the nature of time.  (Specifically, why there's an "arrow of time" -- that time always proceeds in the same direction -- when Feynman diagrams imply that either direction is equally likely.)

Then in the mid-80s, I read his autobiography, Surely You're Joking, Mr. Feynman!  I picked it up because I'm fascinated with physics, but when I read his book, I was blown away with how playful he was about it.  He was the opposite of the stereotypical science nerd -- he has whole chapters devoted to strategies for picking up women, his (successful) attempt to convince an Italian man he was speaking Italian (just a different dialect), performing on the bongos, and various practical jokes he'd played.

One of these -- the chapter entitled "Who Stole the Door?" -- is required reading in my Critical Thinking classes, when we're discussing ethics.  The central question is, has a person lied when he tells the truth so unconvincingly that no one believes him?  (For the details, you'll just need to read the book.)

Of course, Feynman had a serious side, and his contributions to subatomic particle physics and quantum electrodynamics won him the Nobel Prize in Physics in 1965 (along with Shin'ichiro Tomonaga and Julian Schwinger).  His Feynman Lectures on Physics, now a classic of science literature, started as his attempt to improve undergraduate pedagogy at CalTech, and is still considered groundbreaking -- a 2013 review in Nature said of them that they embody "simplicity, beauty, unity ... presented with enthusiasm and insight."  His enthusiasm for the topic never waned.  "Physics is like sex," he said.  "Sure, it may give some practical results, but that's not why we do it." 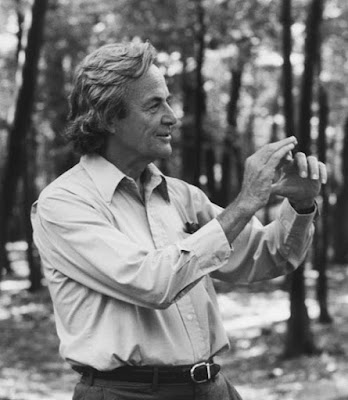 He was also quick to criticize his colleagues, and the scientific endeavor in general.  It was all very well to specialize, he said, but the disdain some scientists show for broad-based general knowledge was completely wrong-headed.  "In this age of specialization men who thoroughly know one field are often incompetent to discuss another," he said, at a luncheon at CalTech where he was the keynote speaker.  "The great problems of the relations between one and another aspect of human activity have for this reason been discussed less and less in public.  When we look at the past great debates on these subjects we feel jealous of those times, for we should have liked the excitement of such argument.  The old problems, such as the relation of science and religion, are still with us, and I believe present as difficult dilemmas as ever, but they are not often publicly discussed because of the limitations of specialization."

However, Feynman was unequivocal about well-done science being the ultimate arbiter of truth.  In a lecture he did at the University of Auckland in 1979, he said:


There's a kind of saying that if you don't understand its meaning, "I don't believe it. It's too crazy. I'm not going to accept it."…  You'll have to accept it.  It's the way nature works.  If you want to know how nature works, we looked at it, carefully.  Looking at it, that's the way it looks.  You don't like it?  Go somewhere else, to another universe where the rules are simpler, philosophically more pleasing, more psychologically easy.  I can't help it, okay?  If I'm going to tell you honestly what the world looks like to the human beings who have struggled as hard as they can to understand it, I can only tell you what it looks like.

His skepticism comes shining through in many of his writings and speeches.  He was unimpressed by claims of the paranormal, and showed up what he thought of synchronicity at the beginning of one of his talks:


You know, the most amazing thing happened to me tonight.  I was coming here, on the way to the lecture, and I came in through the parking lot.  And you won't believe what happened.  I saw a car with the license plate ARW 357.  Can you imagine?  Of all the millions of license plates in the state, what was the chance that I would see that particular one tonight?  Amazing!

He was up front about being an atheist.  "Agnostic, for me," he said, "would be trying to weasel out and sound a little nicer than I am about this."

He exited the world with his characteristic humor.  His last words before his death in 1988 from complications of liposarcoma are said to have been, "I'd hate to die twice.  It's so boring."

When people come up with scientists and other intellectual figures who represent the heights of brilliance, Einstein usually comes up as the apex, the pinnacle of what the human brain can accomplish.  Myself, I always think of Richard Feynman, who not only was smart enough to comprehend the innermost workings of the universe, but tempered it with self-deprecating humor.  And what stands out to me most is his driving, insatiable curiosity.  As he put it in The Meaning of It All: Thoughts of a Citizen Scientist:


It is a great adventure to contemplate the universe, beyond man, to contemplate what it would be like without man, as it was in a great part of its long history and as it is in a great majority of places.  When this objective view is finally attained, and the mystery and majesty of matter are fully appreciated, to then turn the objective eye back on man viewed as matter, to view life as part of this universal mystery of greatest depth, is to sense an experience which is very rare, and very exciting.  It usually ends in laughter and a delight in the futility of trying to understand what this atom in the universe is, this thing — atoms with curiosity — that looks at itself and wonders why it wonders.  Well, these scientific views end in awe and mystery, lost at the edge in uncertainty, but they appear to be so deep and so impressive that the theory that it is all arranged as a stage for God to watch man's struggle for good and evil seems inadequate.