I still recall my astonishment when one of my physics professors in college said, "We understand the physics of the universe fairly well back to about one-trillionth of a second after the Big Bang.  Before that, though, things are a little dicey."

To me, that sounded like having a pretty good handle on things, but that first one-trillionth of a second was pretty spectacular.  There were some extraordinary things going on very early along in that tiny time span -- from about 10−36 to sometime between 10−33 and 10−32 seconds after the initial singularity.  For those of you who are not mathematical types, this is the time between:

This era is called the "inflationary period," a term that was coined by Alan Guth (then at Cornell) and Andrei Linde of Stanford, way back in 1979, who were investigating the question of why there are no magnetic monopoles (magnetic particles with only a north or south pole, but not both) and stumbled upon a phenomenon called a false vacuum that accounted for the known properties of matter and the universe.  The problem was, the mathematics of the false vacuum required a period extremely early on in the universe's history when it underwent exponential expansion.  If you thought the time duration of inflation defied the imagination, the size expansion is worse -- in that minuscule fraction of a second, the universe increased in volume by a factor of 1078 -- one followed by 78 zeroes.

(Regular readers of Skeptophilia may remember that a while back, I wrote about a rather hysterical article that was making the rounds, speculating about the likelihood of our false vacuum state being superseded by a true vacuum -- which would rapidly destroy the entire universe.  The general conclusion of the physicists is that the risk of this is close enough to zero that you shouldn't be losing any sleep over it.) 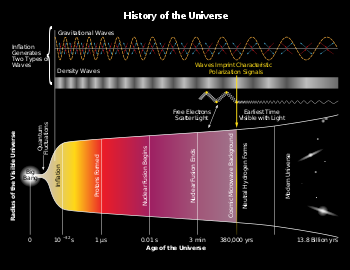 As crazy as this sounds, it's been borne up by the evidence.  The vast majority of the research done on this topic is far beyond me even considering my B.S. in physics, but suffice it to say that most physicists accept inflation as a reality.  It accounts for a number of interesting phenomena, including isotropy -- that the universe looks homogeneous no matter what direction you look, which begs an explanation unless you think that the Earth is located in the dead center of the universe, a possibility that is even less than our risk of being destroyed by a true vacuum.  So it may sound hard to believe, but apparently, this enormous expansion in an unimaginably tiny fraction of a second actually happened.

Just last week there was another piece of evidence added to all of this, wherein scientists at the University of Maryland created a peculiar form of matter called a Bose-Einstein condensate that exhibited the properties of cosmic inflation, albeit (and fortunately) on a much smaller scale.  Emily Conover, over at Science News, describes the experiment as follows:


Shaped into a tiny, rapidly expanding ring, the condensate grew from about 23 micrometers in diameter to about four times that size in just 15 milliseconds.  The behavior of that widening condensate re-created some of the physics of inflation, a brief period just after the Big Bang during which the universe rapidly ballooned in size (SN Online: 12/11/13) before settling into a more moderate expansion rate.

In physics, seemingly unrelated systems can have similarities under the hood. Scientists have previously used Bose-Einstein condensates to simulate other mysteries of the cosmos, such as black holes (SN: 11/15/14, p. 14).  And the comparison between Bose-Einstein condensates and inflation is particularly apt: A hypothetical substance called the inflaton field is thought to drive the universe’s extreme expansion, and particles associated with that field, known as inflatons, all take on the same quantum state, just as atoms do in the condensate.

Another point in favor of this research having recreated on some level the early expansion of the universe is that sound waves sent through the condensate increased in wavelength -- just as light has been red-shifted by the expansion of the space it's traveling through.

I'd be lying if I said I understood last week's paper on anything but the most rudimentary level, but it still gives me a sense of wonder that we can peer into the distant past -- into a time that lasted almost no time at all -- and use that information to draw conclusions about why the universe has the properties it does.   The progress we've made in expanding scientific understanding, in just the last twenty years, is mind-boggling.

All of which makes me wonder what the next twenty years will bring.  I'm hoping it's a warp drive, but that might be a forlorn hope, given that the General Theory of Relativity is strictly enforced in most jurisdictions.