Faces in the woods

One of the first things I ever wrote about in this blog was the phenomenon of pareidolia -- because the human brain is wired to recognize faces, we sometimes see faces where there are only random patterns of lights and shadows that resemble a face.  This is why, as children, we all saw faces in clouds and on the Moon; and it also explains the Face on Mars, most "ghost photographs," and the countless instances of seeing the face of Jesus on grilled cheese sandwiches, tortillas, and concrete walls.

When I first mentioned pareidolia, eight years ago, it seemed like most people hadn't heard of it.    Recently, however, the idea has gained wider currency, and now when some facelike thing is spotted, and makes it into the mainstream press, the word seems to come up with fair regularity.  Which is all to the good.

But it does leave the woo-woos in a bit of a quandary, doesn't it?  If all of their ghost photographs and Faces on Mars and grilled cheese Jesuses (Jesi?) are just random patterns, perceived as faces because that's how the human brain works, what's a woo-woo to do?

Entitled "A Visit With the Nature Spirits," the author admits that pareidolia does occur:


How do you see nature spirits in trees?  You use pareidolia, a faculty of the mind that enables you to see patterns in objects where none supposedly exist.  It’s how we see faces and shapes and animals in water, rocks, and tree trunks.  Conventional psychology regards this faculty as pure imagination, but if it is used in a certain way, it can open you up to subtler realities of which conventional psychology is unaware.

Okay, so far so good.  So how do we tell the difference between imagining a face (which surely we all do from time to time), and seeing a face because there's a "nature spirit" present?  We can't, the writer says, because even if it is pareidolia, the spirits are still there.  She gives an example:


“Trees like to express their environment,” she observes, and so create forms, such as burls, in their bark to reflect what they experience.  I could see the figures she described, although my immediate impression had been that of an energy like that of an octopus.  Atala explained that various people will see different images and aspects of the trees’ energy.  Overall her experiences of the nature spirit were more visual (she took many photographs), while mine were more kinesthetic.  It’s possible that with the pine tree, I was simply picking up certain tendrils of energy that it was extending toward me.

So, in other words -- if I'm understanding her correctly -- even if analysis of the photograph showed that the image we thought was a Nature Spirit turned out to be a happenstance arrangement of leaves and branches, it's still a Nature Spirit -- it's just that the Spirit used the leaves and branches to create his face?  (At this point, you should go back and click the link, if you haven't already done so, it includes some photographs of "Woodland Spirits" that he took, and that are at least mildly entertaining, including one of a guy "coming into rapport" with a tree.) 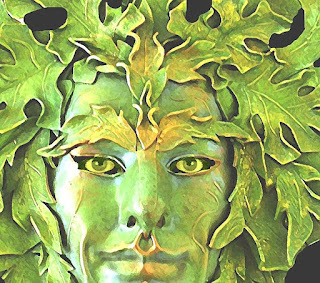 Well, to a skeptic's ear, all of this sounds mighty convenient.  It's akin to a ghost hunter saying, "No -- the ghostly image wasn't just a smudge on the camera lens; the ghost created a smudge on your camera lens in order to leave his image on the photograph."  What this does, of course, is to remove photographic evidence from the realm of the even potentially falsifiable -- any alternate explanations simply show that the denizens of the Spirit World can manipulate their surroundings, your mind, and the camera or recording equipment.

The whole thing puts me in mind of China Miéville's amazing (and terrifying) short story "Details," in which a woman admits that cracks in sidewalks and stains on walls and patterns in carpet that happen to resemble faces are just random and meaningless -- but at the same time, they are monsters.  Here's how the main character, the enigmatic Mrs. Miller, describes it:

"For most people, it's just chance, isn't it?" Mrs Miller said. "What shapes they see in a tangle of wire.  There's a thousand pictures there, and when you look, some of them just appear.  But now... the thing in the lines chooses the pictures for me. It can thrust itself forward. It makes me see it. It's found its way through."

It does bear keeping in mind, though, that however wonderful Miéville's story is, you will find it on the "Fiction" aisle in the bookstore. For a reason.

Of course, it's not like any hardcore skeptic considers photographic evidence all that reliable in the first place.  Besides pareidolia and simple camera malfunctions, programs like Photoshop have made convincing fakes too easy to produce.  This is why scientists demand hard evidence when people make outlandish claims -- show me, in a controlled setting, that what you are saying is true.  If you think there's a troll in the woods, let's see him show up in front of reliable witnesses.  Let's have a sample of troll hair on which to perform DNA analysis, or a troll bone to study in the lab.  If you say a house is haunted by a "spirit," design me a Spirit-o-Meter that can detect the "energy field" that you people always blather on about -- don't just tell me that you sensed a Great Disturbance in the Force, and if I didn't, it's just too bad that I don't have your level of psychic sensitivity.  Also, for cryin' in the sink, don't tell me that my "disbelief is getting in the way," which is another accusation I've had leveled at me.  Honestly, you'd think that, far from being discouraged by my disbelief, a ghost would want to appear in front of skeptics like myself, just for the fun of watching us piss our pants in abject terror.  ("I do believe in spooks, I do believe in spooks, I do believe, I do believe...")

In any case, the article on Crystal Life gives us yet another example of how the worlds of science and the paranormal define the word "evidence" rather differently.  The two views, I think, are probably irreconcilable.  So I'll end here, on that rather pessimistic note, not only because I've reached the end of my post for the day, but also because I just spilled a little bit of coffee on my desk, and I want to wipe it up before the Coffee Fairy fashions it into a scary-looking face.