One of the most maddening things about this administration -- and there are many options to choose from -- is the insidious way they're hamstringing scientific research.

It's not just science denial.  That's bad enough.  Claiming that climate change, evolution, and the documented harmful effects of pollution are false has led to dreadful policy choices and (in the case of ecological malfeasance) put innocent lives at risk.

But they've found a sneakier way to deflect people's focus on reality; simply pull the plug on the projects that keep track of it.

This was done, to little fanfare and nearly zero coverage by the press, last week, to NASA's Carbon Monitoring System.  The project, which cost an estimated ten million dollars a year, not only kept track of carbon dioxide levels in the atmosphere, but studied sources and sinks for carbon worldwide (including methane, which is an increasing concern from thawing permafrost, and which has a higher greenhouse effect than carbon dioxide does).

So the powers that be have moved past arguing that the models are wrong, or the data flawed; they've simply stopped us from gathering the data in the first place. 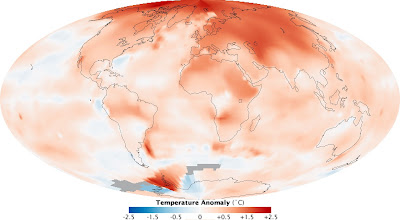 Daniel Jacob, an atmospheric chemist at Harvard University, called this an "ironic" time to shut down the system.  There are two new, and more sensitive, carbon monitoring devices scheduled for launch -- one this year (to be mounted on the International Space Station), and one next (the Geostationary Carbon Cycle Observatory), and these will now be tabled.  So Jacob finds it ironic because the funding is cut just before we added some tools to our kit that would allow far more refined measurements of the carbon levels in the atmosphere.  Me, I don't think it's ironic at all, I think it's pure cunning.  Stop the scientists from bolstering the data and their atmospheric models.  Prevent them from producing integrated theories that might make predictions leading to potential strategies for dealing with climate change.  It's like firing all the watchmen, and then acting surprised when your store gets robbed.

Or, as Paul Voosen put it, writing for Science:  "You can't manage what you don't measure."

There's no doubt about where this is all coming from; the pro-corporate, pro-fossil-fuel leanings of the current administration have never been in doubt.  Along the way, they've made sure that the voices of industry (Scott Pruitt, Ryan Zinke, Rick Perry, Doug Domenech) are appointed to influential positions, and the voices of science are ignored, defunded, shut down, silenced, and harassed.  If you doubt the last-mentioned, look into the track record of Texas Representative Lamar Smith -- who, fortunately, is retiring this year, but who has spent damn near his entire career fostering doubt about climate change and other environmental issues, and making the lives miserable of any scientist who dares to claim the opposite.  Oh, he gives lip service to caring; earlier this year, Smith said he'd be fine addressing carbon dioxide levels and climate change -- but only if we do it by replacing fossil fuels with fusion technology.

Which doesn't exist yet, and which may not even be possible on a sufficient scale to provide the nation's energy needs.  And we'd only find out if it was feasible through scientific research, which Smith and his cronies have systematically shut down.

So the fossil fuel CEOs make money hand over fist, and then they buy the votes of politicians like Smith who are more concerned with their bank accounts than with the long-term habitability of the Earth.  And the scientists -- who, of all of us, have the most reason for sounding the alarm, and evidence to back them up -- are being sidelined.

All of this leaves me feeling helpless.  I know that optimists keep talking about a "Blue Wave" that's going to come in November and sweep away all of the elected officials who have become nothing more than Trump's professional ass-kissers.  Me, I'm not quite so sanguine.  Not only do we have a powerful, deeply entrenched corporate/industrial superstructure that is tickled pink by the environmental deregulation, pro-business tax legislation, and defunding of research, there's the dictatorship-style State-Sponsored Media that Fox News has become, presenting only the cheerful party line coming from the White House and ignoring anything that could be considered a criticism of the Dear Leader's agenda.  So you've got the rich and powerful pulling the strings, and a deluded and ignorant slice of Americans never hearing what the actual effects are -- and voting the same lobby-bought politicians back into power over and over and over.

I keep hoping that people will wake up, but I'm reminded of what one of my Environmental Science students wrote, many years ago, and which seems a fitting, if depressing, way to conclude: "It'd be nice if humans based their decisions on science, but that's not what most people do.  In this case, it's going to take something really horrible to bring people to their senses -- not just one drought, one storm, one killer heat wave.  People are so sunk in short-term expediency and long-term self-delusion that it's going to take a global-scale catastrophe for them to frown, and say, 'Wait.  Maybe this was a bad idea.'  And not only does that mean that it'll come at the cost of millions of lives, it may not happen until it's too late to do anything to stop it."