Yesterday I ran into a claim that, even by comparison with most alt-med nonsense, is way out there.  The gist of it is that you can fix all your physical ailments if you just stop drinking water with deuterium in it.

Deuterium, as I probably don't need to explain, is "heavy hydrogen" -- hydrogen atoms whose nucleus contains a proton and a neutron (rather than only a proton, as in ordinary hydrogen).  Heavy water has a few different physical and chemical properties from ordinary water -- such as (unsurprisingly) being 10.6% more dense and being more viscous.  It has an ability to slow high-energy neutrons down without absorbing them, making heavy water important in nuclear fission reactors.  Additionally, deuterium forms stronger bonds to carbon and oxygen than ordinary hydrogen. 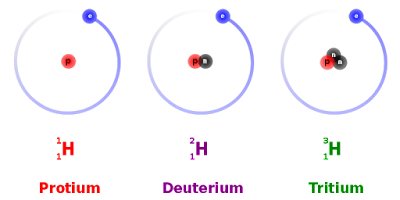 The "Beginner's Guide to Deuterium and Health," however, has some information that would be seriously scary if it weren't for the fact that nearly all of it wrong.  It starts with a definition of "deuterium," which is correct, and is honestly the last thing on the entire webpage that is.  You're put on notice about the veracity of the site in the first paragraph, wherein we find that the details of how awful deuterium is for you is only accessible to "those with an understanding of advanced bio-chemistry, bio-physics and quantum health."

Or, perhaps, does it refer to someone who is both sick and well at the same time until they go to a doctor, at which point the Alt-Med Wave Function collapses, and they become one or the other?

Then we find out that our health depends on how fast our mitochondria are spinning.  No lie, here's the relevant passage:

What this is referring to, insofar as I can understand it, is the electron transport chain, wherein electrons in your mitochondria give up some of their energy through a series of oxidation/reduction reactions, and that energy is used to shuttle hydrogen ions across the mitochondrial membrane.  The ultimate result is the generation of ATP, a crucial energy storage molecule.

The amusing part is that the rate of this reaction is controlled incredibly tightly.  You need about seventy million ATP molecules per second, per cell, and you use them equally quickly -- ATP doesn't store well.  If your rate of production went up without your rate of consumption going up, you won't be healthier; the ATP will spontaneously break down, liberating the energy as heat, and you'll spontaneously burst into flame.

So the site is right to the extent that if this happened, worrying about illness and aging would be down near the bottom of your Priorities List.

Anyhow, what we're told is that deuterium kind of gums up the works, making the "spinning head" run more slowly, giving us chronic diseases.  What kind of chronic diseases is never specified, because apparently they're all caused by the same thing, whether you're talking about arthritis or high blood pressure.

The pièce de resistance, however, is when the website tells us what to do about all this.  In order to avoid this bad stuff, the solution is simple: we have to start drinking water with the deuterium removed.

But how do you do this?

Easy.  You take ordinary tap water, and freeze it.

If you put water in the freezer, they say, the heavy water will freeze first.  So you wait until a crust of ice forms, and either chip off and remove that, or else pour off the still-liquid part of the water.  Do it again and again, and eventually you'll have healthful "deuterium-depleted" water.

It works even better, they say, if you start with water "from glacial regions," because it's already been de-deuterium-ized naturally.

I know that the people who construct nuclear reactors would be glad to hear this.  The current method of producing heavy water for industry is called the Girdler sulfide process, which produces one ton of heavy water for every 340,000 tons of water you start with.  This means the stuff's expensive -- one place I looked is charging $680 per liter.  If all they had to do is freeze regular water and pull off the ice, it'd be quite a cost savings.

As with many wacky claims, there's a (small) grain of truth to this stuff.  Heavy water does have a higher freezing point than ordinary water (3.7 C as compared to 0 C).  It's also toxic, but only if you replace 25% of your body's water content with heavy water -- an expensive proposition given its cost.  (One source said, "accidental or intentional poisoning with heavy water is unlikely to the point of practical disregard.  Poisoning would require that the victim ingest large amounts of heavy water without significant normal water intake for many days to produce any noticeable toxic effects.")

What about our consumption of heavy water from contamination of ordinary water?  Well, since in virtually all tested water sources, the concentration of heavy water is one part in 3,200, I don't think you have much to worry about.  But if it amuses you to partly freeze your drinking water and throw away the icy part, by all means have at it,.

Oh, and the website also says that once you "flush out the deuterium" from your body, your "energy level will increase, along with your magnetic field."  Which sounds potentially dangerous to me.  I would hate to have just made myself all healthy and deuterium-free, then I walk into a Williams-Sonoma and my magnetic field starts attracting metal kitchen implements, and I get impaled in the forehead by a meat cleaver or something.

So there you have it.  How to go through a lot of folderol to remove something from your water that (1) is there in vanishingly small amounts, and (2) has no toxic effects at that dosage.  Me, I'm more inclined to eat right and exercise regularly, but maybe I'm only saying that because the deuterium has gummed up the "spinning heads" in my brain's mitochondria and I'm not thinking straight.  You can see how that could happen.