In on the secret

In yesterday's post, we considered how a feeling of being in power can dull people's capacity for empathy and compassion.  Today, we're going to look at how a desperation to feel unique, smart, and "in the know" can lead people to believe in baseless conspiracy theories.

Which once again brings us to Donald Trump.

The day before yesterday, Trump launched into new and unexplored vistas of paranoia by claiming that Robert Mueller's investigation of the Trump campaign's alleged collusion with Russian agents is itself going to meddle in the midterm elections this fall -- in order to favor Democrats.

Let's start with the fact that it'd be pretty odd if Mueller did this, because he's a registered Republican.  Not that Trump accepts this, either; every other tweet claims that anyone connected to the Russia investigation must be a Democrat, and apparently, he (through his mouthpieces over at Fox News) have convinced his followers that the whole thing is just a big Democratic conspiracy.  If you don't believe me, here's the exact quote:


The 13 Angry Democrats (plus people who worked 8 years for Obama) working on the rigged Russia Witch Hunt, will be MEDDLING with the mid-term elections, especially now that Republicans (stay tough!) are taking the lead in Polls. There was no Collusion, except by the Democrats!

It's an open question whether Trump himself believes this, or if he's manipulating his fan base in a calculated fashion so that he and his cronies can stay in power.  What's certain, though, is that his supporters believe it.  Never mind that there's no evidence; never mind that the facts themselves argue against its being true.

It's like he's Jesus, you know?  The new bumper sticker should say, "Trump said it, I believe it, and that settles it."

Which I find pretty mystifying.  I know there's some sunk-cost fallacy going on here; these people have already put an inordinate amount of time and energy into getting this guy elected, so to admit now that it's all been a big mistake is a bridge too far.  Easier to believe that Dear Leader is being targeted by a shadowy Deep State cohort of evil doers.

But some recent research has found that there are two other reasons people fall for conspiracies.  And what they suggest is a little frightening.

A study by Daniel Sullivan, Mark J. Landau, and Zachary K. Rothschild in the Journal of Personality and Social Psychology found that people's inclination to believe in conspiracies correlates negatively with their sense of being in control of their circumstances.  People who think that their lives are controlled by unpredictable and chaotic events -- the weather, natural disasters, random crime, arbitrary decisions by leaders -- are more likely to believe that there are evil conspiracies at work.  Which makes sense; if you feel like you're in control of your destiny, it makes less sense that there are Puppet Masters pulling your strings.

But there's more to it.  According to a recent study by Roland Imhoff and Pia Karoline Lamberty of the Johannes Gutenberg Universität Mainz that appeared in the European Journal of Social Psychology, a belief in conspiracy theories also correlates strongly with a need to feel unique.  The authors write:


Adding to the growing literature on the antecedents of conspiracy beliefs, this paper argues that a small part in motivating the endorsement of such seemingly irrational beliefs is the desire to stick out from the crowd, the need for uniqueness.  Across three studies, we establish a modest but robust association between the self‐attributed need for uniqueness and a general conspirational mindset (conspiracy mentality) as well as the endorsement of specific conspiracy beliefs.  Following up on previous findings that people high in need for uniqueness resist majority and yield to minority influence, [our research] experimentally shows that a fictitious conspiracy theory received more support by people high in conspiracy mentality when this theory was said to be supported by only a minority (vs. majority) of survey respondents.  Together, these findings support the notion that conspiracy beliefs can be adopted as a means to attain a sense of uniqueness.

Imhoff, writing about his and Lamberty's research in the online magazine Quartz, says:


Belief in conspiracies can serve to set oneself apart from the ignorant masses—a self-serving boast about one’s exclusive knowledge.  Adherence to conspiracy theory might not always be the result of some perceived lack of control, but rather a deep-seated need for uniqueness...  [Consider] the often vocal, evangelising conduct of actual conspiracy theorists, their claims to superior insight, and their degradation of non-believers as ignorant sheep (German conspiracy theorists label the uninformed masses Schlafschaf, literally ‘sleepsheep’).

So the reason people who fall for Donald Trump's wild conspiratorial claims, and those of other big names in the conspiracy theory world (such as Alex Jones and David Icke), is largely (1) that they feel powerless in their own lives, so someone must be causing the bad shit that happens, and (2) that they have a deep desire to be one of the ones who has it all figured out. 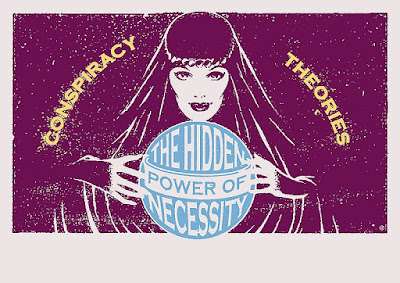 Whether Trump believes his own lunatic tweets, then, turns out to be irrelevant.  In the minds of his followers, it creates a rather horrifying trifecta of irrationality -- revering a figure who has become a stand-in for God himself, feeling like there are powerful forces responsible for all of the negative things in the world (including the attacks on Dear Leader), and a desperation not to be duped.  And the irony is, the direct result is that they are being duped, by a guy who was in over his head from day one and has made one blitheringly idiotic move after another, all the while claiming that any negative reaction is "Fake News" and any bad outcomes are because his Grand Plans are being subverted by either the Deep State or the Democrats, depending on what day it is.

The worst part is I don't know what the hell you can do about this.  As Imhoff put it: "Seeing evil plots at play behind virtually any world event is not only an effort to make sense of the world.  It can also be gratifying in and of itself: It grants one the allure of exclusive knowledge that sets one apart from the sleeping sheep.