There have been some interesting, and all too predictable, responses to a study that appeared in the Archives of Sexual Behavior this week.

The paper, written by Arielle Kuperberg and Alicia M. Walker, is entitled "Heterosexual College Students Who Hookup With Same-Sex Partners," and investigates the skew that can exist between a person's behavior and their self-identification.  Specifically, Kuperberg and Walker sifted through data from 24,000 American college students, asking questions about hookups, long-term relationships, and which demographics they fell into.

The results were unsurprising, at least to me.  Only looking at the individuals' most recent hookup, they found that 12% of the male-male experiences, and 25% of the female-female experiences, were reported by self-labeled heterosexuals.

In an interview with PsyPost, study co-author Kuperberg explained that the (also self-reported) reasons for these hookups by students who consider themselves straight varied all over the map.  Some said they were curious, or experimenting; others, that found themselves in the situation in the heat of the moment (as it were) but had no inclination to repeat the experience.  Most fascinating -- and saddest -- were the 8% of the students who said they were heterosexual but had participated in a same-sex experience, and who described themselves as highly religious and such behavior immoral and sinful.

What is a little disheartening are the responses I saw on social media to this study, a link to which I've now seen on Reddit, Facebook, and Twitter.  Some of the comments were positive, but a great many were like the following:

(Astroturfing, by the way, is "the practice of masking the sponsors of a message or organization (e.g., political, advertising, religious or public relations) to make it appear as though it originates from and is supported by a grassroots participant(s)."  I'd never heard the term, and had to look it up, so I thought I'd save you the trouble if you also hadn't run across it.)

What baffles me about all of this, and in fact what has baffled me for years, is why anyone cares who's having sex with whom.  As long as there's consent, and no breaking of trust with a significant other, how is any of it immoral?  (And, in the case of opposite-sex hookups, measures are taken to prevent conception.)  Jonathan Haidt, who has extensively studied morality, includes "purity/sanctity" as one of his five moral pillars.  But it seems to me that this one is different from the other four (care, fairness/justice, in-group loyalty, and respect for authority) in that even when it's broken, no one gets hurt. 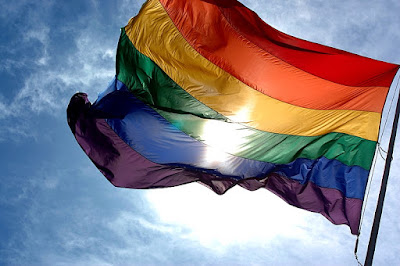 Again, let me emphasize that I'm not talking about situations of cheating.  That's not just about the sex, it's also about disloyalty, dishonesty, and lack of respect for a commitment.  But setting that aside, how can two guys trying it out be "immoral," or "deviant," or a move toward "destroying our culture?"

After all, they're not insisting that you have a same-sex hookup.  They're just saying they wanted to.

And as far as the person who objected to all the categories, let me say something I've said before.  Gender and sexual orientation are not binary.  They never have been.  Gender is not just about the physical anatomy -- it also has to do with the chromosomal makeup (XX versus XY) and the fundamental wiring of the brain.  As far as orientation goes, it was known all the way back to the Kinsey studies that there are plenty of people who are not exclusively heterosexual or homosexual in their desires -- irrespective of whether they ever act on them, or how they choose to label themselves.

So the idea of same-sex hookups between people who consider themselves mostly hetero might make you feel squinky, but the fact that you don't like reality deserves only a shrug and a comment of "tough shit."  As I've also said before, the universe is under no particular compulsion to behave in a way that makes you comfortable or conforms to your biases.

I'll end with a quote from study co-author Arielle Kuperberg:

Our research shows that sexual identity and sexual behavior do not always match up.  Same-sex behavior may not necessarily have implications for sexual orientation; not everybody who has hooked up with a same-sex partner but identifies as heterosexual is "secretly gay" or "on the down low."

Some may be engaging in experimentation because that’s now an expected part of college, and they are curious about same-sex sexuality.  Others may be experiencing conflicts between their sexual orientation and their religious beliefs, which can cause psychological distress.  Although the behavior is the same, motivations for it are diverse, which is important to take into account in future research and in clinical settings.