I like to think of myself as basically an optimistic person, and someone who looks for the best in my fellow humans.  But there are times that I think that a gigantic meteor strike might, all things considered, be the best option at this point.

Those times usually occur when people persist in a behavior that is known, for absolute certain, to be self-destructive.  And surprisingly enough, I'm not talking about climate change here, and our determination to keep burning fossil fuels despite the near-universal consensus amongst climatologists that this practice is drastically altering the Earth's climate.  What I'm referring to is two stories that both broke day before yesterday, and that leave me shaking my head and feeling like whatever happens to our species, we kind of deserve it.

The first, and more local, example of this phenomenon was described in an article in NPR Online, the title of which sums up the problem succinctly: "Levees Make Mississippi River Floods Worse, But We Keep Building Them."  The article, written by Rebecca Hersher, describes the ongoing catastrophe along the Mississippi River, wherein every single year there are destructive, often deadly, floods.

Here's a capsule summary of the problem.

Before the 20th century, the Mississippi had a habit shared by many large rivers; overflowing its banks during the rainy season.  This phenomenon had a couple of effects.  First, it brought the silt picked up along the way out of the river basin, depositing it on land.  Second, it meant that regular, minor floods -- the sort of thing one can prepare for and cope with -- were kind of a way of life.  (Why, for example, my uncle's fishing cabin in Henderson, Louisiana was built on stilts.)

But when the population started both to grow and urbanize, these floods were "mitigated" -- by installing a system of levees and spillways to "tame the river."  Mostly constructed in the 1930s and 1940s by the Army Corps of Engineers, the (well-meant) attempt to stop people from being flooded out every year had two unexpected effects.

Rising river + sinking land = a need for bigger levees.  So the levees were raised, making the problem worse -- and so on and so forth.  I still vividly remember being in New Orleans and walking along a footpath at the base of a levee along the Mississippi -- and looking up to see the top of a shrimp boat going past, about thirty feet above my head. 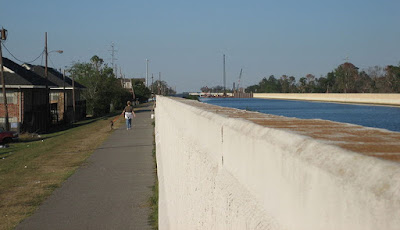 The 17th Street Canal in Metairie, Louisiana [Image licensed under the Creative Commons No machine-readable author provided. Infrogmation assumed (based on copyright claims)., MetOutletCanalDogwalkerBreechBkgrd, CC BY 2.5]

The second unexpected effect follows directly from the first.  If you build higher levees, the water level rises, so when the levees break, you don't have a minor flood, you have a catastrophic one.  This, of course, is what happened in New Orleans in 2005 during Hurricane Katrina, but it's inevitable that it'll happen again in the near future.

The kicker?  We've known about this problem for ages.  In 1989 John McPhee wrote an incredible book on the topic, called The Control of Nature, in which he laid out the problem clearly.  And what have we done differently since then?

Nada.  Build more levees.  Pretend we know what we're doing, and that nature won't ultimately have the last word.

The other example of humans doing idiotic self-destructive stuff revolves around something I always mention in my biology classes as the time our species did something right; the 1989 Montreal Protocol that banned the production or use of chlorofluorocarbons, a class of chemicals used as coolants and propellants that were thought to be harmless but turned out to destroy the atmosphere's protective ozone layer.  Almost all the nations on Earth signed on -- surely one of the only times in humanity's history where damn near everyone has agreed on something.

Or so we thought.  Since 2012, there's been a sudden and mysterious uptick in the amount of CFCs in the atmosphere -- up, at one estimate, by 25%.  As of the time of this writing, no one's quite sure where it's coming from.  Up until now, the CFC levels have been gradually falling (and ozone hole gradually diminishing) as the CFCs from before 1989 have broken down -- but it appears that we're not done with this problem yet.

"It is not clear why any country would want to start to produce, and inadvertently release, CFC-11, when cost-effective substitutes have been available for a long while," said NASA scientist Robert Watson, who led the studies thirty years ago that led to CFCs being banned.  "It is therefore imperative that this finding be discussed at the next Ministerial meeting of Governments given recovery of the ozone layer is dependent on all countries complying with the Montreal Protocol (and its adjustments and amendments) with emissions globally dropping to zero."

Durwood Zaelke, founder of the Institute for Governance and Sustainable Development and an expert on the Montreal Protocol, was more unequivocal still.  "Somebody's cheating.  There’s some slight possibility there’s an unintentional release, but… they make it clear there’s strong evidence this is actually being produced...  This treaty cannot afford not to follow its tradition and keep its compliance record...  They’re going to find the culprits.  This insults everybody who’s worked on this for the last 30 years.  That’s a tough group of people."

So at least we have some folks who are on the case.  What kind of power to compel they will turn out to have, once the culprits are identified, remains to be seen.  And here in the United States, we've seen in the past year a weakening of damn near every environmental regulation we have, in favor of corporate profit and short-term expediency.  So how much help our government will be is questionable.

I'm holding out some hope that at least by publicizing these issues, people are beginning to wise up.  However, our inaction on climate change -- a phenomenon we've known about since the 1890s -- doesn't bode well.  Mostly what has happened is that the people who are brave enough to sound the warning have turned into Cassandras -- prophets who are cursed to be correct, but no one believes them.

As for me, I'm trying to maintain my optimism, but after reading these two articles, right now mostly what I'm doing is scanning the skies looking for the incoming meteor.