I participate in a rather amusing motivational technique to keep me running regularly.  It's called "virtual racing" (the particular version of this I play is over at the site YesFit), and the idea is that you choose a location where you'd like to be running, then log your miles however you prefer -- running, walking, cycling, swimming, whatever -- and the site shows you where you are on a map, sends you pictures from Google StreetView, and every once in a while will give you a clickable link to find out more about the place you're "visiting."  Then, when you finish the race, you get a prize -- a medal or a t-shirt.

I know it's a little silly, but I love seeing my little place marker move across the map, and it's great fun to see pictures of where my avatar is.  Well, usually it is -- my most recent race was along the infamous Area 51 in Nevada, and to say the scenery is monotonous is like saying that the terrain around Mount Everest is "a little hilly."

Even so, I completed the race (a total of 97.7 miles), and yesterday, I got my reward t-shirt, with a silhouette of an alien saying, "Thanks For Believing In Me."  And in a nice little synchronicity, I had shortly after I opened the package, I found a link over at Mysterious Universe claiming that Google Earth caught photographs of the bombing range at Groom Lake (part of Area 51) showing bomb craters...

... with tentacles coming out of them.

The problem with Mysterious Universe is that I can never tell when they're kidding.  Some of their authors, notably Nick Redfern and Brent Swancer, seem like True Believers.  Others, like Paul Seaburn, tend to take a more skeptical view of things.  The jury's still out about the one who wrote the article about the tentacles, Sequoyah Kennedy, because he says that the tentacles are signs that the Lovecraftian Elder Gods are returning to Earth.

Without further ado, here's one of the photographs: 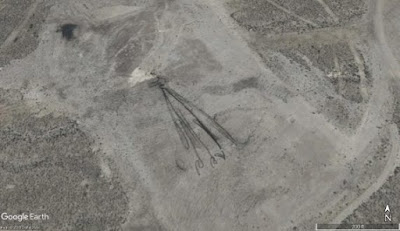 And here's a bit of what Kennedy has to say:


There’s a weird almost-symmetry to a lot of these “tentacles,” and it definitely has an organic sort of shape.  I wonder if it’s slightly differently programmed ballistics tests leaving char marks on the ground, or perhaps captured mid-flight, but I’m completely unqualified to make any judgments on that so I’m sticking with what I know—Elder Gods.

Which seems like a solid logical chain to me.  If you can rule out char marks from ballistic tests, any weird thing captured on Google Earth must be Great Cthulhu returning to subjugate humanity.

However, he does seem to realize that he's on shaky ground:


There appears to be a small hole with long eldritch tendrils reaching out of it, like tree roots or black mycelium.  It’s weird.  It could be absolutely anything, but it’s weird.

Which puts me in mind of the wonderful quote from Carl Sagan's Cosmos:

Ironically, one of Lovecraft's best stories, "In the Walls of Eryx," is about an Earth man on Venus, slogging around in a swamp, while fighting -- you guessed it -- super-intelligent dinosaurs.

Myself, I doubt the tentacles in Area 51 have anything to do with Cthulhu, Nyarlathotep, Tsathoggua, and the rest of the gang.  Nor, as one of my friends suggested, does the sinkhole that opened up last week in front of the White House, despite the fact that casting Donald Trump in the role of an evil, depraved Elder God actually has some appeal.  (Maybe he'd be Yuck-Sothoth, or something.)

So chances are, this is another one of those things that has a completely ordinary explanation, even if (because it's Area 51, after all) we never find out what it is.  I'm certainly not going over there to find out; besides it being the most boring terrain in the world, there are signs all over the place saying "KEEP OUT: THE USE OF DEADLY FORCE IS AUTHORIZED," which is a little off-putting.  Now y'all will have to excuse me, because I'm going to go for a run.  I'm currently ten miles into the Yeti Trail in Nepal, and the t-shirt for this one is wicked cool.