Sometimes I run across alternative health therapies that are so freakin' weird I suspect, at least for a time, that the alt-med crowd is trolling us skeptics.  The sad truth is that when I look a little harder, I find that they're almost always completely serious.  And that includes the one that I just found out about yesterday, wherein just about anything that ails you can be cured by...

... blowing ozone up your ass.

Despite the disclaimer in the first paragraph, I feel obliged to reiterate that I'm not making this up.  "Ozone therapy" is a big deal; I've found that it's recommended for sterilizing wounds, treating SARS, AIDS, Ebola (for a third time, I'm not joking), Crohn's disease, rheumatoid arthritis, and various cancers.  Some treatments (as in the wound sterilization) merely wafts ozone over the affected area.  Others involve treatment with "ozonated olive oil," the aforementioned treatment of running a tube up your ass and blowing ozone therein, and (in one case) injecting a bubble of ozone directly into your vein.

The last-mentioned made my jaw drop.  A bubble in your blood vessels is known as an "air embolism," and can kill you.  It doesn't matter what the bubble is composed of.  If it migrates around until it gets into one of the arteries in the brain, you'll have a stroke.

Which means you now have an additional concern beyond a wound, SARS, AIDS, or what-have-you.

But the blow-it-up-your-ass method (known to the alt-med community by the more genteel name of "rectal insufflation") seems to be the most popular, which raises a question; how did anyone ever think of doing this?  I can't imagine being a medical researcher and thinking, "Wow, this ear infection could easily be cured if I just pump a toxic gas up the patient's butt."  Because any way you slice it, ozone is toxic.  It's O3 (normal oxygen is O2) and unsurprisingly is an unstable, highly reactive strong oxidizer. It does kill bacteria -- thus the suggestion that it'd be a good wound sterilizer -- but the problem is, the same properties that make it toxic to bacteria make it toxic to healthy cells.  Hell, single malt scotch kills bacteria, and I don't hear anyone proposing single malt scotch therapy.  (Although after doing this research, I'm seriously considering it.)

In fact, ozone is produced by electrical and gas-powered equipment (including car engines), and is considered a pollutant by the EPA.  According to the fact sheet about ozone, it "can trigger a variety of health problems including chest pain, coughing, throat irritation, and airway inflammation.  It also can reduce lung function and harm lung tissue.  Ozone can worsen bronchitis, emphysema, and asthma."

So positive health effects?  Not so much. 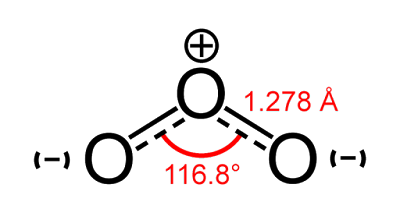 An ozone molecule [Image is in the Public Domain]

After spending over an hour searching, I only found one legitimate-sounding paper that took the idea of rectal insufflation seriously.  Titled "The Effect of Rectal Ozone on the Portal Vein Oxygenation and Pharmacokinetics of Propranolol in Liver Cirrhosis (A Preliminary Human Study)" by Saad Zaky, Ehab Ahmad Fouad, and Hassan Ibrahim Mohamad Kotb of Assiut University in Egypt.  The study was published back in 2011, and the authors kind of disappeared from the world of research publication afterwards, which says something.  Also, I notice that the one major effect they mention is that in their fifteen patients (yes, the sample size was that small), they saw an increase in oxygenation in the hepatic portal vein.

Oh, did I mention that what they blew up their patients' asses was 40% ozone -- and 60% oxygen?  Funny how that might increase your blood's oxygen saturation.

Of course there were plenty of sites advertising ozone machines and ozone therapy clinics and equipment so you can "insufflate" your own ass.  But it's unsurprising those weren't exactly peer-reviewed research, given that these people are making a bundle from the desperate and the gullible.

On the other hand, the sites explaining the complete lack of evidence that this has any therapeutic effect were numerous and vitriolic.  Here's what Andy Lewis, over at The Quackometer, has to say:


O2 is what we breathe and absorb in our lungs for transport to our cells.  O3 is a highly oxidising form of oxygen that has very harmful effects on our respiratory systems.  As such, if you squirt ozone on cancer cells on a dish they will die – but then so will all cells.  Cancer therapies work, in the main, by exploiting poisons that kill cancer cells faster than non-cancer cells.  This is pretty hard in practice as cancer cells are very, very similar to normal cells.  The mere fact that a poison kills cancer cells in a test tube does not mean that it can form a therapy...  Ozone has been proclaimed as a miraculous cure for over a hundred years.  There is yet to be any meaningful evidence that it can help cancer patients.  The available good evidence so far suggests that harms will outweigh any potential benefits.

Then there's Paula Kurtzweil, at Quackwatch, who tells the story of a couple in Florida who were fined and sentenced to prison terms for claiming people with AIDS and cancer could be cured by their magic ozone machines:


Proponents of medical ozone generators believe ozone can kill viruses and bacteria in the body. While ozone is used as a germicide in the cleaning of manufacturing equipment, FDA is not aware of any scientific data that supports the safety or effectiveness of ozone generators for treating medical conditions. In fact, the agency believes that at the levels needed to work effectively as a germicide, ozone could be detrimental to human health.

"These devices keep popping up," says Bob Gatling, a biomedical engineer and director of the program operations staff in FDA's Center for Devices and Radiological Health.  "We always tell their makers, 'Show us some data,' but no one ever pursues it."

FDA's knowledge of [alternative medicine practitioner Kenneth] Thiefault's involvement in ozone generators dates to at least 1990, when Thiefault was interviewed during an FDA criminal investigation of one of Thiefault's associates.  This associate was later prosecuted and imprisoned for, among other things, manufacturing and selling ozone generators for treating medical conditions.  After release from prison, he returned to making and distributing ozone generators for treating medical conditions but fled the country before he could be prosecuted again.

Also from Quackwatch, here's Dr. Saul Green's take on it:


In 1991, Wells et al. reported that gaseous ozone inactivated cell-free HIV-l in cell-free culture medium.  Using escalating concentrations of ozone, they showed that a l200 ppm dose delivered into the solution for two hours, reduced the number of infectious viruses... and detectable virions about 85%.  However, there was also a significant reduction in infectivity after virus exposure to nitrogen.  Other factors influencing the rate and degree of inactivation of HIV-I by ozone were protein and plasma components in the culture medium.  (HIV is known to be inactivated by a host of relatively inactive substances.)  While ozone might be useful in rendering commercial blood products free of infectious organisms, more extensive analyses of the HIV-I life cycle was needed before ozone's usefulness as an in vivo anti-retroviral agent could be defined.  Poiesz, Wells' co-author, wrote, "No further in vitro work has been done and to my knowledge no in vivo work has been done."

The alt-med monitoring site What's the Harm? lists thirteen people who sought out ozone therapy -- one of them paid $23,000 for it -- instead of legitimate treatment modalities, and found out that it is definitely not a miracle cure.

So anyhow.  If you have a chronic disease, and (for some reason) decide that the best treatment would be to insufflate your rectum with toxic gas, I would exhort you to reconsider.  There is no reliable peer-reviewed research that it provides any benefits whatsoever, and (cf. the word "toxic" in the previous sentence) can kill healthy tissue.  Now, y'all will have to excuse me, because I think I need some single malt scotch therapy after all.