Why do we tolerate abject stupidity in our leaders?

I'm asking this not, surprisingly, because of Donald Trump, but because of Representative Mo Brooks of Alabama, a member of the House Committee on Space, Science, and Technology,who claims -- and I am not making this up -- that sea level rise is not being caused by climate change, but by rocks falling into the ocean.

At the time of this writing, I have been emailed this story five times by loyal readers of Skeptophilia, usually accompanied by the words, "What the fuck is wrong with these people?"  In case you are disinclined to believe that someone can be that big an idiot, here's the actual quote:


What about the White Cliffs of Dover … [and] California, where you have the waves crashing against the shorelines, and time and time again you have the cliffs crashing into the sea?  All of that displaces water which forces it to rise, does it not?  Every single year that we’re on Earth, you have huge tons of silt deposited by the Mississippi River, by the Amazon River, by the Nile, by every major river system — and for that matter, creek, all the way down to the smallest systems.  Every time you have that soil or rock or whatever it is that is deposited into the seas, that forces the sea levels to rise, because now you have less space in those oceans, because the bottom is moving up. You put it all together, erosion is the primary cause of sea level rise in the history of our planet and these people who say to the contrary may know something about climate but they don't know squat about geology...

It didn't take long for a story to appear in the Washington Post estimating the size of the blob of rock you'd have to drop into the ocean to see what we're seeing (a 3.3 millimeter rise per year).  The answer: 1.19 trillion cubic meters, equivalent to a sphere eight miles in diameter.

Put another way, this would be like scraping the top five inches of dirt from the entire United States, rolling it into a ball, and dropping it into the ocean.

Every year.  In case I haven't made that point clear. 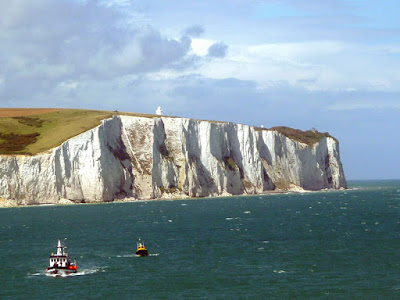 Brooks went on to say that the polar pack ice is actually increasing, and the tired old story about how climatologists in the 1980s said there'd be "global cooling," and that didn't happen:


What I'm trying to establish is that a lot of these climatologists have no idea what they're really talking about, and it's because we have not had a long enough period time with exact scientific measurement to know what the climate's going to be like fifty years from now or a hundred years from now.   The bottom line is nobody is smart enough to know with the evidence we have and the relatively small time frame we have - fifty years in the history of the planet.  That's just not enough information with which to make accurate predictions.

Of course, we do have more information than that; we have accurate proxy records going back thousands of years, and some pretty shrewd guesses going back millions.  The link between carbon dioxide and global temperature, and predictions of what would happen if we kept burning all the fossil fuels we could get our hands on, go all the way back to Svante Arrhenius in 1896.  At least Brooks has a clear understanding of how someone could be this willfully stupid, ignoring mountains of evidence and the arguments of climatologists (i.e., the people who actually understand what's going on, despite Brooks's pronouncement that they "have no idea what they're really talking about"):


Money.  Money to invest in a certain kind of resources where you might have a financial interest.  There's also politics as you're trying to cobble together the votes to win an election, that's probably part of it, too.

Which, presumably, is how imbeciles like Mo Brooks "cobble together the votes to win an election."

The cure, of course, is an educated electorate, but with the disinformation campaign going on right now, there's been so much distrust of the experts sown in the minds of laypeople that you can tell them damn near anything you want.  The first thing that the talking heads and corporate lobbyists do is to teach people to doubt the facts -- to claim that the data itself is wrong, skewed, or deliberately falsified.  The Earth's not warming, the sea's not rising, storms are not getting stronger.  Oh, and even if the Earth is warming up, all that's going to do is make the cold parts of the world nice and balmy.

Don't worry.  We're not doing anything dangerous.  Trust us.

At least one person was willing to call Brooks on his bullshit, and that was Philip Duffy, president of the Woods Hole Research Center in Massachusetts, who amazingly was asked to participate in the meeting of the House Committee on Space, Science, and Technology, despite being an actual scientist.  He and Brooks had the following testy exchange:


Duffy: We have satellite records clearly documenting a shrinkage of the Antarctic ice sheet and an acceleration of that shrinkage.

Brooks: I'm sorry, but I don't know where you're getting your information, but the data I have seen suggests — "

Duffy: The National Snow and Ice Data Center and the National Aeronautics and Space Administration.

Brooks: Well, I've got a NASA base in my district, and apparently, they're telling you one thing and me a different thing.  But there are plenty of studies that have come that show with respect to Antarctica that the total ice sheet, particularly that above land, is increasing, not decreasing.

In other words, your NASA is clearly wrong.  There are "plenty of studies" showing that my NASA is right.

The whole thing is profoundly upsetting, at least to those of us who know how to read a scientific paper.

On the other hand, at least we don't have to fret about what will happen if the White Cliffs of Dover collapse.  It'll be upsetting to the people in that part of England, no doubt, but there's no worries about the resultant sea level rise flooding Omaha or anything.

Posted by Gordon Bonnet at 2:49 AM