I had a rather mind-blowing experience yesterday, as I was reading a BBC Online article called "Professor Stephen Hawking's Multiverse Finale," by Pallab Ghosh.

You know how sometimes when you're reading a book or watching a movie, and suddenly you realize that a major plot twist is about to happen?  At first, you're thinking, "No... no, that can't be what's happening...  Really?"  Then you think, "C'mon... wow... that couldn't be what this is leading up to!"  And finally, "OMG it actually happened!"

That's how I felt reading this article.

It'd have been interesting even without the sucker punch.  It's about Stephen Hawking's last academic paper, co-authored with American physicist James Hartle and submitted to the Journal of High-Energy Physics ten days before his death, which proposed a solution to the result of the Big Bang (and largely unrelated to the issue of cosmic inflation I wrote about in yesterday's post, except that they happened at the same time) that simultaneously solved several "loose ends" regarding the beginning of the universe.

The problem was, their first attempt at a solution generated another problem; an infinite number of parallel universes, each with their own physical laws, and seemingly no particular reason why a given universe had a given set of rules.

Thomas Hertog, of the Katholieke Universiteit Leuven in Belgium, who contributed to the research, wasn't satisfied with this.  "Neither Stephen nor I were happy with that scenario," he said in an interview with BBC News.  "It suggests that the multiverse emerged randomly and that we can't say very much more about that.  We said to each other: 'Maybe we have to live with it'.  But we didn't want to give up."

So they didn't.  And their investigations concluded something earthshattering:

The multiverse is only composed of universes with physical laws similar to our own. 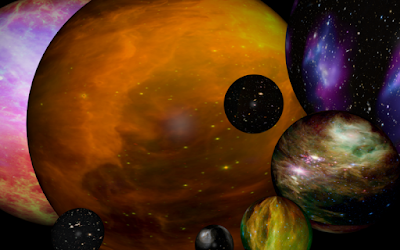 I first ran into the concept that the properties of the universe were controlled by a small number of seemingly arbitrary constants when I read Sir Martin Rees's book Just Six Numbers: The Deep Forces that Shaped the Universe, wherein we find out that there are six that seem "fine-tuned" to generate a universe that can support life: N (the ratio between the electromagnetic and gravitational forces), ε (the strength of the strong nuclear force), Ω (the ratio of the mass of the universe to the critical mass), λ (the cosmological constant), Q (the ratio of the gravitational energy required to pull a large galaxy apart to the energy equivalent of its mass), and D (the number of spatial dimensions).

Rees's book goes into the fascinating details of what a universe would look like if one of those constants was even slightly different than it is.  The end result for most of these nudges is a universe that would be profoundly uninhabitable; in many of them, stars couldn't form, and in some of them, there would be no atoms, only a homogeneous soup of quarks.  Rees himself seems inclined to use this seeming "fine tuning" as support for the Strong Anthropic Principle -- that our universe was created with the physical constants it has so that it will be conducive to the formation of matter, stars, and ultimately, life.

Predictably, that solution has never really appealed to me.  I'm much more inclined toward the Weak Anthropic Principle -- that of course our universe has constants set in such a way as to allow life, because if they hadn't been, we wouldn't be here to ask the question.

But Stephen Hawking's final contribution toward physics may render all of this a moot point.  If the mathematics of quantum physics restricts the Big Bang from forming universes except those with physical constants like our own, it may have been constrained -- and these seemingly un-derivable constants may come from the physics of the Big Bang itself.

Which is mind-blowing.  From the chaos of an infinite number of universes with random physical laws, we have the possibility of a multiverse composed of universes much like our own.  Of course, it still seems certain that there is no travel between our home and these parallel worlds, which invalidates the premise of about half of the plots of Star Trek: The Next Generation (not to mention my own novel Lock & Key).  But that's a price I'm willing to pay.  The contribution of Stephen Hawking, along with his colleagues James Hartle and Thomas Hertog, have brought order to a universe that seemed random, and may have provided us the answer to one of the most fundamental questions -- why our universe has the laws it does.

What more fitting Swan Song could Hawking have had?