When the volcano blows

A recommendation for bloggers and other commentators: if you are going to write about science, make sure you understand the damn science.  And for readers: make sure you find out about the writer's biases.

This comes up because of a link sent to me by a loyal reader of Skeptophilia called, "Why Volcanic Eruptions and Earthquakes are Increasing."  The whole thing pivots on the scary idea that the Earth is becoming more tectonically active, which certainly would have a major impact on humanity.  But let us begin with the most pressing question, which is: are volcanic eruptions and earthquakes increasing? 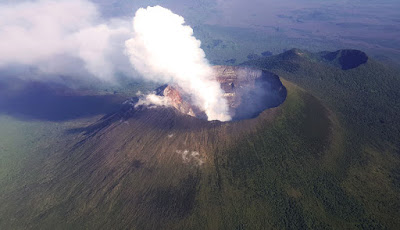 The answer appears to be "no."  According to the site Volcano World, maintained by the geology department of Oregon State University, there is no evidence that there's more seismic or volcanic activity lately.  Not even a slow overall increase over the past few thousand years.  The appearance that there's more rumbling going on, they say, is due to two things:
So we start out with a problem, which is that the central claim appears to be incorrect.  And in fact, if you're talking about violent eruptions, what we're seeing from Kilauea in the last few days is peanuts compared to the eruptions of Krakatoa, Tambora,and Toba in the Indonesian archipelago (respectively in 1883, 1815, and about 75,000 years ago) and the Lake Taupo (New Zealand) eruption in 180 C. E.  And even those pale by comparison to the events that formed the Columbia River Flood Basalts, the Deccan Traps, and the Siberian Traps, the latter of which spewed out 4 million cubic kilometers of lava, an amount that beggars belief, and which is believed to have played a role in the Permian-Triassic Extinction that wiped out 95% of the species on Earth.

But never mind all that.  The next thing the authors throw out is their explanation for this increase (which, recall, isn't occurring anyhow).  And the answer is: cosmic rays.

My first inclination was to guffaw at this, but then I decided to do some research (always a good idea, especially when there's the likelihood of rejecting an idea solely because "it seems wrong").  And I found that there is a (scientific) claim out there that the timing of volcanic eruptions is correlated with sunspot minimums, because those are correlated with a higher cosmic ray flux.  The paper in question is "Explosive Volcanic Eruptions Triggered by Cosmic Rays: Volcano as a Bubble Chamber," by Toshikazu Ebisuzaki, Hiroko Miyahara, Ryuho Kataoka, Tatsuhiko Sato, and Yasuhiro Ishimine, of the RIKEN Advanced Science Institute and the University of Tokyo, which appeared in Gondwana Research back in 2011.  What the scientists propose is that for silica-rich volcanoes, the magma can become superheated, and a cosmic ray could act to trigger nucleation -- quick, explosive liquefaction.

But here's the problem.  The Ebisuzaki et al. study only looked at eleven volcanoes, all in Japan, which already seems like a pretty small sample size.  They found that nine of the volcanoes erupted during a solar minimum, and the other two nearer to a solar maximum.  But without even trying hard I went through some eruption records back to 1700 (the cutoff for their study) and found twelve more stratovolcano eruptions (volcanoes with explosive, silica-rich magma) -- Pinatubo (1991), Mount St. Helens (1980), Novarupta (1912), Santa Maria (1902), Mount Pelée (1902), Krakatoa (1883), Tambora (1815), and La Soufrière (1718, 1812, 1902, 1971, and 1979).  Of those, eight occurred during solar maximums; only two (Novarupta and the 1971 eruption of La Soufrière) were during a clear minimum.  Two eruptions, Tambora and the 1812 eruption of La Soufrière, occurred during a local maximum in the middle of a thirty-year period of overall low sunspot activity (the "Dalton Minimum").  So let's not count those in either column.

So with my additions, that brings us up to twenty-one eruptions -- eleven during minimums, and ten during maximums.

In other words, random chance -- no connection to sunspot activity whatsoever.

Now, I'm neither a geologist nor a statistician, and if there's something wrong with my reasoning, I'm happy to correct it.  But I haven't even hit the punchline yet: the whole thing winds its way around to the claim that the Earth isn't actually warming, it's cooling.

So we're back in climate change denial la-la land, which I should have realized the moment I read them quoting Roy W. Spencer, a meteorologist who is on the advisory board of the denialist, pro-fossil-fuels Heartland Institute.  The site Skeptical Science takes Spencer's claims apart one at a time, and with far more authority than I can wield, so I suggest perusing the site.

Anyhow, the original claim looks like bullshit to me, and yet another example of someone with an ax to grind cherry-picking data that supports what they would very much like to be true.  In any case, I think we can rest assured that the cosmic rays aren't going to cause volcanoes to erupt, and that volcanic eruptions in any case have been pretty frequent occurrences throughout Earth's history.  Me, I'm more worried about the fact that we're still burning fossil fuels like mad despite a near-universal scientific consensus that what we're doing is going to jeopardize the long-term habitability of the planet.  And that seems to me more important than fretting about sunspots and cosmic rays.