I have to resist the temptation of scoffing too quickly, but sometimes it turns out to be justified.

This comes up because of an article from Body Ecology called "Could the Direction You Sleep In Improve Your Health and Well-Being?" that a loyal reader of Skeptophilia sent me yesterday.  The contention of the article is that should never sleep with your head pointing north or west; east or south is best.  Fail to follow this advice, and you're seriously risking getting some horrible disease.  It then goes into some "Eastern medicine" goofiness and stuff about "feng shui" that has no scientific validity whatsoever.

The article states, cheerfully, "[S]cience and eastern medicine both agree" that sleep direction makes a difference, a claim that made me snort derisively.

But one thing caught my eye, which is that the article said there's been a study -- a real study, not some hand-waving mystical nonsense -- that showed people who sleep oriented north/south have shorter periods of REM (rapid-eye movement) sleep than people oriented east/west.  There was no link provided, nor even a mention of where or by whom the study had been conducted, but I thought I'd give the author the benefit of the doubt and try to track it down. 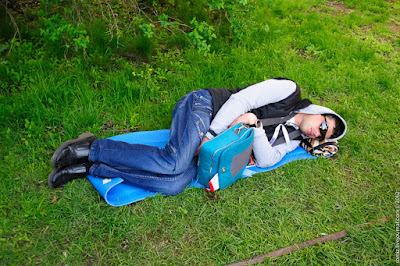 After some digging, I found the paper they were referencing.  It was from way back in 1987, and was written by three scientists in Germany, one at the Max Planck Institute, and the other two at the University of Munich.  Entitled, "Dependence of a Sleeping Parameter from the N-S or E-W Sleeping Direction," wherein eight male subjects were subjected to EEGs for eight nights each, alternating nights while sleeping oriented north/south with nights oriented east/west.  The authors write:


The only significant difference occurred in REM latency which was 5.5 min shorter in E-W direction (p< 0.02).  Other sleep parameters which could be interpreted as stress parameters (sleep latency, intermittent awakenings, percentage of stage 1, stageshifts, movement times) were not different between the two positions.  The same goes for the other parameters.

So the Body Ecology got the facts wrong; the north/south sleepers didn't REM less, they had longer REM latency -- the time from the onset of sleep to the first episode of REM.  And that was only by five and a half minutes.  In fact, there was a great deal more difference between the REM latency of all the subjects for the first four versus the second four nights, regardless of what direction they were oriented -- a difference of 22 minutes.


The adaption effects are balanced out by the fact that two paired subjects slept always in different directions. The fact that among the sleep parameters REM latency is affected by the position of the bed... seems to support our interpretation because mainly REM latency reacts to external influences. Therefore the most probable interpretation of our observation is the assumption that the geomagnetic field influences humans differently depending on their positions relative to the field direction.

I'm no statistician, but it seems to me that eight subjects studied for eight nights, resulting in a difference in REM latency of five and a half minutes and no other significant changes, is pretty weak evidence that there's anything to see here.  It's also significant that the article was published in 1987 -- and I couldn't find a single other study of the claim since that time.

The piece in Body Ecology also mentions a second study (once again, no link) claiming that other mammal species respond to the Earth's magnetic field.  That's not so far-fetched; it's known that many bird species exhibit magnetotaxis, which is orientation based on an internal compass.  (This was discovered by a study way back in 1971 done right here at Cornell University.)  But the mammals claim was new to me, and appears to come from a 2008 study at the University of Duisberg-Essen (Germany) claiming that satellite images of herds of deer and cattle showed that they preferentially oriented their bodies north/south.  The authors don't bother to speculate as to why they would do this, and claim to have controlled for such factors as prevailing wind direction and the angle of the sun.  But a 2011 study tried to replicate the results and failed -- there was no preferred orientation.  Cattle and deer did pretty much what you'd expect they'd do, which is stand around eating stuff facing any way that happens to be convenient.

Of course, weirder things have been claimed.  A 2013 paper in Frontiers of Zoology said that a two-year study of dogs showed that they preferred to poop while aligned north/south.  Which raises a question: who even thought of looking into this idea?  I mean, thinking outside the box is one thing, but this is a bizarre question to ask.  Maybe the scientists, like me, tire of having their dogs turn in circles 832 times before relieving themselves, and wanted to know why they were doing it.

Unsurprisingly, this study was questioned, too, most rigorously by Duncan Forgan over at Research the Headlines, who had the following to say:


On the other hand, the dog’s magnetoception (if it possesses it) does not appear to be particularly effective in general.  When the researchers pooled all the data (calm and not-calm magnetic fields), they saw no evidence of alignment at all, meaning that dogs can only rely on this sense if the magnetic field behaves itself, which only happened during around a third of the researcher’s observations.

It also means that if you own a dog, you are probably unlikely to notice any alignment, unless you’re willing to only note your pup’s pooping practices when you’ve previously measured a stable magnetic field.

An experiment which, frankly, I am not nearly interested enough to carry out.

Anyhow.  It looks like my scornful reaction to the original article is more or less warranted, and any evidence that humans respond behaviorally (or any other way) to the Earth's magnetic field is questionable at best.  If it floats your boat to turn your bed so your head is facing east, knock yourself out, but I'm guessing any difference you notice will be because you expected there to be a change -- i.e., the placebo effect.

For what it's worth, though, I sleep with my head pointing north, and I'm a notorious insomniac.  It's only one data point, but make of it what you will.