Let me be up front about something.  I am no expert on politics.  Most of politics seems to me to be arguing about things that are either (1) so impossibly convoluted that a reasonable solution is practically impossible, like peace in the Middle East, or (2) so blitheringly obvious (to me, at least) that I can't fathom why it's an issue in the first place, like whether LGBT people should have the same rights as cis/hetero people.

Even through my admittedly inexpert eyes, though, this administration has reached levels of corruption, cronyism, graft, and dishonesty that it makes the Teapot Dome Scandal look like a bunch of grade-school posers.  And in the latest evidence of this, we found out yesterday that Donald Trump intends to grant a full presidential pardon to Dinesh D'Souza.

D'Souza, in case you don't know about him, is a conservative commentator who, to put it bluntly, appears to be off his rocker.  Here are a few of his claims to fame:
And so forth.  Suffice it to say that he has a screw loose.  But there's also the fact that he's a convicted felon, having pleaded guilty in 2014 to charges of campaign finance offenses, more specifically making a $20,000 contribution to the New York Senate campaign of his pal Wendy Long, and then lying about it.  He was sentenced to five years' probation and a $30,000 fine.

Except that now Donald Trump is pardoning him, saying he was "treated very unfairly by our government."

Now, hang on a moment.

D'Souza confessed.  He voluntarily pleaded guilty.  And he was given a sentence that was, honestly, pretty lightweight.  How is this being "treated very unfairly?" 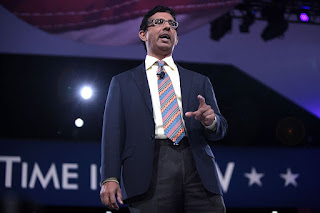 The fact is that D'Souza is a rabid right-winger and loves Trump, so Trump is rewarding him by clearing his record.  It has nothing to do with unfair treatment; it has everything to do with benefiting directly from kissing Trump's ass.

Yes, I know the president can pardon anyone he wants, so it was entirely within his prerogative to pardon D'Souza.  But it sends a message -- you can break laws to your heart's content, and as long as you're a faithful toady, you won't have to face consequences.  You think this won't change the geometry of the cases against Paul Manafort and Michael Cohen?

More than one person has said that Trump is stupid.  In terms of information about world issues, and even about issues within the United States, that appears to be true.  But in terms of pure cunning, and doing what it takes to consolidate and retain power, the man is a genius.  Dismissing him as a "fucking moron" (to quote ex-Secretary of State Rex Tillerson) is to underestimate the man dangerously.  And until we have a Congress that's willing to stand up to his L'état, c'est moi approach, there's not a damn thing we can do about it except for such dubiously useful responses as writing outraged blog posts and hoping that a few people will wake up.