When I considered topics for today's post, the one I was thinking about was so upsetting that I nearly decided to find some cheerful, science-newsy subject to write about instead.  But the more I thought about it, the more I felt like I couldn't leave what was first and foremost in my mind unaddressed.

So here goes.  If you're easily upset, you might want to opt out now.

It all started with Melania Trump's jacket.

Most of you probably know by now that the First Lady went to visit an immigrant shelter in Texas on Thursday while wearing an olive-green jacket that bore the words, "I Really Don't Care.  Do U?" on the back.

On first glance, this is tone-deafness on a level that makes Marie Antoinette's infamous "Let them eat cake" seem minor league.  Melania has given a lot of lip service to the Poor Immigrant Children, so to wear a jacket saying "I Really Don't Care" to a migrant camp is either epic cluelessness, or else... 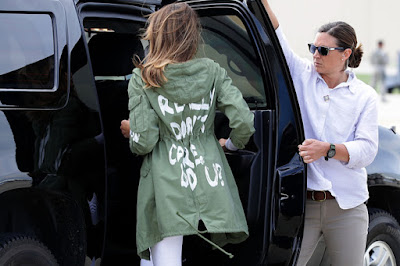 For all of the ridicule that Melania's gotten, she is not stupid.  There is no way that jacket choice was an accident.  She was dog-whistling her husband's rabid base -- people like Ted Nugent, who said that immigrants are "rabid coyotes" who "should be shot on sight."  You don't just pick up an item of clothing with a slogan in huge lettering without giving any thought to what it says or how it might be perceived.

And that goes double if you're the First Lady of the United States.

And triple if you're then wearing it on a tour of a migrant shelter.

So the jacket was a big ol' middle finger and "fuck you" to the immigrants and the people who support their humane treatment.  But what makes this even worse is that there are multiple (and credible) allegations of horrific abuse at these shelters, so Melania's tour, and subsequent conclusion that everything is hunky-dory, is a lot of whitewash over a situation that is about as nausea-inducing as anything I've read recently.

Let's start with one fact; these children are not criminals.  They were brought across the border by their parents.  Whether the parents deserve jail and/or deportation is a discussion we can have.  But these children are guilty only of being in the wrong place at the wrong time.  I won't go into all the allegations, but if you check out the link you can read about the charges that are being levied against not just one, but dozens, of shelters.  Here are a few, all of which are from children under the age of 16:
Workers at these detention facilities say all this happens because the kids are "acting out."  Let me ask you a question that I'd like you to give an honest answer to; if you were fourteen years old, were separated from your parents, kept in unsanitary conditions (many of which have no air conditioning), were ridiculed and abused and drugged, wouldn't you act out?  Wouldn't you fight back?  Wouldn't you try to escape?

I sure as hell would.

One fifteen-year-old, who fled Guatemala to escape an abusive father and child labor, said, "The detention center makes me feel like an animal.  The conditions at the detention center are terrible."  A boy from Honduras said, "I want us to be treated like human beings."  An eleven-year-old named Maricela said, "I do not feel safe here.  I would rather go back to Honduras and live on the streets than be at Shiloh [Treatment Center in Virginia]."

Shortly after giving her sworn statement about the abuse she and others have received, Maricela was transferred from Shiloh to another facility.  Her current whereabouts are unknown.

Elissa Steglich, a clinical professor of psychology at the University of Texas Immigration Clinic in Austin, is unequivocal.  She said, "We've ensured there will be lifelong damage to these children."

Remember what I started with?  The children are not criminals.  But we're treating them like they are.  Worse, actually.  At least there are standards in prison to make sure the guards aren't abusing the prisoners, and the prisoners have at least some recourse if abuse occurs.

Here?  What recourse do these nameless, faceless children have?

What we've heard from the powers-that-be is nothing more than lip service.  The Republican leadership -- which has been shouting "all lives matter" for the last two years, and based their anti-abortion stance on "compassion for the poor children" for a hell of a lot longer than that -- has shown that in their view human rights begin at conception and end at birth.

And if you have brown skin, you probably don't even get that grace period.

It seems to me that we've reached a critical point, where we are establishing who we have become as a nation, whether we will be true to the idealistic "Give me your tired, your poor, your huddled masses yearning to be free" that appears on the pedestal of the Statue of Liberty, or if we've decided that our identity is something darker, more insular, more selfish.  If we choose the latter, there may be no turning back.

So, to go all the way back to what started this post: yeah, Melania, it's pretty obvious you, and your husband, and your husband's hand-picked leadership, "don't really care."  You may as well stop pretending you do.

As for me, I care a lot.  And I can only hope that the fact we are currently being led by a family of lying, cruel, narcissistic grifters is not going to mark the end of America the Compassionate in the history books of the coming centuries.