Apparently a new strategy amongst the severely religious is to send out broadside literature through the mail. I know this because a friend of mine got one.  However, given that (1) my friend didn't request the letter, and (2) it was warmly and personally addressed to "Occupant," you have to wonder how successful this strategy is going to be.

It's not like junk mail is as lucrative a business as it used to be, given that you can send out ten thousand emails for less than the cost of a single snail-mail letter.  But evidently this hasn't dissuaded some of these folks from trying the old fashioned way.

Anyway, how this all came up is that a couple of days ago, my friend came up to me, grinning, with some papers in his hand, and said, "When I got this, I immediately thought that you should have it."   I've found that since I'm mostly known for my interest in woo-woo crackpots, this is seldom a good sign.  And sure enough, this letter was way off to the "Wingnut" end of the spectrum.

The first thing I opened was a large, garishly-colored piece of textured paper that has a pattern around it in crimson and gold that looks a little like a Persian rug.  After unfolding it, I said, and I quote, "Holy shit!"  Because facing me was a nearly life-sized image of Jesus' face, eyes closed, wearing a crown of thorns.  As luck would have it (and sine apparently I'm not the only person who's come across one of these), I was able to find an image of it online: 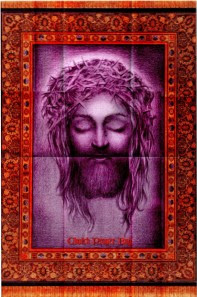 One disconcerting thing is that the face looks to my eyes more like Jase Robertson from Duck Dynasty than it does like my concept of The Lord And Savior, but that may just be me.  Be that as it may, the instructions on the bottom read:


Look into Jesus' eyes you will see they are closed.  But as you continue to look you will see His eyes opening and looking back into your eyes.  Then go and be alone and kneel on this Rug of Faith or touch it to both knees.  Then please check your needs on our letter to you.  Please return this Prayer Rug.  Do not keep it.

My first thought was that if I was staring at this picture and its eyes opened, I would probably want to be alone for an entirely different reason, namely that I would think I'd lost my marbles.  But then I thought: maybe there's some reason why people see this happen.  I know that staring fixedly at something does mess around with your visual integrative system, creating afterimages and all sorts of odd effects.  So I looked closely at the drawing, and I noticed that in the center of each eye was a faint dot, with a lighter spot up and to the left -- like a ghostly image of a pupil and a point of light reflected from the surface of a human eye.  Stare at the picture long enough, I'd guess, and those features might make the eyes begin to look as if they were open.

So I folded up and put away the "Prayer Rug," because that picture is freakin' creepy, and picked up the next one, which said, "Please don't open this prophecy until after you have placed your prayer page (page two of our letter to you) and the Prayer Rug back in the mail before sunset tomorrow or the next day.  God will help you to do this.  You will see."

Now, you have to wonder why anyone would need God's help to put something in the mail, but I may be reading this wrong.  In any case, I threw caution to the wind and opened the secret prophecy.  The prophecy turned out to be a page of fine print, and I frankly do not feel like copying the entire thing, but the gist of it is that God knows I'm not happy with my life, and that in fact he has the impression that I'm kind of a pathetic sonofabitch.  (I paraphrase slightly.)  But in order to have ENDLESS JOY (capitalization theirs) all I have to do is allow God's spirit to work through me by praying a lot and sending a donation to the church that sent this letter.

The remaining pieces of paper were the checklist of what I'd like them to pray for on my behalf (after I saw Jesus' eyes open on the "Prayer Rug"), and some testimonials from folks about what they'd gotten.  Some of these included:
All of which sound pretty awesome, but honestly, I think I'll spare them the trouble.  Given my rampant atheism, I think God (if he actually exists) would not have a particularly strong motivation to shower me with gifts even if these people prayed for me because I'd sent them a checklist and returned their "Prayer Rug."

Honestly, how do the groups who send this stuff out think this could possibly work?  (As a religious strategy, not a money-making opportunity, since the way that works is pretty obvious.)  I guess that since they seem pretty sincere about wanting to do good stuff for total strangers, I can't argue with their motives.  There was none of the "Oh, and if you don't believe what we're saying, you will BURN IN AGONY FOR ALL ETERNITY HA HA HA HA" business you usually see with missives of this sort.  So, as these things go, it was pretty friendly, as long as you discount the scary drawing of Jesus.

But I still must ask the question -- if they think that God knows everything and has a plan for everyone, and will always make sure everything works out for the best (for all of which there was ample evidence on the "prophecy page"), isn't it contradictory to believe that they could change someone's destiny by praying, using the person's wish list of stuff (s)he'd like to have?  Do they think that God is sort of like Santa Claus, reading a kid's Christmas list and going, "I didn't know little Billy wanted a Lego set!  Well, we'll just have to have the elves make him one!  Ho ho ho!"  If there is a God, I somehow can't imagine that he works that way.

So, the open question is what to do with the letter, "Prayer Rug," and the lot.  I think I'm going to give it back to my friend.  After all, it was addressed to him ("Occupant"), so if anyone should get all of the bad luck from not returning the "Prayer Rug" to the church, I think it's only fair that it should be him.  Okay, I opened the Prophecy before I was supposed to, but if I seal it back up with a little piece of scotch tape, maybe God won't notice.