In a study released last week by a team of psychologists working at the University of British Columbia, we find that in an extensive survey of 1,266 men from the ages of 16 to 70, guys who had used psychedelic drugs (specifically LSD or psilocybin) had a statistically significant lower likelihood of abusing their partners.

Given the role of psychedelics in changing levels of activity of serotonin -- a major mood-regulating neurotransmitter -- it's unsurprising that this correlation exists. 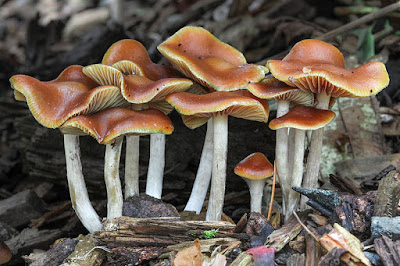 [Image licensed under the Creative Commons: This image was created by user Caleb Brown (Joust) at Mushroom Observer, a source for mycological images.You can contact this user here., 2013-10-22 Psilocybe cyanescens Wakef 378614, CC BY-SA 3.0]

What is more surprising is that apparently, it only takes one use.  Consider, too, that one use of another psychedelic drug -- ketamine -- has been found to relieve many cases of intractable depression, acting in as little as thirty minutes and providing dramatic improvements that last for months.

If you've checked out the links, you may have noticed that none of these studies took place in the United States.  The first one was done (as I mentioned) in Canada; the research on ketamine was the result of two studies done in China.  Here in the United States it's extraordinarily difficult even for neuroscientists to obtain permission to experiment with psychotropic drugs, and there's been strong resistance to easing up these regulations by a group I can only describe as being the Morality Police.  Odd, isn't it, that alcohol -- a clearly mood-altering drug that is responsible for (by estimates from the National Institute of Health) 88,000 deaths yearly -- is legal.  Tobacco, which kills even more than that, is not only legal but is federally subsidized.

Psychedelics are unequivocally illegal in all fifty states.  At least some motion forward has happened with marijuana, which has been known for years not only to be effective for pain relief in terminal cancer patients, but has shown promise as an anti-anxiety medication.  The problem seems to be that marijuana and psychedelics have both become associated with recreational use, and I guess there's a sense that therapeutic agents shouldn't be fun.

I dunno.  Maybe there's a better reason, but if so I've never been able to figure it out.  It seems to me that careful administration of chemicals that can potentially alleviate depression and anxiety shouldn't be dependent on people moralizing about what amounts to this century's version of Demon Rum.

This is brought into sharper relief by the suicide last week of Kate Spade and Anthony Bourdain.  Depression is reaching epidemic proportions.  I use the word "epidemic" deliberately, and not as hyperbole.  Another study, released just three days ago by the US Center for Disease Control, has found that since 1999 there's been a thirty percent increase in suicides in the United States.  Only one state -- Nevada -- had a decrease, and that was by only one percent.  Twelve states had an increase of between 38% and 58%.  The result -- suicide has become the third highest cause of death, and is so frequent it's actually contributed to a statistically significant drop in American life expectancy.

This is a personal one for me.  As I've mentioned before in Skeptophilia, I've suffered from moderate to severe depression and serious social anxiety for as long as I can recall.  The depression is being controlled reasonably well by medication; the anxiety is still a work in progress.  But if I could knock out my depression -- potentially get off antidepressants permanently -- by one hit of ketamine, one use of LSD or psilocybin -- I'd do it in a heartbeat.  And I'd like to hear, if any of my readers are in the no-way-no-how column of the legalization controversy, a cogent argument about why I should not be allowed to do that.

Interestingly, I was asked that very question by one of my oldest friends, even before the tragic suicides of Kate Spade and Anthony Bourdain.  Would I be willing to try it?  Would I do so even before it was legalized?  My answer was an unequivocal yes.  Given a reasonable dosage, and friends to make sure I didn't do anything stupid while high, what exactly would be the risk?  Speaking perfectly honestly, if a 57-year-old middle-class science nerd with no social life had any access to the chemicals in question, I'd already have done it.

Perhaps we're waking up, though.  Like I said, there is an increasing push to legalize certain drugs, and that's encouraging.  (Nota bene: I'm not saying these drugs should be completely unregulated.  There are very good reasons for keeping them away from children, and for making sure that they're not used before someone gets behind the wheel of a car.  But if we can handle those challenges with alcohol, we can handle them with other chemicals.)  It's to be hoped that we'll see reason -- and potentially do something to alleviate the suffering of people whose illnesses have heretofore been essentially untreatable.

And maybe, in the process, reduce some of those suicide numbers, which are absolutely horrifying.