I know I've said this before, but one of the most baffling things for me about the Trump presidency is that evangelical Christians (most of them, at least) not only voted for Trump, but consider him to be the Anointed One of God.

You would think that listening to Trump for five minutes would be enough to disabuse you of that notion.  The man is a crude, vulgar, greedy, grasping, dishonest, misogynistic, narcissistic philanderer.

To put not too fine a point on it.

Okay, I know people make a deal with the devil in politics sometimes.  You vote for someone who agrees with you on some cause you are passionate about, and overlook his/her faults in other realms.  But that doesn't seem to be what this is.  These people not only agree with his agenda -- especially regarding restricting the access to abortions, eliminating LGBT rights, American isolationism, and protecting the rights of churches to discriminate based upon their religious precepts -- they actually seem to think that he's some kind of modern-day holy man, without fault, appointed by God to bring our nation back from the brink of hell.

Consider, for example, the recently-released book by David Brody and Scott Lamb called The Faith of Donald Trump: A Spiritual Biography, which claims that Trump's agenda is "spiritually motivated" and his rapacity and apparently insatiable libido are evidences of a "quest for God."  You'd think no one would be able to read this without guffawing -- and hearteningly, 42% of the reviews are one-star -- but one reviewer said:


Great biography of a man of God.  Well written to understand about D Trump's character and can see clearly who he is in Christ.  I don't question anymore why he speaks & act such a way but trust him as loving person in depth.  No one can be without fear if the person does not stand on God's truth.

Recall that Trump is the same man who was asked if he ever asked God to forgive him for sins, said that he couldn't remember ever doing that.  "When I drink my little wine -- which is about the only wine I drink -- and have my little cracker," Trump said, "I guess that is a form of asking for forgiveness, and I do that as often as possible because I feel cleansed."

The people who espouse the view that Trump is Jesus's right-hand man believe this with a fervor that borders on obsessive mania.  Consider the photograph of the back of a car that has been making its way around social media in the last week: 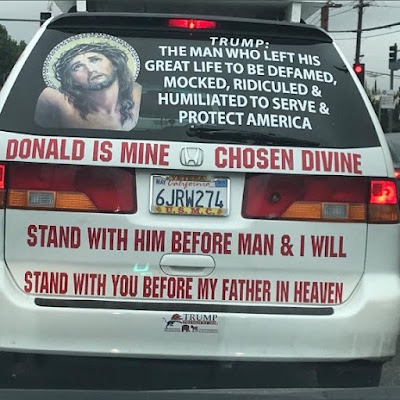 Well, honestly, he "left his great life" primarily to make sure that legislation gets passed that lines his own pockets and those of his cronies.  Trump and his family are using his position as a way of bringing in cash -- witness Ivanka's recent win of exclusive trademarks from China -- followed by her father rewarding them by promising to bail out Chinese telecom firm ZTE.

Because that doesn't violate the Emoluments Clause, or anything.

But no one exemplifies the bizarre characterization of Trump as Savior better than televangelist Jim Bakker, who steadfastly refuses to Go Gently Into That Good Night even though he appears to have completely lost his marbles.  Last week, Bakker had End Times prophet Paul McGuire on his show, and McGuire warns that because Trump is God's representative on Earth, the Forces of Darkness are amassing to fight back:


America right now is in the greatest spiritual battle in the history of all of mankind.  In fact, in America, we are undergoing the greatest spiritual battle in the history of the world…  So this is it.  We don’t get another chance.  This is it.  We’ve arrived at the moment Jesus told us we would, the Old Testament prophets told us we would.  We are at that time, somewhere near the return and the coming of the Lord Jesus Christ to the earth.  We are very close!

President Trump represents the one last chance to cry out to God in repentance and see God intervene... we are the last generation of Americans… before the return of the Lord...

The physical battles that we see in our world and nation right now are a direct manifestation of the spiritual battles going on in the invisible realm.  There are people very high up in what is called the globalist occult or globalist Luciferian rulership system, and this rulership system consists of what used to be called the Pharaoh-God Kings, it’s what Aldous Huxley called ‘The Scientific Dictatorship,’ and these are advanced beings who know how to tap into supernatural multidimensional power and integrate it with science, technology, and economics.


Well, all I can say is, if hating Trump qualifies you for supernatural multidimensional power, sign me right up.  But I've hated Trump for ages, and I don't have wings or telepathy or the ability to turn invisible or anything.

I feel kind of ripped off, frankly.

(It does bear mention, however, that one of the people who responded to this story wrote, "I think Paul McGuire has been smoking way too much covfefe lately.")

Anyhow, it's all kind of baffling to me.  I mean, this goes way beyond the sunk-cost fallacy and wishful thinking right into the more rarefied atmosphere of complete self-delusion.  I suppose, given how much evidence you had to ignore to support Trump in the first place, I shouldn't be surprised.  It never was about rationality in the first place.

But it still leaves me feeling like I want to board the next spaceship to Alpha Centauri.