Today's post is about several links that all appeared in my inbox more or less simultaneously, and are even more interesting in juxtaposition.

First, let's look at the study that appeared this week in the European Journal of Social Psychology called "'They've Conspired against Us': Understanding the Role of Social Identification and Conspiracy Beliefs in Justification of Ingroup Collective Behaviour," authored by Maria Chayinska and Anca Minescu.  The gist of the research is that people jump into belief in conspiracy theories with the greatest of ease -- as long as such belief reinforces the behaviors of the social groups they already belonged to.

The study looked at 315 people in Ukraine, split between people who were supporters of the anti-Russian "Euromaidan" movement and ones who were against it. The researchers presented them with (false) conspiracy theories about the annexation of the Crimea by Russia, and looked at the degree to which they believed it without question.  The Euromaidan supporters were far more likely to accept the conspiracy theory that secret societies and evil plots were at work to sabotage the Ukrainian resistance movement.


We found that supporters of a particular cause not only were prone to endorse specific conspiracy beliefs but also to use them in a blame game, thus justifying collective behavior of the group they identified with.  Contrarily, the opponents of the same cause were found not to endorse those beliefs at all.  Thus, we found how ideologically charged social identities align with the tendency to believe in particular conspiracy theories surrounding acute political and societal issues that commonly cause a divide in a public.

Conspiracy theories are ideological in nature, so people who either strongly endorse or oppose them have a reason to do so.  This reason is oftentimes rooted in their psychological commitment and loyalty to particular social groups that advocate a certain ideology.

Which is an interesting, if not especially surprising, result.

The same day as a loyal reader of Skeptophilia sent me the above story, I received five -- count 'em, five -- links addressing the current practice of indefinite separation of children from parents who are attempting to immigrate to the United States.  Let's take them in order of least-to-most egregious:


This is one of those moments that tells you everything about our ruling class.  They care far more about foreigners than about their own people.  You probably suspected that already.  [The Left's] only solution is immediate amnesty for anyone who crosses our borders with a minor in tow.  And of course, that's the same as no borders at all.

Well, if you think that everyone objecting to the horrid treatment of these children is a member of "the Left," you're including Ben Sasse, Susan Collins, Laura Bush, Bill Kristol, Ted Cruz, John McCain, and (for fuck's sake) Reverend Franklin Graham.  And Carlson's blatant straw man argument -- that Democrats are, one and all, for completely opening the borders to anyone -- is so idiotic it hardly deserves refutation.  (Allow me to say only that I defy you to find one elected official, left or right, who has proposed allowing unrestricted immigration.  Just one.)


As more illegal immigrants are rushing the border, more kids are being separated from their parents.  And temporarily housed at what are, essentially, summer camps.

Lady, I don't know what kind of summer camp you attended as a kid, but I'm guessing it didn't require sleeping inside a locked cage.

Speaking of cages, there's Steve Doocy, of... guess where?:


While some have likened it to — them to concentration camps or cages, you do see that they have those thermal blankets, you do see some fencing, but keep in mind — some have referred to them as ‘cages,’ but, keep in mind, this is a great, big warehouse facility where they built walls out of chain link fences.

So not cages!  Just nice guest rooms!  With chain-link walls and cement floors!

Working our way up the nausea-induction scale, we have none other than Ann Coulter, who I honestly thought had decided she had better things to do than to vie for the 2018 Eva Braun Award, but I guess I was mistaken.  Here's what she said:


I get very nervous about the president getting his news from TV...  I would also say one other thing, these child actors weeping and crying on all the other networks 24/7 right now — do not fall for it, Mr. President...  A New Yorker article, the New Yorker is not a conservative publication, they describe how these kids, these kids are being coached.  They’re given scripts to read by liberals, according to the New Yorker.  Don’t fall for the actor children.

No worries!  The screams are all scripted!  Says so right in a non-existent article in the New Yorker!  (Maybe the kids are the same "crisis actors" the Deep State got to portray the victims of the Sandy Hook, Marjory Stoneman Douglas, and Boston Marathon massacres.  May as well reuse them, since it worked so well.)

But, if you can believe it, one person went beyond Ann Coulter, which I didn't even think was possible.  So if we can take one more turn on the justification merry-go-round, let's look at Christian television host and moderator of the podcast Faith & Freedom, Leigh Valentine.  The kids aren't actors, Valentine said; they're actually -- evil:


Immigrants crossing the border are committing rape after rape after rape.  Children below ten years old engaging in sexual activity — all kinds of sin and disgrace and darkness; the pit of the pits...  So we’re not getting the top-of-the-line echelon people coming over this border.  We’re getting criminals.  I mean, total criminals that are so debased and their minds are just gone.  They’re unclean, they’re murderers, they’re treacherous, they’re God-haters. 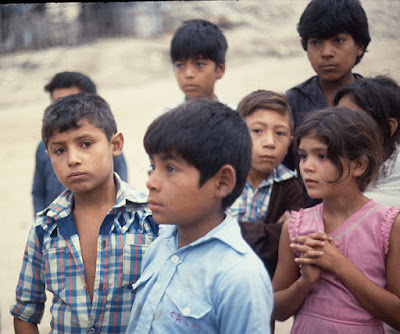 Look, I'm not claiming I have an easy answer.  As I said earlier, I -- like damn near every left-leaning person in the United States -- am not proposing opening the borders and letting anyone in who wants to.  But the vast majority of these people are not criminals (and they fucking sure aren't actors, Ann Coulter).  They're people who are desperate because of awful conditions in their home countries, who want what all of us want -- a clean, comfortable place to live, enough food and water, and opportunities for their children.  Whatever the answer is, it is not demonizing them, dehumanizing them, and/or claiming that what they're going through is not so bad.

If you think a while, you might come up with a few instances in history where the people in power had precisely the same response to the plight of children being held in involuntary captivity.

None of those ended well.

What we are doing right now is wrong.  Pure and simple.  Separating children from their parents is immoral.  And don't start with me about under whose administration the practice started; that's entirely irrelevant.  It's happening now, and it's happening on a scale the likes of which we have never seen.

You stand up against it, or you have abandoned all claim to the moral high ground.

But it does make a weird sort of sense, in light of the Chayinska and Minescu paper we started with.  If you already believe that we're under siege, that immigrants are a threat to everything we hold dear, it's only a small leap to believing that the immigrant children themselves are to blame, or that the whole thing is some kind of grand conspiracy to destroy The American Way.

And all I can say is, if this is The American Way, I'm horrified at what our country has become.