The smell of death

In Agatha Christie's wonderful novel The Pale Horse, a group of self-styled witches claim to be able to curse someone to death.  And they're happy to do it for you -- under a dubiously moral but entirely legal scheme wherein you bet the ringleader that your worst enemy is going to die within six weeks.  If your enemy dies, as promised, you pay up.  If not, the witches pay you.

Because, after all, you haven't asked anyone to act as a hit man -- all you've done is speculate that someone is going to die.

Of course, given that it's Christie, there's no chance that there's actually anything supernatural going on, and the death-by-curse scheme is actually a cover for very deliberate murder.  I won't spoil it further for you, because it's a hell of a read (you can buy it at the link above); but the point is that even when things look their woo-iest, there's usually some sort of completely rational explanation behind it.

This all comes up because of a claim I ran across over at the site Mysterious Universe, in an article by Paul Seaburn called, "Psychic Claims She Can Smell Your Impending Doom."  In it, we hear about a woman named Ari Kala, of Hunter Valley, New South Wales, Australia, who claims that she can tell if someone's going to die -- by their smell.

Kala tells about her first experience with this alleged ability, at age twelve, when she detected an odd odor from someone who was dying.  'The night before his death I picked up this odd, sickly sweet rotten kind of smell in the house," Kala said.  "I thought it was the smell of his remains as I had never smelled that before.  But no one else could smell it." 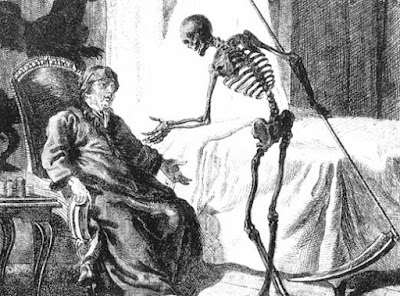 When she became an adult, she became aware of other psychic abilities (she claims), and started working as a "psychic coach."  But the ability to smell death remained with her.  It wasn't pleasant, she says, and not just because death doesn't smell so good:


Sometimes it feels like a burden.  I used to want to say something, however, I realized it’s not my duty.  It’s kind of useless – how could it help anyone?  How I can walk up to strangers with this smell and help them?  What if they don’t know they are going to die soon?  If I told them that and they weren’t aware, it could be catastrophic.  I don’t see how it’s up to me to interfere with their fate.

Which I suppose makes sense, not to mention the fact that it would make her sound more than a little threatening -- rather like our witches-for-hire in The Pale Horse.

So is there anything to this?  If she'd claimed that she could tell if anyone was going to die, by any means, I'd be inclined to laugh it off.  Such abilities also appear in fiction, most famously in one of the best-ever episodes of The X Files, "Clyde Bruckman's Final Repose."  As interesting as this idea is, there's no way I'll believe someone who claims that they can tell that tomorrow I'm going to get pushed in front of a Mack truck or something because I smell funny.

But what makes me wonder is that Kala says she's only picked up the smell in places where people are dying of natural causes -- hospitals and old-age homes.  It made me think of a study two years ago of dogs that can detect cancer by smell -- in some cases, before the tumor is causing any obvious symptoms.  The ability, which has not been thoroughly researched, is thought to come from dogs' sensitivity to volatile organic compounds released either by the cancer itself or by the body's attempt to fight it, but that piece is speculative.

So could Kala be picking up on something like that?  I suppose it's possible, but the difficulty is that it's not going to be easy to test.  It's not like hospitals would welcome the Death-Sniffing Psychic to wander around in the ICU.

And whatever's going on here -- whether it's a hoax (after all, she's only made the claim after the person in question has died, making it easy enough for her to say she smelled it beforehand), or whether she actually has a nose sensitive to the onset of death -- I'd be willing to bet a significant amount of money that there's a perfectly rational explanation behind it, just as there was with our group of Evil Witches For Hire in The Pale Horse.