Acupuncture is one of those "alternative medicine" treatments that has long seemed to me to live in that gray area between scientific soundness and woo-woo quackery.  It has a lot of woo-woo characteristics; all manner of goofy explanations about why it works (qi and chakras and energy meridians), and that mystical haze that always seems to surround something that comes from China.  However, enough friends of mine (of the decidedly non-woo-woo variety) have tried it, with positive results, that it's always made me wonder if the treatment itself might be beneficial, even though the explanations were incorrect -- in much the same way that medicinal plants were used to treat disease, and were thought to be inhabited by the spirit of healing magic, long before pharmacological chemistry was a science.

Just yesterday, however, I came across a piece from a few years ago in the excellent, well-researched, and multiply-sourced medical science blog, Respectful Insolence that takes acupuncture's claims and evidence apart at the seams.  It particularly attacks the so-called scientific studies of acupuncture, citing major methodological flaws that render the studies that found positive results invalid.  Whether or not you are a believer in acupuncture, it's an interesting read and makes some points that are difficult to counter.

In any case, all of that is just a lead-in to what I wanted to write about today.  Today's topic is about a new therapy that grew out of acupuncture, one that was developed because you can't undergo acupuncture without letting yourself get stuck by needles.   And a lot of people are afraid of needles.   So practitioners gave a lot of thought to how you could somehow achieve the same thing -- stimulating the qi and jump-starting your energy meridians, or whatever the hell it's supposed to accomplish -- without punching the patient full of tiny holes.

Interestingly, from what I've read about it, "colorpuncture" has been around for a while.  First proposed in 1988 by a German woo-woo named Peter Mandel, it combined the ideas of acupuncture with the ideas of Fritz-Albert Popp.  Popp is a German biophysicist who believes, despite a rather unfortunate lack of evidence, that cells in living organisms communicate via "biophotons."  So, Mandel's plan: combine an alternative medical technique that is questionable at best (acupuncture) with a hypothesis that seems to be complete nonsense (biophotons), and use that as the basis of a new treatment modality.

So, in "colorpuncture," rather than having the practitioner stick you with a lot of nasty needles, all (s)he does is point a little beam of colored light at the correct spot on your skin, and that stimulates the qi (or whatever).  Or maybe your "biophotons" get all excited and happy.   Who the hell knows? All of the sites I looked at spent so much time blathering on about energy meridians and vibrational frequencies that it was impossible to determine what they actually are claiming is happening in your body.  One of the funny things I read about "colorpuncture" is that "warm" colors such as red, orange, and yellow are supposed to increase your "energy flow," whereas "cool" colors such as green, blue, and violet are supposed to decrease it.  Why is this funny?  Because as you go up the spectrum from red to violet, the frequency of the light, and thus its energy, actually increases -- violet light is considerably more energetic than red light is.  But there never was any real science behind this, so why start now? 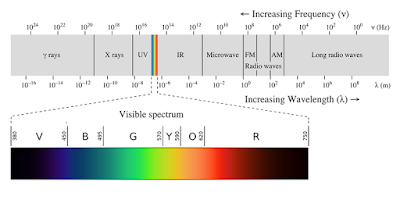 In any case, it took a while for "colorpuncture" to catch on after Mandel had his big idea back in 1988.  But apparently it's really made a jump into the woo-woo scene recently -- and given the hunger people have for "alternative treatments" that don't require a visit to an actual, trained doctor, I suspect this one is going to be big.

Interestingly, there are plenty of reputable studies that have looked into the effects of light on human physiology -- two of the more interesting ones are Richard J. Wortman's study out of MIT, and one by Jeanne Duffy and Charles Czeisler, from Harvard School of Medicine.  Most of the papers I saw looked into the effects of light on human circadian rhythms -- the sleep cycle, for example.  (Reading these papers made me wonder how all of our artificial lighting is affecting our physiology, especially apropos of the entrainment of our biological cycles -- it's certainly incontrovertible that the light from computer screens affects melatonin levels, and thus our ability to sleep.)

But "colorpuncture?"  Not a single peer-reviewed study that I could find.  I suspect the practitioners of this dubious art would claim that this is due to the closed-mindedness of scientific researchers and peer review boards, but come on -- if acupuncture, which at least involves something entering the body, can't prove any therapeutic results beyond the placebo effect, "colorpuncture" doesn't have a prayer.

At least one thing, however, is in its favor; no one ever got a blood-borne disease from a little colored flashlight.  So I suppose that medical science's first rule -- "do no harm" -- is being followed, at least as long as you're not counting your pocketbook.