Because we all clearly needed something else to worry about, today we have: the mega-asteroids of doom.

This comes up because of a new program at NASA, now that the Trump administration has freed them from the necessity of worrying about climate change.  Called the "Large Synoptic Survey Telescope," this project involves building a huge telescope in Chile that will be looking for "potentially hazardous asteroids" (PHAs).  The idea is that they'll scan the sky looking for any hitherto-unrecorded astronomical object that shows apparent movement against the background stars in an hour.  "Anything that moves in just one hour," writes project leader Michael Lund, astrophysicist at Vanderbilt University, "has to be so close that it is within our Solar System."

It's not like this is an inconsequential threat.  Barringer Crater, in northern Arizona, is a huge hole in the ground that was caused by collision with a nickel-iron meteorite fifty meters in diameter.  The Chesapeake Bay Impact Event, about 35 million years ago, is 85 kilometers across, and was caused by an object about three kilometers wide -- the impact was enough to cause a tsunami that hit the Blue Ridge Mountains.  The mother of 'em all, though, is the 150 kilometer wide Chicxulub Crater, 66 million years ago, which blew up a layer of dust that settled out as clay all over the Earth -- and is thought to have kicked off the Cretaceous Extinction, the final straw for the dinosaurs (except for the ones who were the ancestors of modern birds).

What is cheering, however, is that these events aren't frequent.  The Chelyabinsk meteor of 2013, which exploded 32,000 meters above the Earth's surface but still was able to generate a shock wave big enough to injure 1,200 people.  The object that caused the blast is thought to have been about twenty meters across -- nothing compared to Chesapeake Bay and Chicxulub, but still a little on the scary side. 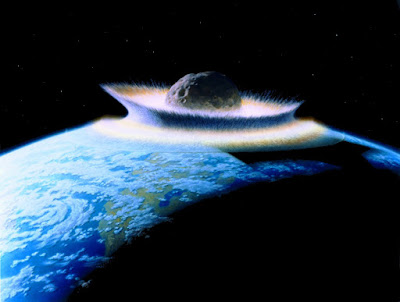 No one doubts that there are lots of objects out there that could potentially play Whack-a-Mole with the Earth.  The LSST gives us hope of finding them before they find us.  The unfortunate part, however, comes when Lund addresses the question of what we could do about it if we discovered that a huge rock was on a collision course with Newark:


If an asteroid is on a collision course hours or days before it occurs, the Earth won’t have many options.  It’s like a car suddenly pulling out in front of you. There is little that you can do.  If, however, we find these asteroids years or decades before a potential collision, then we may be able to use spacecraft to nudge the asteroid enough to change its path so that it and the Earth don’t collide.

This is, however, easier said than done, and currently, no one really knows how well an asteroid can be redirected.  There have been several proposals for missions by NASA and the European Space Agency to do this, but so far, they have not passed early stages of mission development.

So it looks like if you found out that day after tomorrow, your home town was going to get clobbered, you'd have two options: (1) get in your car, drive like hell, and hope for the best; or (2) put your head between your legs and kiss your ass goodbye.  I suppose that's better than nothing, especially considering that the alternative is thinking you're going to take a nice nap in your hammock and instead getting vaporized by an enormous superheated rock.

But even so, there's the problem of what it's going to be like for the rest of the Earth, the ones not in the impact zone.  Any impact -- even a relatively small one, like the one that formed Barringer Crater -- is actually going to have an enormous effect even on very distant places, just from the standpoint of kicking up a crapload of dust.  (Recall that when the volcano Tambora erupted in 1815, it caused "the Year Without a Summer," during which crops froze in mid-July and hundreds of thousands of people died of starvation.)

Nearer to the impact site, things get even worse.  Consider the Chelyabinsk meteor, which by comparison is a popgun -- not to mention the fact that it self-destructed 32,000 meters up, and never hit the surface.  The shock wave would be astronomical.  Pun intended.  Closer still, and the heat blast would flash-fry anything in its way.

You don't even get a pass if the impact is in the ocean, because then you've got hundred-foot-high tsunamis to worry about.

The best-case outcome, here, is that Lund and his colleagues scan the sky with the LSST for a while, and say, "Welp.  Nothing much out there.  I guess everything's hunky-dory.  As you were."  Or, that any projected impact will take place thousands of years from now.  (I figure that anyone around then will just have to fend for themselves.)  Or, perhaps, that we could use our technology to redirect the asteroid away from colliding with us.  Lund says this is already being looked into:


The B612 Foundation, a private nonprofit group, is also trying to privately raise money for a mission to redirect an asteroid, and they may be the first to attempt this if the government space programs don’t.  Pushing an asteroid sounds like an odd thing to do, but when we one day find an asteroid on a collision course with Earth, it may well be that knowledge that will save humanity.

I'll be watching the results, though, because being a little on the anxious, neurotic side, I definitely need another thing to keep me up at night.  On the other hand, it's at least temporarily taken my mind off all the other problems we're facing.  Which is good, right?