What I find the most stunning about scientific research is the breadth and scope of what it uncovers about the universe.

Think about it.  In the last hundred years, we have gone all the way from quarks -- particles a third the size of a neutron, or an average of 4 x 10-27 kilograms -- to the largest known structure in the universe, the Virgo Supercluster, which is 110 million light years across.  We have a decent picture of what happened at each stage in the development of the cosmos, all the way back to the Big Bang, 13.6 billion years ago.  We have found out about how our DNA guides our development from a single fertilized egg, how evolution has generated the biodiversity of the nine-million-odd species on Earth, and how the thoughts you're having as you read this are encoded and modulated by tiny electrochemical signals amongst the 100 billion neurons in your brain.

It is beyond me how anyone could consider these things and not be entirely overawed by the grandeur of it all.

It's why I get a little impatient with people who say that looking for scientific explanations cheapens our sense of beauty and wonder.  "Why can't you just look at the flowers and appreciate them?" I've heard people say.  "You have to classify and name and dissect instead."  Well, all I can say is my love for flowers is only deepened by the fact that I know how photosynthesis is working to convert sunlight to chemical energy in their leaves, that the daylilies in my garden have specialized structures for attracting pollinators so they can reproduce, and that the tomatoes currently laden with fruit in my wife's veggie garden are close cousins to peppers, potatoes... and deadly nightshade.

So that's why it was with an almost visceral sense of wonder that I read a paper last week about the detection of a neutrino that originated four billion years ago in one of the most powerful energy sources in the universe -- a blazar. 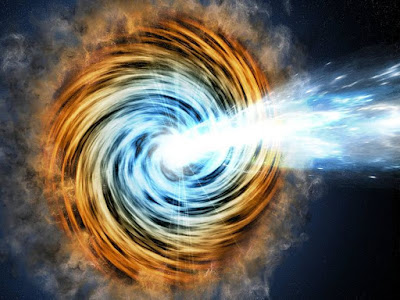 Artist's depiction of a blazar [Image is in the Public Domain, courtesy of NASA/JPL]

A blazar is an active galactic nucleus, powered by a supermassive black hole, which spews out a jet of particles propelled at very nearly the speed of light.  It'd be significantly unfortunate for any planetary systems that the jet is aimed toward; that's why the ones we know about are really far away, so we can analyze the jet and its source without being fried to a rich crispy golden-brown.

This all comes up because of a paper that appeared in the journal Science last week.  A team of scientists analyzing data from the IceCube particle detector, buried a kilometer deep underneath an ice sheet in Antarctica, detected a neutrino with an energy of nearly 300 trillion electron volts.  Naturally, a particle that energetic immediately attracted attention, leading to the question of where it had come from and what had given it that hard a kick.  Tracing its origin from the angle at which it hit the detector, they determined that it had started as part of a jet of gamma rays and other particles from a blazar with the euphonious name TXS 0506+056, 3.7 billion light years away in the constellation Orion.


Neutrinos interact only very weakly with matter, but giant detectors have succeeded in detecting small numbers of astrophysical neutrinos.  Aside from a diffuse background, only two individual sources have been identified: the Sun and a nearby supernova in 1987.  A multiteam collaboration detected a high-energy neutrino event whose arrival direction was consistent with a known blazar—a type of quasar with a relativistic jet oriented directly along our line of sight.  The blazar, TXS 0506+056, was found to be undergoing a gamma-ray flare, prompting an extensive multiwavelength campaign.  Motivated by this discovery, the IceCube collaboration examined lower-energy neutrinos detected over the previous several years, finding an excess emission at the location of the blazar.

Astronomer Regina Caputo, of NASA's Goddard Space Flight Center in Maryland, was less measured in her response, but what she said illustrates the fact that understanding deeply what's going on doesn't decrease your wonder or enjoyment.  "This is crazy, the sky is erupting," Caputo said to reporters.  "I almost couldn’t believe it; the universe is revealing itself in ways we have never imagined before."

So the whole thing is kind of stunning.  It leaves me yearning for more.  I mean, think of it; a hundred years ago, we didn't know about any of this stuff.  Five hundred years ago, we had no idea what the brain did, what matter was made of, and we still believed that the stars were pinpricks of light all equidistant from the Earth (which was, of course, at the center of the universe).

Considering what we could do in the next hundred years absolutely boggles the mind.