Barbara McClintock is one of the most inspiring figures in the history of biology.  She received her Ph.D. in Botany from Cornell University in 1927 -- in a time when few women chose to go to college, even fewer pursued a major in the sciences, and almost none made it all the way to doctoral-level work.

In the 1940s and 1950s, she was studying the genetics of maize, especially how genes regulate the expression of seed color in multicolored "Indian corn."  What she found, she said, could only be explained if the genes were moving around within the genome -- altering expression because of shifting position.  When she published preliminary papers on the topic, her discovery was derided as "jumping genes," and no one much paid attention.  This led to her decision to stop seeking publication in 1953. 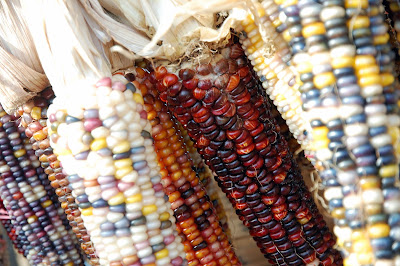 What it didn't do was to slow down her determination to continue her research.  She doggedly pursued her idea -- genetic transposition -- and finally had amassed so much evidence in its favor that the scientific establishment had to pay attention.  "Jumping genes" were a fact -- and in fact, have been found in every species studied -- and the phenomenon of transposition turns out to be a major factor in gene expression across the board.

The discovery, and the body of work that led up to it, earned McClintock the Nobel Prize in Physiology and Medicine in 1983 -- and to this day she is the only woman who has earned an unshared Nobel in that category.

Barbara McClintock died in 1992 at the age of ninety.  So it's unfortunate that she didn't live long enough to learn that not only to genes move around within the genome of an organism...

... they can jump from organism to organism.

Called horizontal transfer, this was initially thought to occur only in bacteria, where it helps them to avoid the bane of asexually-reproducing species, "Muller's Ratchet."  Since in asexual species, the DNA doesn't combine -- i.e., the offspring are clones -- mutations tend to accrue each time the DNA replicates, because replication isn't 100% faithful (it's pretty damn good, but not perfect).  You can think of it as a genetic game of Telephone; each copying process results in errors, and after a few generations, the DNA would be turned into nonsense (it's called a "ratchet" because like the mechanical device, it only goes one way -- in this case, toward converting the DNA into garbage).  But if horizontal transfer occurs, bacteria can pick up extra working copies of genes from their friends, meaning that if Muller's Ratchet knocks out a gene, chances are they have another version of it hanging around somewhere.

What no one realized is that like genetic transposition, horizontal transfer turns out to be ubiquitous.  And in a new paper out of the University of Adelaide, geneticists Atma M. Ivancevic, R. Daniel Kortschak, Terry Bertozzi, and David L. Adelson have shown that horizontal transfer is not only everywhere you look, it also is a major driver for evolution.

Transposable elements (TEs) are mobile DNA sequences, colloquially known as jumping genes because of their ability to replicate to new genomic locations.  TEs can jump between organisms or species when given a vector of transfer, such as a tick or virus, in a process known as horizontal transfer. Here, we propose that LINE-1 (L1) and Bovine-B (BovB), the two most abundant TE families in mammals, were initially introduced as foreign DNA via ancient horizontal transfer events.

Using analyses of 759 plant, fungal and animal genomes, we identify multiple possible L1 horizontal transfer events in eukaryotic species, primarily involving Tx-like L1s in marine eukaryotes.  We also extend the BovB paradigm by increasing the number of estimated transfer events compared to previous studies, finding new parasite vectors of transfer such as bed bug, leech and locust, and BovB occurrences in new lineages such as bat and frog.  Given that these transposable elements have colonised more than half of the genome sequence in today’s mammals, our results support a role for horizontal transfer in causing long-term genomic change in new host organisms.

Which I find simultaneously fascinating and creepy.  That a mosquito bite could not only make me itch, but inject into me the DNA of another species -- which then would colonize my own DNA, like some kind of molecular virus -- is seriously bizarre.

"Jumping genes, properly called retrotransposons, copy and paste themselves around genomes, and in genomes of other species," said project leader David Adelson in a press release from the University of Adelaide.  "How they do this is not yet known although insects like ticks or mosquitoes or possibly viruses may be involved – it’s still a big puzzle...  Think of a jumping gene as a parasite.  What’s in the DNA is not so important – it’s the fact that they introduce themselves into other genomes and cause disruption of genes and how they are regulated...  We think the entry of L1s into the mammalian genome was a key driver of the rapid evolution of mammals over the past 100 million years."

So much of what's in "your" genome probably wasn't originally yours, or necessarily even originally human.  Kind of humbling, isn't it?  But I better go wrap this up, because I've got a mosquito bite that's itching like hell.  I'm just hoping that mosquito hadn't bitten a rabbit previously, because the last thing I need is to have a sudden craving for carrots.  I freakin' hate carrots.