Given the ongoing lunacy happening in the United States right now, I find it strangely comforting when I find out that there are people doing stupid stuff in other countries, too.

Take, for example, the Korean radioactive mattresses.  As reported in the Korea JoongAng Daily, it turns out that seven mattress manufacturers have been found in violation of standards for allowable radiation level in products meant for human use.

How, you might ask, could not one, nor two, but seven companies be simultaneously producing mattresses that bathe you in the warm glow of alpha radiation?  Turns out that there's a pseudoscientific alt-med belief over there that anything producing negative ions is good for you (meaning, of course, that positive ions are bad).  Given that bases have an excess of hydroxyl (OH-) ions, if this were true it would mean that a concentrated solution of Drano would be just the most healthful thing ever.

But little things like "facts" and "science" never dissuade people from espousing this sort of idea, so these mattress manufacturers decided to negative-ionify their mattresses by sprinkling the stuffing with powdered monazite.  Monazite, for you non-geological types, is a mineral primarily composed of cerium/thorium phosphate.

Thorium, you probably know, is highly radioactive.  When it decays, it not only produces alpha particles, but the "decay series" ends up producing the element radon, which is not only more radioactive, is a gas, so it can be inhaled -- and has been linked to increasing your risk of lung cancer.

So using one of these mattresses is taking the chance of seriously compromising your health.  It will not, unfortunately, result in your getting superpowers or becoming the Korean version of the Incredible Hulk.

Then we've got the resort town of Naftalan, in Azerbaijan, which has a spa in which you can do wonderful things for your skin -- by taking a bath in heated crude oil.

At this point, I feel obliged to state outright that I'm not making either of these stories up.  The people running the resort said, "It smells like sulfur, but feels like salvation," and that it's helpful for skin, joint, and bone diseases.

One puzzling thing is that the news story I linked above says that "The oil's effectiveness is credited to its high concentration of a compound used to treat conditions like psoriasis and eczema.  European Union and U.S. regulators have deemed that compound a potential carcinogen, but it hasn't been linked to cancer."

Um.  It's a potential carcinogen, but hasn't been linked to cancer?  This is a little like saying that Donald Trump has been doing everything he can to favor Russian interests over those of Americans, but he's not actually pro-Russian and anti-American.

Oh, wait.  That's what he and his cronies are actually saying. 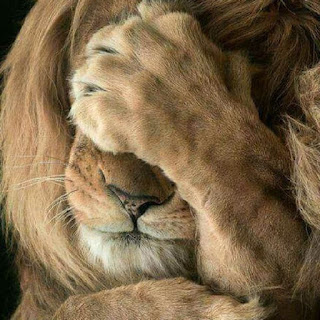 This kind of bullshit even makes the wildlife facepalm.

On second thought, I'm not sure how reassuring it really is that people elsewhere in the world are exhibiting the same level of credulous idiocy we have here in the United States.  Wouldn't it nice if somewhere in the world, there was a country that based its decisions on rationality, that behaved nicely toward people and respected their rights, and that took into account long-term consequences instead of basing everything on short-term expediency?  Maybe the fact that we're all in the same slowly-sinking boat isn't really a cause for celebration.

In fact, now that I'm thoroughly depressed, I think I'll go take a nap.  Maybe I'll get lucky and my mattress will emit gamma rays, and I'll get superpowers.  Maybe I'll get to fly and shoot laser beams from my eyes.  That'd be handy.

Especially before the next "Make America Great Again" rally.

This week's book recommendation is from one of my favorite writers and documentary producers, Irish science historian James Burke.  Burke became famous for his series Connections, in which he explored the one-thing-leads-to-another phenomenon which led to so many pivotal discoveries -- if you've seen any of the episodes of Connections, you'll know what I mean when I say that it is just tremendous fun to watch how this man's brain works.  In his book The Pinball Effect, Burke investigates the role of serendipity -- resulting in another tremendously entertaining and illuminating read.

Posted by Gordon Bonnet at 6:41 AM