Throw a war, nobody comes

Let's see... Fourth of July.  What shall I do today?  Picnic?  Barbecue?  Play with my dog?  Bonfire?  Go for a swim in my pond?  Shoot off some fireworks?

If this is the first you've heard about this, the same goes for me, and that's a little upsetting because I'm supposed to be participating in it, and evidently I missed the memo.  By this point, you probably won't be surprised to hear that the originator of this idea is none other than our friend and Skeptophilia frequent flyer Alex Jones, who had the following to say:


Here's the big announcement.  This July fourth, 2018, historically is the demarcation line.  You can mark as the point at which the global civil war against free humanity and pro-humanity, pro-Renaissance, classical liberal human future, versus the technocracy, the post-humanist, the post-industrialist, take-away-civilization eugenicists.  The Democrats are going to join with the real Nazis, that actually set Hitler up as a beta test -- that's on record -- posing as liberals.  You're either with the technocracy, with the human experimentists, or you're with the resistance.  It's much harder fixing things, and coming together, and believing in humanity, but we can do it, and we've done it, and Trump knows it.  It's about optimism, it's about a future.  We have everything we need, but it won't let the globalists be in total control any more.  No real competition.  So this is the choice you're getting.  July fourth is July fourth worldwide.  We've got to create some hashtags, get everyone involved, this is a time of not getting drunk, not eating a bunch of steaks or whatever.   That's a side issue.  We need to understand there's a global take down of nation states, a global takedown of populations, there is an attempt to get us all at each other's throats, by megabanks who are exempt from everything they're doing.  We have to get out that this is the beginning of a worldwide movement against empires, against royalty, against above-the-law bankers, against them all.  And it's a planetary awakening, 1776 worldwide.  It doesn't mean US control, it doesn't mean... uhhhhh... uhhhhh... no, it means the opposite.  It's soft power.  It's the next level of the Renaissance.... So this July fourth... uhhhhh.... how many years has it been since 1776?  Is it almost 250?  245 years?  Is t 245 years?  242.  I'm just going off the top of my head.  242...  You can mark this moment, July fourth, 242 years later, as the moment everyone will have to pick a side, whether you'll be a conformist with your own destruction, a conformist with the de-industrialization, the post-industrial world of the eugenicists, whether you're going to be strong and stand up to their bullying, stand up to the media, speak out for yourself, be involved, and be on Team Humanity.

Okay, that just leaves me with a few questions:
The thing that pisses me off the most about all this is that here I am, a fairly left-leaning guy, and there's going to be a Civil War waged by the left, and no one told me.  I mean, I signed up for #LiberalCivilWarTextAlerts and everything, and... nada.  I could have gotten out my musket and polished my bayonet and all, had my uniform dry-cleaned, and stored up some pemmican and beef jerky so I could survive the winter, and here I've been sitting on my ass drinking coffee and deciding how much potato salad to make.

How the hell am I supposed to wage a good war on the side of my Imperialist Eugenicist Post-Industrialist Above-the Law brethren if I only find out I'm involved the day it starts?

I swear, it's enough to make a guy think Alex Jones is pulling all this stuff out of his ass, or something. 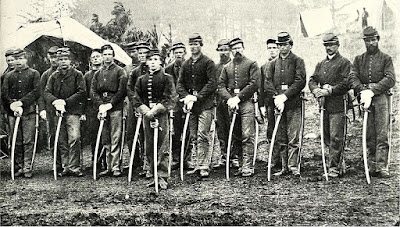 Anyhow.  I'm pretty discouraged by this.  In fact, I'm pissed off enough that I think I might just sit this one out.  If the Super-evil Globalists can't even be bothered to let all of their Liberal Cronies know what they're planning, fuck 'em.  I'm just going to go with my original plan to go for a swim, play with my dog, and have a bonfire.

But when tomorrow comes, and everything is still pretty much loping along as it always has, there will be one thing we can count on; Alex Jones will never admit that he was wrong.  Just like he's been all the other times he's predicted that the Democrats were going to launch a war to end humanity.