Alien vs. moose vs. cameraman

Some friends of mine went on a long backpacking excursion in the Grand Tetons a few years ago.  This couple was (at that point) in their forties, and both strong, fit, and energetic.  They were seasoned hikers who had twenty years' worth of wilderness experience.

Still, they were finding the Tetons a challenge.  Steep, rocky terrain and the desert heat were taking their toll.  And one day they were trudging wearily uphill, each wearing 35-pound packs, legs aching, when they heard a sound.

Both turned.  And running -- no, sprinting -- up the trail was an elderly man of perhaps 75.  Going all out, legs pumping, arms swinging.

And my buddy thought, "Criminy.  Look at that old dude.  Here we are, plodding along like senior citizens, and this guy is running up the trail like it's nothing."

His bemusement turned to mystification when the old guy caught up to them, grabbed them both by the shirt sleeves, and pulled them off the trail and behind a rock outcropping.

My friend said, "What the fuck?"

The old man, gasping for breath, jerked a thumb back toward the trail, so my friend peered around the rock outcropping.  And running full-tilt up the trail was...

Have you ever seen a moose?  They're huge.  No, not huge.  Humongous.  An average full-grown bull moose weighs 1,200 pounds.  That's an average one.  There was one shot by a hunter in the Yukon that weighed 1,800 pounds.  They can stand seven feet high at the shoulder, with a rack of antlers six feet across.

And they're aggressive.  Given (very little) provocation, moose will charge you, then take one of those enormous hooves and attempt to pound you into hamburger.

As the old guy found out.  My friend whispered, "All right, what did you do to piss off the moose?"

The old guy said, "I just took his picture."

It all ended happily enough.  Once they hid behind the rocks, the moose promptly forgot about them, and wandered off to look for other humans to vent its rage at, or failing that, helpless bunnies and squirrels to stomp.  As for the old dude, he probably regretted ever coming on this hike.  I'll bet he never again got more than five feet from his La-Z-Boy. 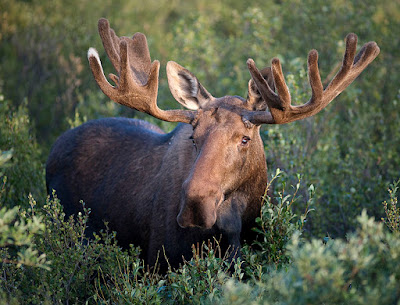 This all comes up because of a video that popped up on YouTube last week.  It was filmed in Gaspésie, Québec, and the claim is that some tourists stopped to video a moose, and ended up capturing a bipedal humanoid... something.  Take a look:


What strikes me about this video -- besides the fact that it has the obligatory out-of-focusness that all alleged paranormal videos have -- is the fact that here's this gray, skeletal, hollow-eyed guy dancing around next to a moose, and the moose doesn't respond.  "Ho hum," the moose seems to be saying.  "I'll ignore the flailing alien ten feet away from me, and focus on this nice grass by the side of the road."

This is definitely not typical moose behavior.  Typical moose behavior would be to scream, "Teleport this, motherfucker!" immediately before converting the alien into an alien pancake, then to turn toward the people in the car and shout, "Hey!  You!  Whadda you starin' at?  You want a piece of this?  Do you?"

So based on the moose's behavior, I'm thinking there's nothing there, and that it's some sort of video artifact... or possibly (gasp!) a hoax.

This didn't stop Sequoyah Kennedy, over at Mysterious Universe, from speculating that the thing might have been a Wendigo, the mythical creature common to the legends of many tribes of Algonquian origin.  The Wendigo is depicted as a skinny, creepy-looking guy with stringy hair that goes around eating people because he's been cursed to always be hungry and never able to satisfy his appetite.  Why he eats people and not something with more meat on them, e.g. moose, I'm not sure.  Maybe even the Wendigo doesn't dare to piss off a moose.

Which makes it even odder that here he would be, doing the macarena right next to one.  Although Kennedy admits that there's a more likely explanation, which is that it's a piece of a reflection from the inside of the car's windshield.  In fact, if you watch closely, you'll see that there's an odd pattern to the movement -- the guy's not holding the camera steady, and when he jitters it to the right, the creature moves a little to the left, and vice versa.

Exactly what would happen if it was a reflection.

I'm not completely convinced of this explanation, however, and I'm far from an expert in video analysis.  What I'm pretty sure of is that this isn't an alien or a woodland monster or whatever else people have been claiming.

Although I must admit that it's kind of creepy-looking.  It's hard to watch it without pareidolia taking over and convincing you that it's humanoid.  So who knows?  It could be real, I guess.  Maybe the moose and the creature are friends.  Maybe they like to collaborate in attacking humans.  Maybe the creature is saying, "Hey!  Moose!  Look over there!  Those guys aren't just taking your picture, like what happened to your Cousin Fred in the Grand Tetons.  They're videotaping you!"

Which could explain why the video is under a half a minute long.  Because at that point, the moose had enough and chased the people off down the road.

Damn presumptuous humans.  Always pointing and aiming cameras, when all moose want to do is have a nice snack and a chat with their dancing alien friends, or perhaps snort angrily and punt some innocent prairie dogs.  That'd also be in character.