Apathy, voting, and the lesser of evils

In further evidence that we've been transported from 2018 back to 1830, the Republican nominee for the North Carolina General Assembly (House District 48) has said -- direct quote -- that "God is a racist and a white supremacist."

His name is Russell Walker, and the only heartening thing about this story is that when his claims went public the North Carolina Republican Party immediately withdrew their support for him.  "Based on recent behavior and previous statements, the North Carolina Republican Party is unable and unwilling to support the Republican nominated candidate for North Carolina House District 48," GOP chairman Robin Hayes said in a statement Tuesday.  "The NCGOP along with our local parties in Hoke, Scotland and Robeson Counties will be spending our time and resources supporting Republican candidates that better reflect the values of our party." 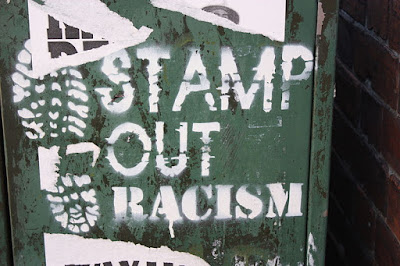 But I do mean that is the only heartening thing.  Walker beat his competitor, John Imaratto, carrying 65% of the vote in his district.  And it's not like the claims about the man are new, or that he's kept them under wraps, or anything.  (So the Republican Party's sudden disavowal of Walker has an unpleasant tang of "we knew all along, but once it became public knowledge and started to reflect poorly on us, we had to say we were against him.")  He runs a website that is rife with white supremacist ideology, wherein we can read passages like the following:

So yeah.  It's not like we're talking about subtle stuff, here.  Oh, and if we needed more, Walker's also an anti-vaxxer, too.  On his campaign website, he says that he is "convinced that vaccinations, especially for young children, create a favorable climate for Autism."

I find it profoundly baffling that here in the 21st century anyone can make statements like this without being shouted down, much less that someone like him could win the fucking nomination.  Look, I know that being a white guy, I'm bound to be less aware of racism than someone who has to deal with it day in, day out.  But for cryin' in the sink, I thought we'd come further than this.  Are we really in a place where 65% of the voters in a state district look at a man like this and think, "Yup, that's who I want to represent my views in the Assembly"?

Walker is facing Garland Pierce, an African American minister, in the general election in November.  Pierce is the incumbent, which makes me hopeful that Walker won't win.  But this is not the only race that's got some seriously eyebrow-raising candidates.  Bettina Rodriguez Aguilera is running in Florida to replace outgoing Representative Ileana Ros-Lehtinen in the 27th Congressional District, and... she says she's been on an alien spaceship.  And that the aliens have contacted her multiple times during her life.

"I went in," Rodriguez Aguilera told a reporter for The Miami Herald.  "There were some round seats that were there, and some quartz rocks that controlled the ship — not like airplanes."

Oh, and we have five convicted criminals running for Congress, too.  Those are:

C'mon, people, is this really the best you can do?

At this point, I can't give up on politics entirely, as much as I'd like to; I've never liked discussions over politics, because half of them seem to be about things that appear to me to be blitheringly obvious (like whether LGBTQ people should have the same rights as everyone else) and the other half about things that are completely unsolvable (like trying to balance the federal budget to everyone's satisfaction).

But I've been drawn into writing about politics because apathy seems to me to be completely unconscionable.  I still find it beyond appalling that 43% of Americans didn't vote in the 2016 presidential election.  That's 65 million people who went, "Meh," and stayed home.

And look where that's gotten us.

If we don't want idiots and crazy people running the show, we have got to table our apathy and get involved.  Political races should never require a choice between the lesser of evils.  Look, I don't care if you agree with me on how to govern the country, but I sincerely hope you agree that we want the best people we can find to be in charge.  If you differ from me on issues of policy, that's fine.  That, we can discuss.

But if you support a crazed white supremacist, or a delusional woman who thinks she's in contact with aliens, or a convicted criminal for public office -- I don't think we have any common ground whatsoever.