I got an email from a friend and long-time loyal reader of Skeptophilia last week, to the effect that I'd picked a hell of a time to take a vacation.  Along with the note, there was a link to a story about how Bigfoot erotica was projected to play a decisive role in a congressional race in Virginia.

Poor timing indeed.  If you didn't hear about this, the concise version is that Democrat Leslie Cockburn took a shot at Republican Denver Riggleman on (what else?) Twitter, to wit: "My opponent Denver Riggleman, running mate of Corey Stewart, was caught on camera campaigning with a white supremacist.  Now he has been exposed as a devotee of Bigfoot erotica.  This is not what we need on Capitol Hill."

The claim is debatable.  Riggleman did co-author books called Bigfoot Exterminators Inc.: The Partially Cautionary, Mostly True Tale of Monster Hunt 2006 and The Mating Habits of Bigfoot and Why Women Want Him.  The latter certainly sounds a little suspect, but Riggleman said it was intended for the humor value only.

"I didn’t know there was Bigfoot erotica, even with all my Bigfoot studies," Riggleman said.  "I thought this was such a joke that nobody would ever be dumb enough to think that this was real, but I guess her campaign did." 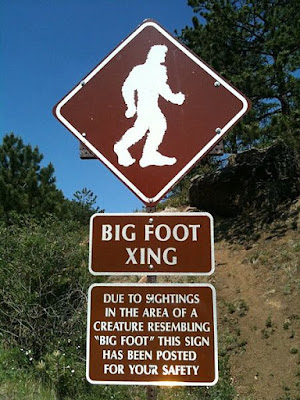 The relevance to the race is also dubious; even if Riggleman is turned on by Bigfoot (or writes stories for people who are), it really has no impact on his ability to craft law.  My own contention is that the vast majority of us have odd proclivities in the sex department that we'd much prefer the public didn't find out about, and despite that, most of us are pretty nice, responsible people.

So why Cockburn is harping on this, and not on the fact that Riggleman allegedly has ties to white supremacists, I have no idea.  That is important.  Any shaggy shagging is inconsequential by comparison.

This is all background, however, because yesterday my friend emailed me with a second link and the message, "It's not too late!!!"  The gist of this story, which hit the Los Angeles Times a couple of days ago, is that the sniping between Riggleman and Cockburn has led to a spike of sales of Bigfoot erotica on Amazon.

I'm not making this up.  According to the story on the phenomenon:

And no, I didn't make that up, either.

What does worry me, however, is the effect the research for this post is having on my Google search history.  It's already bad enough; being a writer of paranormal fiction (including a line of murder mysteries), I've probably already got a file three inches thick with the FBI.  (Recent searches: "How long after a body is buried can you tell if the person was poisoned by an opiate?" and "If someone is shot with a compound bow, would the arrow embed or go right through their body?")  So now the FBI will have a whole new angle to investigate, namely, if my fixation on cryptozoology has a decidedly more (shall we say) intimate motivation.

About which, allow me to assure you, it does not.  Eight-foot-tall hairy proto-hominids are not my thing.

Nor is the Loch Ness Monster.  Just to clear that up as well.  Although in the interest of honesty, one of my books does have a scene with a guy having sex with a Japanese fox spirit, resulting in unfortunate consequences for all concerned.  But I didn't write it because it turned me on, it's because it was critical to the plot.

Anyhow, that'll teach me to take two weeks off.  I'm just glad that the story progressed in such a fashion that I could write about it without being hopelessly behind the times.  And now, I'm heading off to do some writing.  Today's search: "How low does a person's blood pressure have to drop before they lose consciousness?"  Hope the FBI agent assigned to me isn't disappointed at the fact that this one is only about killing people, not about kinky sex.