Life isn't always smooth sailing, for me or for anyone else, but I'm thankful that I've never had to deal with a "duppy."

If you don't know what a duppy is, well, neither did I before yesterday.  Turns out it's a malevolent spirit of Jamaican origin.  After doing a bit of research, I found that the name comes from the Ga language of Ghana, where adope means "a spirit that appears in the shape of a dwarf."  In the tradition of Obeah -- a West Indian folk religion, originally of West African origin -- humans are born with two souls, a good one and a bad one.  When you die, your good soul goes to heaven to be judged, and the bad one stays in your coffin for three days, at which point it dies.  But if in those three days proper precautions aren't taken, the bad soul will escape and become a duppy, and go around causing problems.

The problem is, I couldn't find anywhere that told me what the proper precautions were.  So that's unfortunate.  I mean, they shouldn't be coy about this stuff, or we'll have the bad souls of Grandma Bertha and Great-Uncle Edmund and everyone else wandering about making people's lives miserable.

And heaven knows we wouldn't want that. 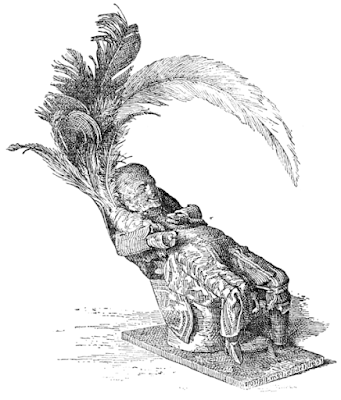 Woodcut of an "Obeah Man" from the journal Folk-Lore: A Quarterly Review of Myth, Tradition, Institution & Custom, volume 4. 1893.  Published in London by the Folk-lore Society.  [Image is in the Public Domain]

There are other kinds of duppies, though, as if one kind weren't enough.  There's one called the "Rolling Calf," which is a calf that rolls (thus the name) because its body is completely wrapped up with chains.  How that helps it roll I'm not sure, but you can see how that would make other sorts of movement pretty much out of the question.  There's also the "Three-Footed Horse" (once again, self-explanatory), and "Old Higue," a vampiric spirit that looks like a sweet little old lady by day, and a loathsome bloodsucking hag at night.

I think this might well explain the personality of my seventh-grade English teacher.  There always did seem to be something kind of cunning behind her smile.

The reason all this comes up is an article that appeared in The Jamaica Star a couple of weeks ago about an elderly husband and wife in St. Andrew, Jamaica, who say they're being tormented by a duppy.  The author of the article, Simone Morgan Lindo, seems to take the whole thing seriously, and quotes the old lady, Eulalee Mills, extensively.  Here's what Mills had to say.  (Note: the newspaper quoted her in Jamaican patois; I'm merely copying it here.  I say that so I don't have to write [sic] every other word.)

I was in my room and I had some things on my microwave and I just see the dem fly off.  I took them up back and pack them up but as me turn and a go in the next room, me hear the same tings dem drop off again...  The next day everything start fling from my chest of drawers and tings just start throw from all over the room.  Everything up in the air, all me medication and me blood pressure machine deh all over the place and tings just start 'lick' me inna me back and all over mi body.  Me and me husband stand up in our room and all things from the kitchen a sail come in come lick we.

So that's pretty scary.  Her husband Milford, though, was not about to let some disembodied spirit throw around their belongings.


As soon as me rebuke the 'spirit' and stepped out the room, it start act up back again and start sail tings...  I know dem spirits deh can't trouble me, enuh, because me is one of God's bad man, so me a go continue rebuke them.  The rest a people dem in the house no have the spiritual power to fight dem, but me nah stop until me house get calm back.

Which is pretty damn brave.  I know I'm a skeptic and all, but I have to say, if I was sitting in my house minding my own business and my blood pressure medication suddenly started flying through the air, rebuking would kind of be the last thing I would think of.  I think my more likely response would be to piss my pants and then have a stroke.  Because I may be a rationalist, but I'm also a big fat coward.

Interestingly, the Mills' neighbors aren't quite so certain Milford Mills is on the right side of things.  One neighbor, who didn't want to be named, said that Mills was a practitioner of Obeah who was just getting what he deserved.  Another said that (s)he had seen a female spirit walking in the Mills' yard at night, and it was the ghost of a woman with whom Milford Mills had an illicit relationship.

I hope the whole thing settles down soon, not only so Eulalee and Milford get the calm they want, but because bad stuff happens when superstitious people are feeling threatened.  If the neighbors start thinking Milford and his wife are a danger to the safety of the community, they might take matters into their own hands.  Just last year, it was reported that a bunch of homeless children in Uige, Angola were tortured -- and some were killed -- because the locals had become convinced they were witches.  That sort of thing appears to be fairly common in the world, which I find appalling.

But so far, no one's bothered the Mills, and there were no more recent reports of their belongings being thrown about.  So that's all good.  As for me, if there are duppies around here, I'd be much obliged if they'd stay out of my house.  My housekeeping skills are already such that they could be summed up by the statement, "There appears to have been a struggle."  The last thing I need is a ghost adding to the chaos.