Past experiences in my life have instilled into me a deep dislike of being the center of attention.  Talking about what you love, what you're interested in, is arrogance and conceit -- I learned that lesson early.  Also, protect what you care about, or it'll be ridiculed, demeaned, or taken away.  The result was that even in safe situations, I have always been afraid to open up, and even people I've known for years really hardly know me at all.

The fact that I no longer have to spend my life in a protective crouch has not eradicated that fear.  It's a significant part of why I'm as shy and socially awkward as I am, and why I'm the guy at parties (if I get invited in the first place) who's standing there with a glass of scotch, looking around frantically for a dog to socialize with.  I've tried for years to be okay with graciously accepting compliments when they come, and to open up to others about my interests, but to say it doesn't come naturally to me is a wild understatement.

This all comes up because of some research released last month from scientists at the RIKEN Center for Brain Science in Saitama, Japan.  A team consisting of Ray Luo, Akira Uematsu, Adam Weitemier, Luca Aquili, Jenny Koivumaa, Thomas J.McHugh, and Joshua P. Johansen published a paper in Nature: Communications called "A Dopaminergic Switch for Fear to Safety Transitions," wherein we find out that a single neurotransmitter (dopamine) acting in a single part of the brain (the ventral tegmental area) is apparently responsible for unlearning fear responses.


Exposure therapy, a form of extinction learning, is an important psychological treatment for anxiety disorders such as post-traumatic stress disorder (PTSD).  Extinction of classically conditioned fear responses is a model of exposure therapy.  In the laboratory, animals learn that a sensory stimulus predicts the occurrence of an aversive outcome through fear conditioning.  During extinction, the omission of an expected aversive event signals a transition from fear responding to safety.  To switch from fear responding to extinction learning, a brain system that recognizes when an expected aversive event does not occur is required.  While molecular changes occurring in the ventromedial prefrontal cortex (vmPFC) and amygdala are known to be important for storing and consolidating extinction memories, the brain mechanisms for detecting when an expected aversive event did not occur and fear responses are no longer appropriate are less well understood...

Team leader Joshua Johansen was unequivocal about the potential for this research in treating long-term anxiety and PTSD.  "Pharmacologically targeting the dopamine system will likely be an effective therapy for psychiatric conditions such as anxiety disorders when combined with clinically proven behavioral treatments such as exposure therapy," he said in a press release from RIKEN.  "In order to provide effective, mechanism-based treatments for these conditions, future pre-clinical work will need to use molecular strategies that can separately target these distinct dopamine cell populations." 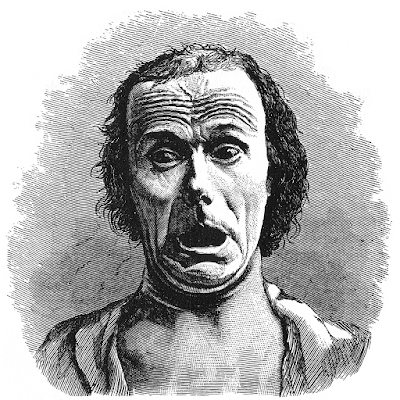 Illustration from Charles Darwin's Expression of the Emotions in Man and Animals (1872), captioned, "Terror, from a photograph by Dr. Duchenne."  [Image is in the Public Domain]

I have suffered from serious anxiety most of my life, and I have a dear friend who has PTSD, and believe me -- this is welcome news.  My one attempt to use an anxiolytic medication was a failure (it killed my appetite, which someone with as fast a metabolism as I have definitely doesn't need), and "exposure therapy" has, all in all, been a failure.  The idea that there could be a way to approach these debilitating conditions by targeting a specific molecule in a specific part of the brain is pretty earthshattering.

I know it's a long way between identifying the brain pathway involved in a disorder and finding a way to alter what it's doing, but this is a significant first step.  The idea that I might one day be able to go to social gatherings without feeling a sense of dread, and to talk to people rather than just dogs, is kind of amazing.  Until that happens, I'm probably still going to have to deal with my anxiety, but it's nice to know someone is working on the problem.