Looking for LTR with a guy who is sexy, handsome, athletic, and dead

A loyal reader sent me an email yesterday that said, "Dude.  You think it's weird that there are people who want to get hot & heavy with Bigfoot.  Check this out."

The reference, of course, was last week's post about Bigfoot erotica, which, tolerant guy though I am, left me feeling a little incredulous.  So as you might imagine, I could barely wait to click on the link, which brought me to an article by Paul Seaburn over at Mysterious Universe...

... about a woman who is trying to have a baby with a ghost.

I am not making this up, although she clearly is.  I mean, no one would be happier than me to find out we get to have sex in the afterlife, but realistically speaking it seems pretty unlikely.  If there's an afterlife at all, and at the moment I'm even a little dubious about that.

The woman's name is Amethyst Realm (I'm still not making this up), and she lives in Bristol, England.  Last year she apparently gave up trying to hook up with flesh-and-blood guys, and put an ad on OKCupid, specifying her preference for a lover as "deceased."  At least that's what I'm assuming she did, because last year she claims she had sex with twenty different ghostly men.

The first time kind of caught her by surprise.  After ditching her previous (live) boyfriend for being away too much, Amethyst Realm decided to go for a long walk.  "One day, while I was walking through the bush, enjoying nature, I suddenly felt this incredible energy," she says.  "I knew a lover had arrived."

What happened then is what any of us would do, provided we had a screw loose; she got naked right there in the underbrush and did the horizontal tango with her invisible friend.  She had repeated hookups with this particular ghost -- and then did some comparison shopping.  I guess there's no chance of catching an STD from a ghost since they're already dead, so if spectral sex rings her bell, more power to her.

But then she decided it was so good that she had to take the next step -- namely, getting pregnant.

"It’s pretty serious," Amethyst Realm says.  "In fact, we’ve even been thinking about having a ghost baby.  I know that sounds crazy but I’ve been looking into it and I don’t think it’s totally out of the question."

It should be a relief, I guess, that at least she knows it sounds crazy.

This does bring up some questions, however.
Of course, it bears mention that the idea isn't new.  The tradition of incubi and succubi goes back to the Middle Ages -- the former are male demons who take advantage of sleeping women (the name comes from the Latin verb incubare, "to lie on top of"), and the latter female demons who do the same to sleeping men (from succubare, "to lie underneath").  (Being visited by a succubus was one explanation given to young male adults getting wet dreams, when the actual explanation is that young male adults are so perpetually horny that they can go from zero to orgasm in ten seconds flat even when they are technically unconscious.) 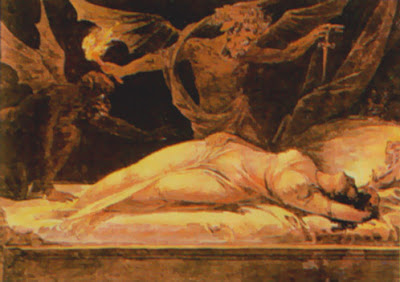 Incubus by Charles Walker (1870) [Image is in the Public Domain]

So Amethyst Realm didn't come up with the concept, but there's no doubt that she's enjoying it.  Which, I suppose, puts it into the "If It Makes You Happy" department.

However, I hope this is the last time I get sent a link about people having paranormal sexual experiences.  I guess chacun à son goût and all that sorta stuff, but myself, I prefer that my lovers are (1) human, and (2) alive.  If that makes me narrow-minded, I guess that's the way it is.

Oh, one more thing.  Amethyst Realm might want to consider adopting a different name if she's serious about finding a nice ghost to settle down with, because her current one sounds like one of the worlds from Super Mario Brothers.  If I was a ghost looking for a LTR, I don't think I could take someone named "Amethyst Realm" seriously, however determined she was to get into my, um, shroud.

Posted by Gordon Bonnet at 4:52 AM