There's a stereotype that science nerds, and especially science fiction nerds, are hopeless in the romance department.

I'd sort of accepted this without question despite being one myself, and being happily married to a wonderful woman.  Of course, truth be told, said wonderful woman pretty much had to tackle me to get me to realize she was, in fact, interested in me, because I'm just that clueless when someone is flirting with me.  But still.  Eventually the light bulb appeared over my head, and we've been a couple ever since.

Or so I thought, till I read a study by Stephanie C. Stern, Brianne Robbins, Jessica E. Black, and, Jennifer L. Barnes that appeared in the journal Psychology of Aesthetics, Creativity, and the Arts last month, entitled, "What You Read and What You Believe: Genre Exposure and Beliefs About Relationships."  And therein we find a surprising result.

Exactly the opposite is true.  We sci-fi/fantasy nerds make better lovers.

Who knew?  Not me, for sure, because I still think I'm kind of clueless, frankly.  But here's what the authors have to say:


Research has shown that exposure to specific fiction genres is associated with theory of mind and attitudes toward gender roles and sexual behavior; however, relatively little research has investigated the relationship between exposure to written fiction and beliefs about relationships, a variable known to relate to relationship quality in the real world.  Here, participants were asked to complete both the Genre Familiarity Test, an author recognition test that assesses prior exposure to seven different written fiction genres, and the Relationship Belief Inventory, a measure that assesses the degree to which participants hold five unrealistic and destructive beliefs about the way that romantic relationships should work.  After controlling for personality, gender, age, and exposure to other genres, three genres were found to be significantly correlated with different relationship beliefs.  Individuals who scored higher on exposure to classics were less likely to believe that disagreement is destructive.  Science fiction/fantasy readers were also less likely to support the belief that disagreement is destructive, as well as the belief that partners cannot change, the belief that sexes are different, and the belief that mindreading is expected in relationships.  In contrast, prior exposure to the romance genre was positively correlated with the belief that the sexes are different, but not with any other subscale of the Relationships Belief Inventory.

Get that?  Of the genres tested, the sci-fi/fantasy readers score the best on metrics that predict good relationship quality.  So yeah: go nerds.

As Tom Jacobs wrote about the research in The Pacific Standard, "[T]he cliché of fans of these genres being lonely geeks is clearly mistaken.  No doubt they have difficulties with relationships like everyone else.  But it apparently helps to have J.R.R. Tolkien or George R.R. Martin as your unofficial couples counselor."

Tolkien?  Okay.  Aragorn and Arwen, Celeborn and Galadriel, even Sam Gamgee and Rose Cotton -- all romances to warm the heart.  But George R. R. Martin?  Not so sure if I want the guy who crafted Joffrey Baratheon's family tree to give me advice about who to hook up with.

One other thing I've always wondered, though, is how book covers affect our expectations. I mean, look at your typical romance, which shows a gorgeous woman wearing a dress from the Merciful-Heavens-How-Does-That-Stay-Up school of haute couture, being seduced by a gorgeous shirtless guy with a smoldering expression who exudes so much testosterone that small children go through puberty just by walking past him.  Now, I don't know about you, but no one I know actually looks like that.  I mean, I think the people I know are nice enough looking, but Sir Dirk Hotbody and Lady Viola de Cleevauge we're not.

Of course, high fantasy isn't much better.  There, the hero always has abs you could crack a walnut against, and is raising the Magic Sword of Wizardry aloft with arms that give you the impression he works out by bench pressing Volkswagens.  The female protagonists usually are equally well-endowed, sometimes hiding the fact that they have bodily proportions that are anatomically impossible by being portrayed with pointed ears and slanted eyes, informing us that they're actually Elves, so all bets are off, extreme-sexiness-wise. 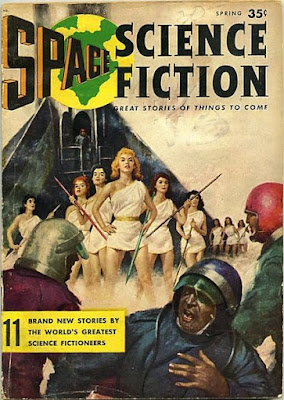 Being chased by a horde of Amazon Space Women in Togas isn't exactly realistic, honestly. [Image is in the Public Domain]

So even if we sci-fi nerds have a better grasp on reality as it pertains to relationships in general, you have to wonder how it affects our bodily images.  Like we need more to feel bad about in that regard; between Victoria's Secret and Abercrombie & Fitch, it's a wonder that any of us are willing to go to the mall without wearing a burqa.

But anyhow, that's the latest from the world of psychology.  Me, I find it fairly encouraging that the scientifically-minded are successful at romance.  It means we have a higher likelihood of procreating, and heaven knows we need more smart people in the world these days.  It's also nice to see a stereotype shattered.  After all, as Oliver Wendell Holmes said, "No generalization is worth a damn.  Including this one."