When I'm teaching the unit on evolution in my biology classes, one of the hardest ideas to expunge from my students' brains is that evolution is goal-oriented.

Take, for example, the worn-out example, used in every seventh-grade life science textbook, about giraffes' long necks.  Why do they have these outlandish proportions?

So they can reach food higher up in trees, of course.

The subtle error here is that it implies that a bunch of short-necked giraffes were standing around on the African savanna, looking longingly up at the tempting foliage higher up, and one said, "Dude.  It'd be nice if we could reach higher, don't you think?"  And another said, "Well, we're kinda screwed, because we're short.  But if we had longer-necked kids, that'd be cool, yeah?"

The other giraffes agreed, and lo, they had long-necked kids. 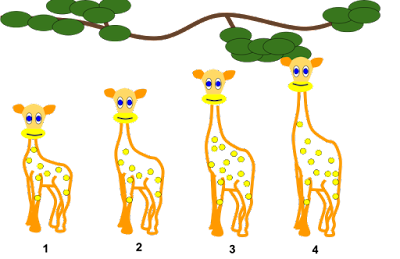 Okay, I'm oversimplifying, here, but the gist is correct.  The assumption of goal-orientation puts the cart before the horse; that there was some sort of end product evolution had in mind, so organisms headed that way.  Of course, the truth is both simpler and more complex.  What Darwin actually said was that organisms vary from some other cause (being pre-Mendel, he didn't know about genes and mutations), and the environment selects the ones that work the best.  The others die off, taking their deleterious genes with them.

The ultimate in goal-orientation, of course, is strict creationism, which posits a designer who created everything as it currently is.  The immediate problem with this -- besides the fact that there's no evidence for it whatsoever -- is that there are a lot of things that seem, well, poorly designed.  The creationists are fond of trotting out some examples of complex structures that work pretty well (such as the eye) and conveniently ignore some examples of seriously poor design (such as the male urinary/reproductive system, which routes the urethra through the prostate gland, making a lot of older guys seriously unhappy).

All of this goal-orientation is known to philosophers as "teleological thinking" -- the attribution of a final cause or goal in natural processes.  And just last week, a paper came out of some research in France that suggests teleological thinking as a commonality between creationism... and conspiracy theories.

The results are perhaps not terribly surprising, although I don't know if anyone previously has linked them this way.  Both creationism and conspiracy theories imply a belief in a Grand Plan -- benevolent in the case of creationism, malevolent in the case of conspiracy theories.  Adherents to either tend to be repelled by the idea of chaos, that things just happen because they happen.  (Thus "even when bad things happen, God has a plan" from the former, and the steadfast refusal by the latter to believe that any unpleasant event might just be random bad luck.)

I'd add one more piece to this, however, and that's the determination by both to avoid or explain away facts that contradict their favorite model of how the universe works.  Of course, that unites them with some other groups that aren't necessarily thinking teleologically, such as the anti-vaxxers.

Although the anti-vaxxers tend to believe that there's a huge coverup by "Big Pharma" of the horrific side effects of vaccination, so maybe there's some overlap there, too.

Anyhow, I thought the whole thing was interesting.  And it does bear mention that the students who are the most repelled by evolution for non-religious reasons tend to be the ones who hate the idea that so much of the world could be the result of randomness.  How can the biodiversity on the Earth, with all of its "endless forms most beautiful and most wonderful" (to quote Darwin), be produced by chance mutations?

Of course, the universe is not compelled to be organized in such a way that it makes you comfortable.  The evidence is very much in favor of the idea that mutations plus selection have generated all of the life forms you see around you.  And since selection is a "whatever works" sort of process, it's unsurprising that sometimes it creates designs of dubious logic -- such as the urethra/prostate situation I mentioned above, which a friend of mine calls "routing a sewer pipe through a playground."