The problem with tradition

It is a frequent source of bafflement to me that so many people don't change what they do when confronted with incontrovertible evidence that there's a better way.

Sad to say, the educational establishment is one of the worst in this regard.  For example, it's been known (or at least, strongly supported) that a person's facility for learning a second language drops off significantly after puberty since 1967, when the research of linguist and neuroscientist Eric Lenneberg showed that the brain's plasticity with regard to language more or less goes away after age 12.  So for fifty years we've been pretty certain that the way to create bilinguals is by early immersion programs -- kindergarten or (better) preschool.

But how do we do it, fifty years later?  In my school district, which is forward-thinking in a lot of respects, we start teaching foreign language in grade seven.  I.e., we wait until the point that the human brain becomes really bad at it to start doing it.

When I tell my neuroscience students about this -- that if they had been put in an immersion program at age two, they could now speak whatever language they wanted, fluently, without once memorizing a conjugation table or vocabulary list -- they are pissed.

"Then why do we still do it this way?" they ask.

Good question.  "'Cuz it's the way we've always done it," is about the best I can do.  Which has got to be the crappiest justification for anything I can think of.

So my expectation is that the recent research done by Ethan Bernstein, Jesse Shore, and David Lazer, of (respectively) Harvard, Boston University, and Northeastern University, is going to impress a lot of people and have zero cumulative effect on how we approach anything.

Their paper, released last week in the Proceedings of the National Academy of Sciences, is called "How Intermittent Breaks in Interaction Improve Collective Intelligence," and it proposes a novel approach to problem-solving: giving people a chance to work together interspersed with solitary work periods enhances the quality of solutions generated.

It's kind of counter to how we've been taught to work, isn't it?  In school, we're mostly instructed to work alone, that working together is "cheating."  The emphasis is on solitary work... except for very controlled situations of "cooperative learning" that are all too often exercises in frustration for the best students, because the individuals who are the most concerned about learning the concepts or getting good grades (or, hopefully, both) are highly motivated to do the lion's share of the work, while the less-engaged students have no particular incentive to do more than the bare minimum.  If I can think of a single teaching strategy that I have heard more students rail against than any other, it's "cooperative learning."  I can't tell you how many times I've heard kids say, "I'd rather just do it myself and get my grade rather than doing it myself and then giving my grade to five other students who sat on their asses the entire time." 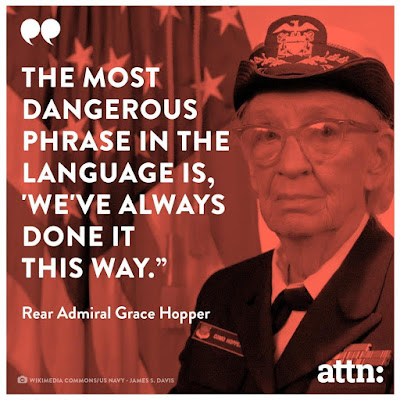 But if you want true creative problem-solving, the Bernstein et al. study suggests, having people work alone isn't the best way to do it.  Neither is the throw-them-together-for-hours, let's-beat-the-problem-to-death approach.  It works best to have them work together for a while, divide up the task -- then reconvene to compare notes and integrate what each of them has accomplished, evaluate it, see what else needs to be done... and repeat as many times as needed.  The researchers write:

People influence each other when they interact to solve problems.  Such social influence introduces both benefits (higher average solution quality due to exploitation of existing answers through social learning) and costs (lower maximum solution quality due to a reduction in individual exploration for novel answers) relative to independent problem solving.  In contrast to prior work, which has focused on how the presence and network structure of social influence affect performance, here we investigate the effects of time.  We show that when social influence is intermittent it provides the benefits of constant social influence without the costs...  Groups in the intermittent social-influence treatment found... optimum solution[s] frequently (like groups without influence) but had a high mean performance (like groups with constant influence); they learned from each other, while maintaining a high level of exploration.  Solutions improved most on rounds with social influence after a period of separation.

Even before reading this study, it's the approach I've recommended for years to my AP Biology students for writing up labs.  Each of the labs we do is focused around a single question, often one that is simple to ask but not so simple to answer.  For example, our first lab approaches the question of enzyme reaction rate.  In every introductory biology class, you learn that enzymes speed up chemical reactions.  Our first AP lab asks the question, "By what factor?"  Does a typical enzyme double the rate of a reaction?  Make it go ten times faster?  A hundred times?  A thousand?

The lab procedure is designed to give the students enough data to answer the question, but getting from the raw data to a defensible answer isn't simple.  So my students work in teams, and I recommend to them that they break the task up -- one member of the team does the calculations and graphs, one writes up the procedure, one organizes the data into tables or charts, and so on.  Then they should get together, and look at what they've got, and see if they can solve the problem -- use their work to come up with an answer as a team that they can then defend.

The problem is, there's no way I can mandate this approach, and I'm afraid that some groups still end up with one or two students doing pretty much all the work, and the others going along for the ride (and because of that, not really learning much from the experience).  I simply don't have the time to have them do the lab write-ups during class, so I can't supervise them and make sure they're working on it consistently and fairly.  But I know from experience -- and the Bernstein et al. paper supports this conclusion -- that they clearly learn the most if that's how they approach the task.

And the paper also has implications for the corporate world.  In problem-solving on the job, it would improve solution quality to use a hybrid approach of teamwork and solitary work.

You have to wonder why people don't look at something like this and think, "Let's at least try this and see if it works."  But habit and laziness keep us doing the same thing over and over, even when it's been demonstrated (over and over) that what we're doing doesn't work, or at least isn't optimal.

Maybe after 31 years of teaching, I'm getting cynical.  I hope that's not true, but I have to admit my first thought on reading this was, "Wow!  Cool!  This won't change anything!"  I seriously hope I'm wrong about that.  Because there's a lot of truth to the old adage that if you always do what you've always done, you'll always get what you've always got.