I don't know about you, but I'm confronted on a nearly daily basis with finding out that people have done things that seem entirely baffling.  I frequently find myself saying, "Who would do something like that?"  Or, more directly and simply, "What the fuck?"  Sometimes explaining human behavior seems like a losing proposition.

New research by Princeton University cognitive psychologist Simon Cullen has given us an interesting window into these moments, and a guardedly heartening view of how we see each other; humans in general tend to attribute good behavior to a person's "inner self" and true identity, and bad behavior to circumstance.

In other words, when we're good, it's agency, a reflection of who we are.  When we're bad... well, anyone in that situation might have responded that way. 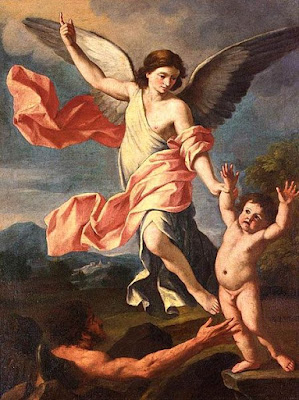 Giacinto Gimignani, An Angel and a Devil Fighting for the Soul of a Child (ca. 1640) [Image is in the Public Domain]

In his paper, "When Do Circumstances Excuse?  Moral Prejudices and Beliefs about the True Self Drive Preferences for Agency-Minimizing Explanation," which was published last week in the journal Cognition, Cullen writes:


When explaining human actions, people usually focus on a small subset of potential causes.  What leads us to prefer certain explanations for valenced actions over others?  The present studies indicate that our moral attitudes often predict our explanatory preferences far better than our beliefs about how causally sensitive actions are to features of the actor’s environment...  Taken together, these studies indicate that our explanatory preferences often reflect a powerful tendency to represent agents as possessing virtuous true selves.  Consequently, situation-focused explanations often appear salient because people resist attributing negatively valenced actions to the true self.  There is a person/situation distinction, but it is normative.

He demonstrated this using five studies that took a variety of angles on the question:
These results are both encouraging and discouraging.  Encouraging because we're not nearly as cynical about humanity as we often appear to be -- we honestly expect most humans to be good most of the time, when they are acting out of their core identity.  Discouraging, though, because it means that we're once again not evaluating behavior rationally, but making assumptions that everyone would act like we do if only they were in better circumstances.  (What Kathryn Schulz calls the tendency to believe that people we disagree with "don't have access to the same information that we do, and when we generously share that information with them, they're going to see the light and come on over to our team.")

"It’s a way to confuse how you believe the world should be with how the world is," Cullen said about this sort of assumption.  "That’s usually a bad thing to do.  It’s much better to figure out how the world is."

Which is it exactly, and not just in the realm of psychology.  It'd be nice if we could set aside our preconceived notions and evaluate the facts, both about each other and about the world.

But since Cullen's study shows that's what we already think we're doing, I'm not sure how we could begin to fix this.