If there's one thing that could be a microcosm of the current administration, it was a short exchange yesterday between Rudy Giuliani and Chuck Todd on NBC's Meet the Press.

Giuliani, who is acting as Donald Trump's lawyer, said, "When you tell me that, you know, [Trump] should testify because he’s going to tell the truth and he shouldn’t worry, well that’s so silly because it’s somebody’s version of the truth.  Not the truth."

You'd think Giuliani at this point would say, "That's not what I meant," or some other deflection, but no.  Amazingly, he replied, "No, no, it isn’t truth.  Truth isn’t truth.  The President of the United States says, 'I didn’t …'"

Lest you think Giuliani had an unguarded moment, or got cornered into misspeaking, this isn't the first time he's ventured into this territory.  Last week on CNN he took exception to Chris Cuomo's comment that "facts are not in the eye of the beholder."

"Yes, they are," Giuliani replied.  "Nowadays they are."

And in May, when Giuliani was being interviewed by the Washington Post on the topic of the Mueller investigation, he said, "They may have a different version of the truth than we have."

People have made fun of Giuliani over this -- in fact, yesterday Chuck Todd said about the "truth isn't truth" comment, "This is going to become a bad meme" -- but honestly, it encapsulates the Trump administration's entire approach.  Don't believe what anyone is telling you -- except me.  Doubt the facts and the fact-checkers.

Hell, doubt your own eyes.  Trump himself said, just last month, "Stick with us.  Don't believe the crap you see from these people, the fake news...  What you're seeing and what you're reading is not what's happening."

And the most frightening thing of all is that it's worked.  Last November, a CNN reporter interviewed a Trump supporter and asked about the allegations of collusion with Russia.  The man, Mark Lee, replied, "Let me tell you, if Jesus Christ got down off the cross and told me Trump is with Russia, I would tell him hold on a second, I need to check with the president if it’s true...  I love the guy."

Scared enough yet?  Let's add a quote from George Orwell's 1984 to bring the point home:

The party told you to reject the evidence of your eyes and ears.  It was their final, most essential command...  And if all others accepted the lie which the Party imposed—if all records told the same tale—then the lie passed into history and became truth.  'Who controls the past' ran the Party slogan, 'controls the future: who controls the present controls the past.'

And a lot of what he's accused of -- colluding with the Russians to skew elections, pandering to dictators, doing whatever it takes to use his position to fill his personal bank accounts -- okay, that's some pretty awful stuff.  But we've been through this kind of thing before.  Corruption in government is hardly a new thing; Watergate, Teapot Dome, the Whiskey Ring, JFK's use of his position to avoid consequences for his many affairs, Eisenhower's turning a blind eye to McCarthyism, the acceptance by more than one administration of the atrocities of dictators as long as they were pro-US -- government is not a clean affair at the best of times.

But this is a qualitatively different thing.  This is a president who can stand there and say one thing one day, the opposite the next -- and his spokespeople say he was right both times.

And his followers believe them. 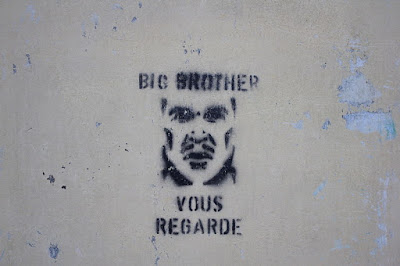 The fallout from scandals can take a while to clean up.  I was only twelve when the Watergate coverup was revealed, and I remember how it completely dominated the news, almost to the exclusion of everything else, for what seemed like years afterward.

But how do you fix this?  Orwell was right; once you convince people that everyone else is lying to them -- using state-controlled media (Fox News, anyone?) as the mouthpiece -- you can shortly thereafter have them believing that up is down and left is right.  They're effectively insulated from reality.  Much fun has been made of the whole "fake news" thing, but I'm not laughing; it's the scariest thing of all, and more so because the media themselves are complicit in it.  They played right into Trump's hands during the election, reporting every damnfool thing he said and every outrageous claim he made, because it got them viewers (and Trump, of course, ate it up; he lives for being in the spotlight, even if it's for saying something idiotic).  Skewed stories and biased reporting on both sides?  No problem as long as it kept people from changing the channel.

Reject the evidence of your eyes and ears.  It is the final, most essential command.

The only possible response sane people can have is to demand the truth.  Not just from our leaders,  but from the media, from political spokespeople... and from each other.  People like Giuliani should be laughed out of the building for saying things like "truth isn't truth," and should thereafter be denied the opportunity for subsequent interviews.  He's destroyed his own credibility; why should we listen further?

Of course, I don't really think that's going to happen, any more than the media shut off the microphones once it was established early in the election season that Donald Trump is constitutionally incapable of telling the truth.  But maybe if we stop tolerating lies -- if we start turning off the media that supports these people, and demanding fair, fact-based reporting -- that will get their attention.

To end with another quote from Orwell: "In a time of universal deceit, telling the truth becomes a revolutionary act."