Thanks to a loyal reader of Skeptophilia, I now know that apparently there is a growing number of people who believe that water is not H2O.

Unsurprisingly, if you created a Venn diagram between these people and the people who believe the Earth is flat, there'd be a large overlap.  So not only have the scientists been lying to us about the shape of the Earth, they've been lying to us about the nature of water.  Who knows what else they've been telling us that's wrong?  Maybe DNA is actually made of tiny bendy-straws.  Maybe the stars are  fireflies that landed on the hemispherical glass sky-dome that covers the (flat) Earth.  Maybe our brains actually aren't neural tissue, but a couple of pounds of banana pudding with crushed vanilla wafers mixed in.

I know that's what my brain feels like at the moment.

Note for the record that I am not here addressing a philosophical argument that was in vogue a few years ago about the "nature of water," that contended (with some justification) that because an individual H2O molecule did not have the properties we associate with water -- clarity, wetness, ability to dissolve stuff, and so on -- that H2O was, in fact, not water.  And that some things we call water (e.g. ocean water) are not pure H2O.

That was a discussion about how we use words, which is an important enough topic, although sometimes it gets pushed far enough that it seems to me to be no different than arguing about how many angels could dance on the head of a pin.  Which, I suppose, explains why I went into science and not philosophy.

Nor am I talking about hair-splitters who say that even pure water isn't pure H2O -- that in a glass of pure water, some of the molecules are dissociated into H+ (more correctly, H3O+) and OH- ions.  I call them "hair-splitters" because under ordinary conditions, out of every 10,000,000 molecules of water, 9,999,999 of them are in the form of H2O and 1 is in the form of H+/OH-.  (Which, for science-minded types, directly leads to why the pH of pure water is 7, something I could explain further if anyone's interested.)

But no, what I'm referring to here is the people who think that water molecules are not H2O.  In one example the loyal reader sent me -- and one is about all I can stand to look at in detail -- the person argues that water can't be H2O, it actually is O2.

Yes, diatomic oxygen, like the stuff that makes up 20% of the air we're breathing.  So if he was right, we could breathe underwater, which would be pretty fucking cool, but which I clearly refuted fifteen years ago when I nearly drowned in a scuba accident.  I can say from personal experience that what I was attempting to breathe was not oxygen.

Here's a small sample of the argument the person gives, if I can dignify it by that name.  Grammar and spelling has been left as-is, because you can only write [sic] so many times.


[W]ater, as oxygen molecule, is only formed by two oxygen atoms. We think the difference between water and oxygen molecules must be found at the different phase of variation of the intersected gravitational fields that creates their different electrical configurations and spatial symmetries.

For us each material mass has its own gravitational field that vary – expands and contracts – with a specific frequency. When two gravitational fields – from two oxygen masses, by example – intersect, they create in their mutual intersection some new fields with different motions and pressures that are currently known as “chemical bonds”.

To go through the scientific inaccuracies here would take me all day, but let me start out with the most egregious: nothing about the interaction between two molecules, or the atoms within a molecule, has the least thing to do with gravity.  Gravity is (by far) the weakest of the four fundamental forces.  If you compare gravity to electromagnetism -- which is the force that holds molecules together -- electromagnetism is 10 ^36 times stronger.

The only reason gravity seems so strong to us is that we're comparing things to the gravitational pull of the Earth, and the Earth is freakin' huge.  On the scale of molecules, gravitational interaction is so small that it is, for all practical purposes, zero.

The other thing that bears mention is that you can demonstrate that water is proportionally composed of two atoms of hydrogen and one atom of oxygen by the simple experiment performed back in 1976 by me and my lab partner John in high school chemistry, namely running an electric current through water to break it up and collecting the gases in two separate test tubes.  You can show they're not the same by inserting a lighted wooden splint into the two tubes -- the one with the hydrogen will give a musical little "pop" as the hydrogen around the mouth of the tube ignites with the oxygen in the air; the one with the oxygen will begin to burn merrily.

Or, you can do what John did, which was to bubble the hydrogen gas into the oxygen tube, and then insert the lighted splint.  The result was:

... as the two gases, in exactly the right proportions, combusted back into water.  This left John holding the remains of a broken test tube, wearing a terrified expression, with his eyebrows singed off and his hair blown back in the fashion of a Looney Tunes character who has just had a gun fired directly into his face. 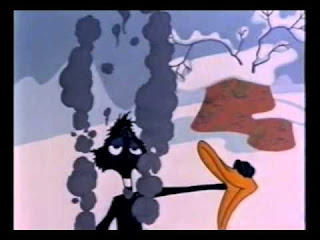 It also bears mention that this is the same reaction that did this: 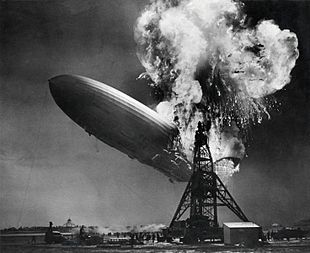 So the weight of the evidence is very much in favor of water being dihydrogen monoxide.  Just as well; rewriting all those textbooks would be a serious pain in the ass.

It's unsurprising, as I mentioned, that many of the Water-Is-Actually-Oxygen people are also The-Earth-Is-Flat people.  Once you've decided that (1) evidence and logic are inadmissible for determining the truth, and (2) all the experts are lying to you for their own nefarious purposes, the jig is up.

Now, I need to go have another cup of coffee, and see if I can reconfigure the banana pudding in my head back into neural tissue.  The vanilla wafer crumbs are making the inside of my skull itch.

Posted by Gordon Bonnet at 3:06 AM